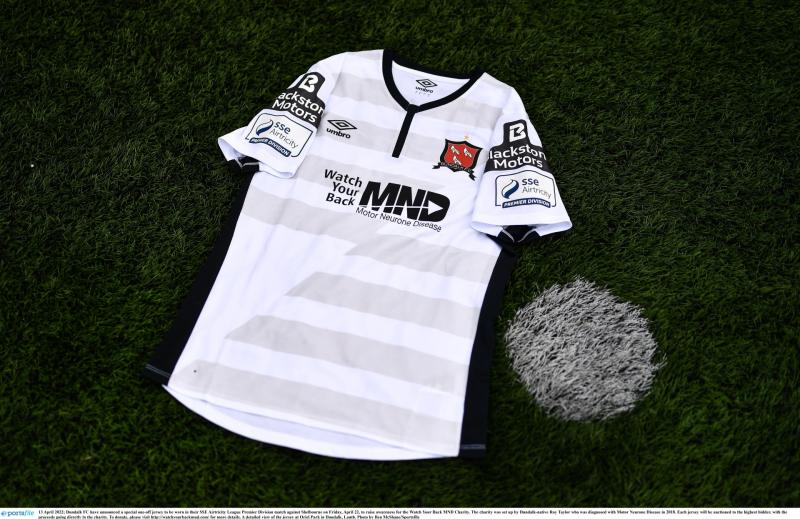 The special one off jersey, with the logo of Watch Your Back MND on the front, will be worn by Dundalk FC players on Friday night before being auctioned off to raise funds for Motor Neurone research

Next Friday night Damien Duff brings his Shelbourne side to Oriel Park in what could be a crucial clash for both sides, who are in need of a morale boosting win as the second round of fixtures gets underway.

While the possible result will be what plagues the minds of Lilywhites supporters in the lead up to the game on Friday night (kick Off 7:45PM), regardless of a win, loss or draw they will be happy with the knowledge that the fixture will help raise funds for charity.

Yesterday Dundalk FC confirmed they will wear a one-off, charity jersey for the tie with the Dubliners in a bid to raise awareness and funds for Motor Neurone Disease.

For one game only club sponsors BetRegal will be replaced on the front of the jersey with the logo of Watch Your Back MND, an organisation set up by Dundalk-man Roy Taylor, who was diagnosed with Motor Neurone Disease (MND) in 2018.

Each unique, player's jersey will be auctioned ahead of the game with the funds going to Research Motor Neurone, a charitable organisation for MND research. A bucket collection will also take place during the night.

Roy, who represented Ireland with his band Jump The Gun at the 1988 Eurovision Song Contest, has refused to succumb to the debilitating condition that currently has no cure or effective treatment.

“When I was told I had MND, I decided there were two things I could do; roll up in a ball or roll up my sleeves and try to do something about it. The latter is exactly what I decided to do,” said the father of four.

Since then, the Taylor family have been avid campaigners and fundraisers for MND. In October 2020, Roy released a song with his son Terence that went to number one on the Irish iTunes charts. A follow-up single with his daughter Ella followed last November.

The Taylor family, along with fellow Louth-man and ‘MND warrior’ Sean Woods, also lent their support to former RTÉ journalist Charlie Bird ahead of his recent ‘Climb With Charlie’ which, to date, has raised over €2 million for the Irish Motor Neurone Disease Association and mental health charity Pieta. To coincide with Charlie’s event, a local ‘Climb the Saddle of Slieve Foy’ fundraiser raised over €20k.

Dundalk Chief Operating Officer Martin Connolly was delighted the club has a chance to use their brand's influence as a way to highlight what is happening in town, while also thanking club sponsor's BetRegal for allowing this charitable cause to go ahead.

“Roy and Sean and their families have shown great courage over the past four years and we are calling on all of our supporters to get behind this fundraiser and help the Taylor family - and the many other families around the country - in their battle against Motor Neurone Disease" stated Connolly.

“We would like to thank our main sponsors at BetRegal for initiating this brilliant initiative and we would also like to thank the FAI for their support. We hope this campaign will provide Watch Your Back MND with a platform to raise awareness and much-needed funding of this devastating disease.“

There are a total of 24 shirts available, 21 outfield jerseys, two goalkeeper jerseys and an exclusive shirt with ‘O’Donnell 6’ printed on the back.

The bidding for each jersey starts at €100 and must be submitted to auction@dundalkfc.com along with a contact name, number and the jersey you would like to bid on. Bidding closes at 9.30pm on Friday, April 22nd.