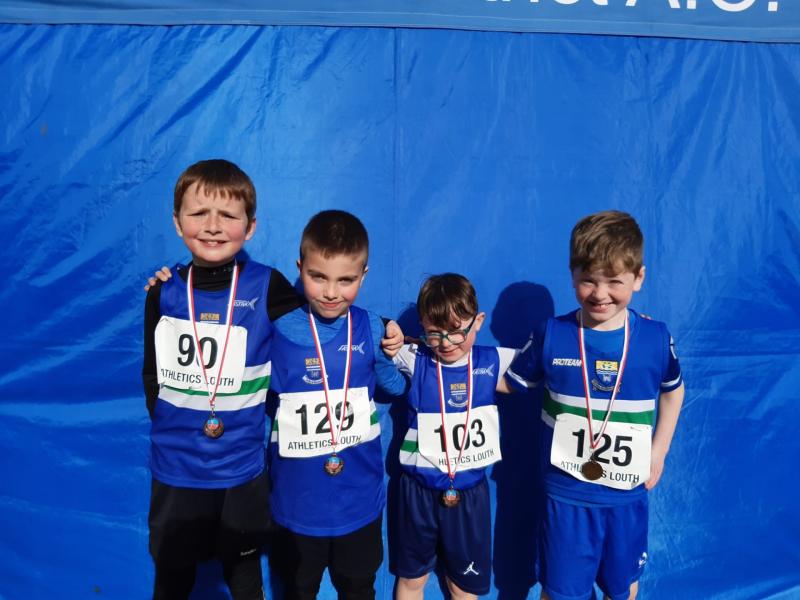 The Track & Field season got off to a flying start with record numbers at the Pre-Louth Championships in Bush last weekend and all Ardee’s juveniles thoroughly enjoyed the whole experience with 38 of them competing in all ages from U8 to U17.

Representing the U8s were newcomers Freya Whelan, Aisling Musiime, Gerard Thornton and Charlie Malone.  All ran, jumped and threw their best with Aisling taking gold in the Girls 60m and Turbo Javelin, while Charlie came second in the Boys 60m and first in both the 300m and Turbo Javelin.

Competing in the U9 events were, Isobella Whelan, Elise Dardis and Rian Lynch.  Newcomer Isobella ran her heart out to come fourth in the Girls 60m final with Elsie taking bronze in the 300m and Rian coming third in the combined Boys U9/U10 Turbo Javelin.

This giddy bunch stuck together and gave their all with both Tess and Evie taking first and third respectively in the combined U9/U10 Turbo Javelin and joined by U9's Rian Lynch, Frank, Cillian and Sean took home the bronze in the Boys U10 Relay.

The U11s, Rhona Keenan, Sophia McKenny, Sachin Chanda, Daire Halpenny and Alfie O'Sullivan tried it all with success on the day going to Sophia McKenny who grabbed the bronze in the 600m.

More gallant efforts from our U13s, Daniel Cirdei, Max O'Sullivan and Oran Lynch who joined newcomer Liam McGahon in the U14 Boys Relay to take home the Silver.

U14s Aoife Pentony, Emma Boyle and Jessica McCarron ran well through the heats and joined by U15s Molly Keenan and Charlotte O'Shea, Aoife and Emma ran their hearts out just missing out on a medal in the U15 Girls Relay.

Newcomer Luke Kenny ran well in the Boys U16 track events as did Caoimhe Carolan in the Girls U15 100m with Dylan McCarron taking silver in a very close Boys U15 100m final.

He was soon followed by Charlie Sands taking gold in the Boys U16 100m, silver in the Shot Put and bronze in the 800m. Jack McCarron was the club’s oldest competitor on the day, taking home the gold in the combined Boys U17/U19 Long Jump.

US ambassador to Ireland pays visit to Cooley Peninsula

US Ambassador to Ireland Claire Cronin
ADVERTISEMENT - CONTINUE READING BELOW