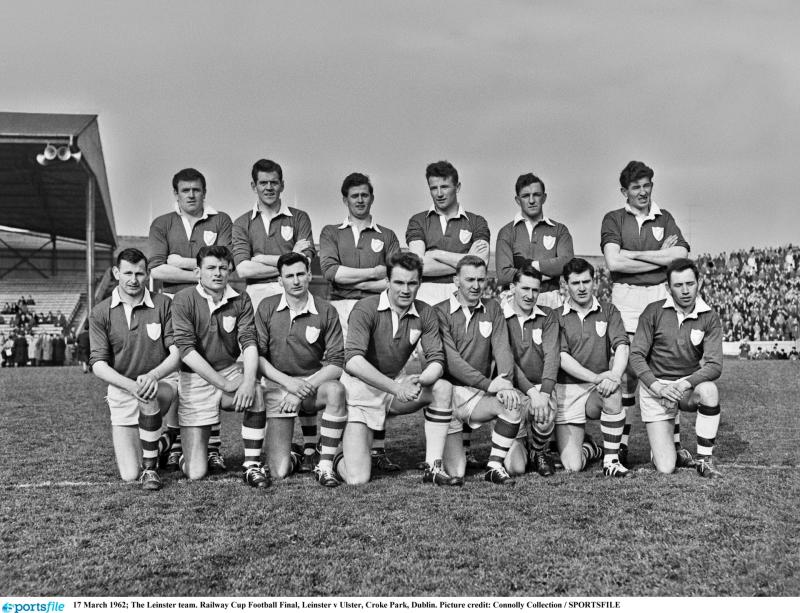 The 1962 Leinster football team that competed in the Railway Cup Final in Croke Park on St Patrick's Day. This was the first football match broadcast by RTE. (Pic: Sportsfile)

Television itself, like the televising of Gaelic games, was new to this country in the early 1960s. Telefis Eireann, as it was then known, had its initial broadcast in 1961, and it was on St Patrick’s Day in the following year that the first GAA match was shown live, Munster against Leinster in a Railway Cup Hurling final.

It was with some apprehension that the GAA embraced this new-style coverage of its games, having previously relied on radio, in particular the voice of Miceal O’Hehir.

Initially, the only games covered live were the All-Ireland senior finals and the Railway Cup semi-finals and finals in football and hurling. The first broadcast in colour was the 1971 hurling final between Tipperary and Kilkenny.

Maybe had some delegates at a Central Council meeting had their way, there would have been no coverage. The following is a report of the meeting carried in this paper in September of 1962:

The question of live televising gave rise to a lively debate at a meeting of the Central Council on Friday of last week, when Mr S Flood (Louth) forecast that at the rate of present damage being done by televising of games, there would be no Association in ten years.

“Our aim should be to promote the games on a club level. The club is the basis of the Association, and if we wipe out the club by allowing television to harm their affairs, we will not be in existence in ten years,” he said.

Mr M O Ruairc (Kerry) said those who imagine television will do wonders for the Association have their heads buried in the sand.

He claimed the that the Munster hurling final had been greatly hit because the Kerry v Dublin match had been televised; irreparable damage had been done to the game all over the world by the televising of matches.

Mr L McAlinden (Leitrim) said that the £10-10-0 fee for televising games was a completely unrealistic one.

“It’s all right saying that it is justified by the fact that we retain certain rights, but if we made the fee £1,000, we would retain the same rights.”

In reply, the President, Mr Hugh Byrne (Wicklow) said that the £10-10-0 was not a fee, but was instead inserted into the contract on the advice of the Association’s solicitor.

“Telefis Eireann lives chiefly by advertisements, and our games do not help them in that way, as the State is prohibited from displaying commercials during the televising of GAA games, and, anyway, the agreement stands only for 1962, until September 23rd to be precise.”

He did admit there was a “big leakage” for the Cavan v Roscommon semi-final. Mr A Murray (Armagh) thought it was too soon to jump to “panic stations”, as attendances may build up again.

Mr P McFlynn, President of the Ulster Council, felt that allowing TV into Croke Park was one of the great things the GAA had done.

Letters from Tyrone, Leitrim and Louth County Boards claimed that the televising of games was having a bad effect on gates.

Mr Byrne said that the Association had no illusions on the matter. “It is proper for you to make your complaints beforehand and anyone can make a mistake.”

When Dublin appeared in the 1963 final, taking on Galway, the attendance was 87,106, a figure that has yet to be beaten, and won’t be unless the structure of Croke Park is altered to allow for the current maximum capacity of 83,300 to be increased.