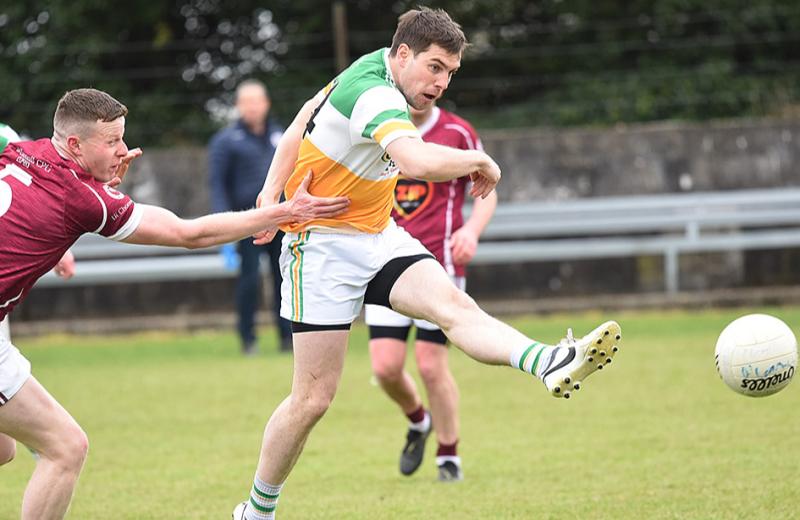 A fine performance from Sean O’Hanlon helped Clan na Gael open their Division Two campaign with a victory as they recorded a four-point win over Oliver Plunketts on Saturday evening.

The corner forward chipped in with a personal tally of 2-4 as the Dundalk men held off a second half revival from the Plunketts at Mell.

The opening period belonged to the Clans as O’Hanlon found the net twice to see his side lead by 2-7 to 1-3 at half time. A goal from Sean Boyle helped the hosts retain hope for the second half.

The Plunketts raised their game in the second period and cut the gap to four points but the Clans defence held strong to ensure their side got off to a winning start.

Hunterstown Rovers struck three late points to snatch victory away to Kilkerley Emmets on Saturday night. Glen Mathews, Tony McKenna and Daithi Carroll landed the decisive points as Hunterstown made a winning start in their bid to land the Division 2 title they narrowly missed out on last season.

The game began with a Cathal Bellew point only for Hunterstown to hit back through Carroll, Alan Landy and Mathews. In an end-to-end game, Kilkerley levelled through Eoghan Smyth and Conal McEneaney but it was Rovers who scored the only goal of the game through Aaron Levins just before the break to lead by 1-5 to 0-5.

Fionn Cumiskey came to the fore for the hosts as he contributed six second half points in a fine display off the bench. Despite losing Brian Brady to injury, Cumiskey’s scores had the Emmets leading by a point entering the closing stages.

However, it was Hunterstown who found an extra gear in the closing stages and three unanswered points saw them secure the win.

Roche Emmets had to withstand a Jack Butterly inspired third quarter revival before securing a deserved victory away to Naomh Fionnbarra on Saturday evening.

The teams shared the opening four points before Roche took a lead which they never relinquished with some good points from the Byrne brothers, Shane and Mark.

The Barrs rallied with a 45 from Hugh Osborne after a good goal chance was deflected wide having twice hit the crossbar. A Jack Butterly free kept the Barrs in touch as they trailed by 0-7 to 0-4.

The Faughart men made the brighter start to the second half with a couple of points before two goals from Jack Butterly had the Togher men level going into the last quarter.

Roche then took the game by the scruff of the neck and reeled off a number of points and goals from the Byrne brothers and that saw them take a commanding lead.

A third major from Butterly with another excellent finish to the bottom corner proved little more than a consolation for the hosts.

St Josephs got their Division Two campaign off to a winning start with a ten-point victory over the O’Connells at The Grove on Sunday evening.

The visitors started better with points from Alan McKenna and Conor Neary and a couple of minutes later they had the ball in the net after a good move was finished by Craig Doherty.

A Robert Quigley free got the Bellingham side on the scoreboard but his opposite number 13 Alan Quigley pointed to maintain their five-point lead. Points from David Hoey and Quigley reduced the margin to a goal, but Alan Quigley and McKenna helped increase the gap to 1-5 to 0-4 at the break.

The home side got the first point of the second half from Quigley and a couple of minutes later they were awarded a penalty and Agnew made no mistake from the spot kick to leave one between the teams.

It was then that the game turned as the Dromiskin men hit a purple patch scoring 2-3 without reply with the goals coming from Daire Smyth and Alan Lynch and the points from Alan Quigley and a brace by Ben Collier.

In between all that the Bellingham side were reduced to 14 when Niall Conlon received his marching orders and there was no way back for the hosts as the Joes went on to record a comfortable win.

Possibly the game of the entire round of league fixtures. This Division Two encounter in the Gaelic Grounds was most certainly the only draw.

Jordan O’Donoghue was the man who held his nerve for the Irelanders in a tense finish. The visitors were in control and looked on course for victory thanks to goals from Cathal Ferriter and Dean Maguire.

O’Raghallaigh’s battled back and nearly stole the two points on offer with Ruairí Moore excellent in the fightback. Barry Flanagan and Danny Reilly came off the bench to hit the back of the net, but O’Donoghue would settle the matter with his only point from play.

Dundalk Gaels got their league campaign off to the perfect start with a double score win over St Kevins on Saturday evening in Division Two at the Ramparts.

The home side got the perfect start when Thomas O'Connell flicked to the net for the first of two goals with the evergreen Sean McCann instrumental in the perfectly floated ball in. Lee Crosbie settled Thomas McNamee’s side with a brace of frees.

O'Connell netted his second goal of the game after claiming a Dylan McKeown high ball ahead of the Kevins’ goalkeeper and full back. Another placed ball from Crosbie made the scoreline 2-5 to 0-4 at the turn.

The second half had an inevitable feel to it with the Gaels happy to keep possession and the Philipstown men at arm’s length. Louth U20 McKeown was in fine form and importantly kept the scoreboard ticking.

Kevin’s found the scores hard to come by, Cameron Maher pointed their first from play and Cian Callan netted a consolation goal at the death, but the Gaels were comfortable winners in the end.