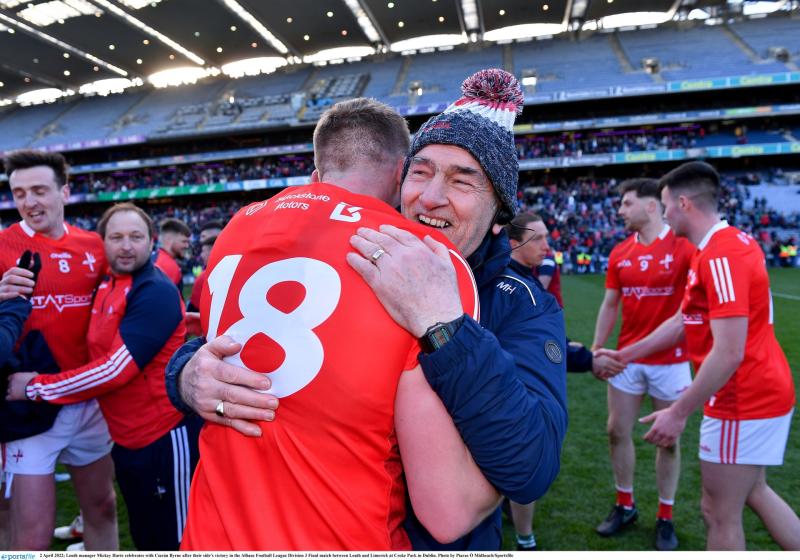 What a roller coaster of a few months it has been for all associated with Louth GAA. Who would have thought as The Wee County struggled against Laois back in January that a few months later Sam Mulroy and Co would be walking up the steps of Croke Park as league champions.

The buzz is certainly back among GAA fans in Louth, who got to enjoy an all to infrequent trip to HQ on Saturday, but got to see the even more rare feat these days of an actual victory at HQ. The men that orchestrated the resurgence, none other then Mickey Harte and Gavin Devlin.

Speaking to the Democrat earlier this week, you could sense the joy the Tyrone native got from the victory, despite a Division Three title not even coming close to the highs he has experienced as a manager.

“I think it is great for the players because they have worked hard” he exclaimed. They’ve been very acceptive of what we are trying to coach them and what we want them to do. Getting these sort of successes, that really endorses the fact we are moving in the right direction.

“I was so delighted with the way they took to Croker; they were obviously nervous, but I think they left that aside when they got on the pitch and managed it well. I saw no nerves out there, only committed faces and it was great as there is so many of them making their debut in that arena.”

And you could not say the success wasn’t hard earned. The Wee County trailed by a point at half time, but Harte added that they never felt the pressure as they headed back down to tunnel. They knew that they had enough in the locker to turn things back in their favour.

“It is always a concern being behind at half time. Any game when it is a close encounter, every ball counts. I think we were OK in the fact that whatever breeze was there we were against it in the first half, that can have an effect on your shooting.

"It was important that we stayed in touch, a significant gap gives teams that confidence to push on but I think we put on a battling performance in the first period more than a performance to be proud of.

“But that is what happens sometimes, if you battle hard then you create the environment for when your purple patch comes, then your still in a good place to push on.”

And push on they did, a final rally of scores putting an extra gloss on the scoreboard not present for most of the final.

Harte was always expecting a battle from the Treaty men and feels the real turning point was the superb goal from Liam Jackson. From that point on the Wee County never looked back.

“Limerick are a very seasoned team, a well-coached team and are maybe more mature then our players are in terms of their development. They are a physically imposing team with plenty of good footballers, that’s why they got promoted.

“We had to respect that, we knew it was never going to be a walk in the park, it was going to be a battle right to the end and thankfully we got the goal which ended up being a very significant score in the game, at a time when we needed some sort of push.

“They were in control of the final at that time, then that sucker punch of a goal gave us some new energy and maybe deflated them a little bit too.”

Mickey Harte is a long time in this sphere as a GAA manager and during that hugely successful career he has had to make big calls that can make or break a game. Saturday evening was no different as he made one big change to starting 15 named in the programme.

At the last moment Ciaran Byrne, the Former Aussie Rules star, was recalled to the starting 15 having got used to fulfilling the impact role so far this year. The call ended up being right, the St Mochtas man was immense as he glided around the hallowed turf in Croke Park.

“He has been carrying an injury all year, that is why we have been using him sparingly to date” explained the Glencull native when asked why he been benched so often.

“The last few weeks he has been able to do more training, has had more game time out on the field, as well as crucially getting more minutes into his legs as the year has gone on. You need players who will always perform well on the big stage, when it matters, Ciaran Byrne is certainly of that mould.”