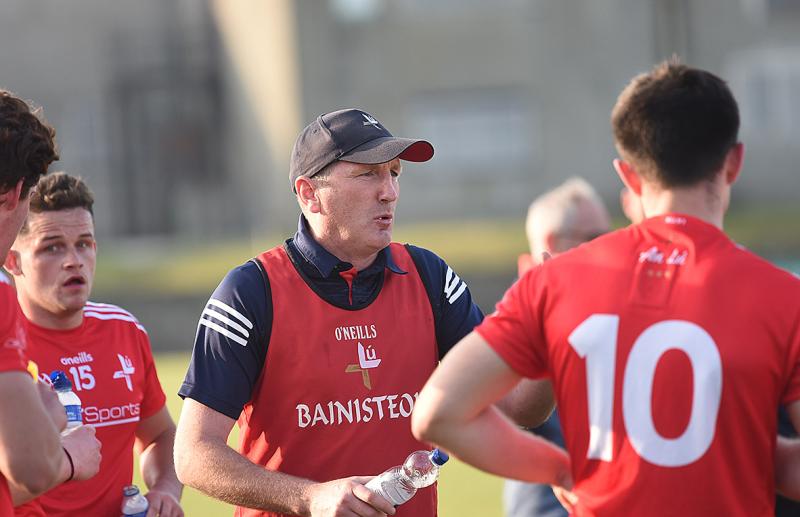 Kevin Corrigan at the Faith Fields

It was heartbreak for the Louth U20 Footballers, who bravely pushed All Ireland Champions Offaly in their own back yard, only to succumb to late a fightback that sees them sadly exit the Leinster Championship.

The Faithful County were pushed all the way by a very decent Louth side who were not far away from an upset win. Indeed, the fact that the visitors scored thirteen times compared to ten for Offaly was in some ways a fair reflection of this game.

However, the home side’s three goals trumped everything and got them through to the next round, the cut-throat knock-out format meaning it is the end of the road for the Wee County.

Offaly were very relieved to win. With Louth looking like pulling off an upset win, they finally got their intensity levels right in the closing quarter. Big performances by Lee Pearson, John Furlong, Morgan Tynan and Keith O'Neill being absolutely pivotal to the win.

Louth to their credit gave it a very good go, dominating the first twenty minutes and the first fifteen minutes plus of the second half.

There was a time in the first half when it seemed they couldn't miss as they got points from all over the place. Sadly these purple patches never saw the umpire raise a green flag. Meanwhile Offaly got three, two in the first half and one 19 minutes into the second half.

The second half three pointer from substitute Jamie Guing was the decisive score as he finished well after good work by Morgan Tynan and that gave Offaly a 3-5 to 0-11 lead at a crucial stage.

They had been level up to that point and Louth were beginning to believe they could win it. Even after Guing's goal, they rallied well and got it back to the minimum with points from Dylan McKeown and Beanon Corrigan with four minutes left.

Extra time loomed large and Louth had attacks that could have yielded an equaliser. Unfortunately, Offaly defended fiercely. They lifted the siege in injury time and a sensational Lee Pearson break out of defence yielded a Jamie Guing point.

Three minutes into injury time, Morgan Tynan worked his way in from the left and fisted over a point that meant Offaly would not be beaten in normal time. Louth had one last desperate attack, but John Furlong won a great ball and Offaly were home and dry.

The first half was an entertaining, wide open and keenly contested affair with Louth the better side for the opening twenty minutes. Yet somehow Offaly got their noses in front by half time, 2-4 to 0-9.

Offaly hit the net for the first time when Flynn blasted home after a super turnover by Lee Pearson in defence. That gave them a 1-3 to 0-5 lead. Louth had been good value for their advantage up to that point.

Their second goal came from a Keith O’Neill penalty in the 20th minute after Josh Finlay had made a super double save from Marcus Dalton. Ronan McBride picked up the rebound and was fouled resulting in the penalty.

Declan Kelly’s troops were 2-3 to 0-7 up at that stage, but Louth should have had a couple of goals themselves – Sean O'Toole had denied Kieran McArdle with an excellent save in the 9th minute and McArdle was also wide with a good chance in the 19th minute.

Late points from Evan Maher and Ben Collier left Louth a point down at the break and they were very much in the game – the quality of their point kicking was a feature of the first half.

The second half started in a similar vein to the first with the Men in Red driving it on. Karl McElroy got two frees to give them the lead by the 37th minute – McElroy had caused Diarmuid Finneran a lot of problems in the first half, before he eventually got to grips with him in the second half.

Offaly levelled it up with a good Morgan Tynan free and scores were very hard to come by before Guing's goal gave Offaly the initiative.

It was only in the closing ten minutes that Offaly's collective work rate and intensity reached the levels that their manager would have wanted, but the result was the bottom line.

Pearson, Furlong, Tynan and O'Neill all stood up to be counted in the second half with Furlong's and Tynan's contribution significant as they had not been at the furnace in the first half.  A strong final quarter from these players in particular, sadly ended Louth’s championship ambitions at this grade for another year.

It is an unfair end for this group of players, who worked so hard under the guidance of Christy Grimes, the U20 grade being the only level of inter county football that has remained knock out.

In the end they will rue those missed goal chances, the old adage of goals win games certainly proving true in this contest. But having pushed the All-Ireland champions all the way, there is clearly some decent talent coming through that could possibly bolster Mickey Harte’s senior ranks in the years to come.