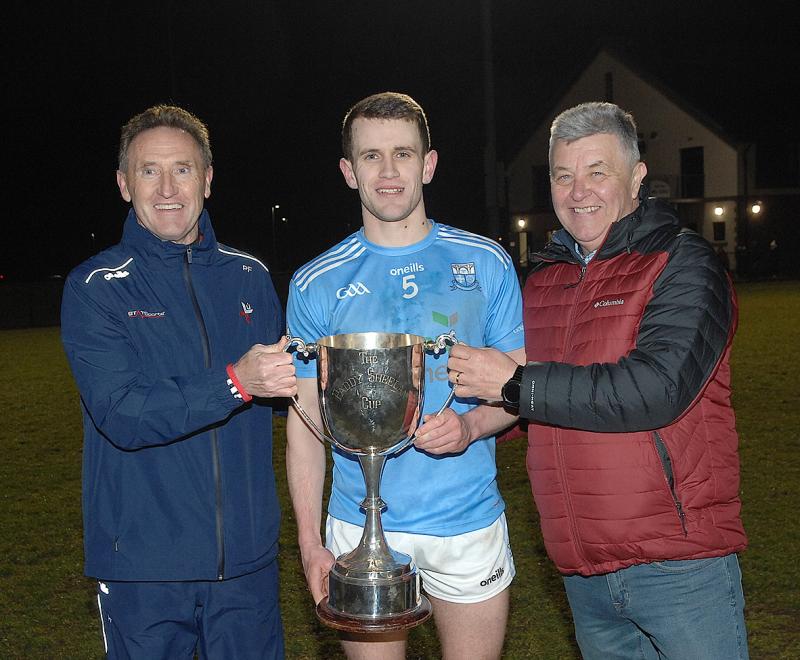 An explosive start for the Newtown Blues proved decisive in the Paddy Sheelan Cup final, an early burst of scores creating a cushion they would never relinquish.

After going one behind, the Drogheda men hit six of the next seven scores, including a vital goal from Conor Brannigan, and despite a gallant fight St Mochtas never really threatened to close the gap, drawing no closer than five points following the goal.

However, the tie will be more remembered for an injury picked by substitute Dylan Farrell. The tie was delayed for close to 40 minutes, as the player laid on the ground awaiting an ambulance.

At that stage there were still a good 12 minutes plus of action to be played and with six points the difference and there needing to be a winner on the night, the small crowd in attendance were left idling in the cold until well after 10. The tie threw in at 8PM.

It was the Louth Village men that got the scoring underway, some nice fielding from Ciaran McMahon resulting in him winning a mark which he calmly slotted over.

However, once The Blues got going, there was no stopping them. They were patient on the ball, keeping it for prolonged periods before doing all they could to pick out their target man Conor Brannigan.

His fielding alongside a confidence in easily coasting away from his marker meant he was a huge threat throughout this final. He carved The Mochtas open time and time again, helping set up scores for Emmet Murray, Conor McGuirk and Jamie Kelly as well as grabbing a point of his own.

Then came the crucial goal on 20 minutes, Brannigan won possession from a high ball before neatly weaving his way around both the Mochtas keeper and a defender. With the hard work done, it was an easy tap in that left the Blues 1-5 to 0-1 in front.

The men in yellow were finding it hard out there, they were forced out wide constantly and before getting a chance to shoot they were often turned over. Yet The Blues still couldn’t quite shake them off, two late scores from Decy Byrne and Danny Kindlon leaving it at 1-7 to 0-4 at half time.

The third quarter was a much more even affair, both sides going score for score. The Mochtas began drawing more fouls up the pitch and with Byrne on hand, those fouls were pretty much free points. Three from the boot of the former County star kept his side in touch.

However, The Blues were doing just enough to stay ahead, the odd score from Brannigan, Emmet Carolan and Conor Moore making sure their six-point cushion remained largely intact.

Then came the unfortunate incident for Dylan Farrell who was only the field as a substitute for the guts of six minutes. Both groups of players regrouped into the warmth of the Darver dressing rooms, before heading out for another warm-up a half an hour or so later.

After both sides went through their ‘pre-match’ prep again and Farrell was safely lying in the ambulance, the tie resumed with neither team seemingly worse for the prolonged break.

The Mochtas continued fighting and almost found a route back into this final when Conor Garland whipped in a ball for Byrne. But in a rare mistake he dropped the ball, allowing the Blues to recycle possession.

They continued to push on in the hope of reducing the gap, but as was the case in the third quarter, any point they got was quickly cancelled out by a mix of Brannigan, McGuirk and Moore while a final score from Jamie Kelly at the death left the Blues a deserving six point winners.