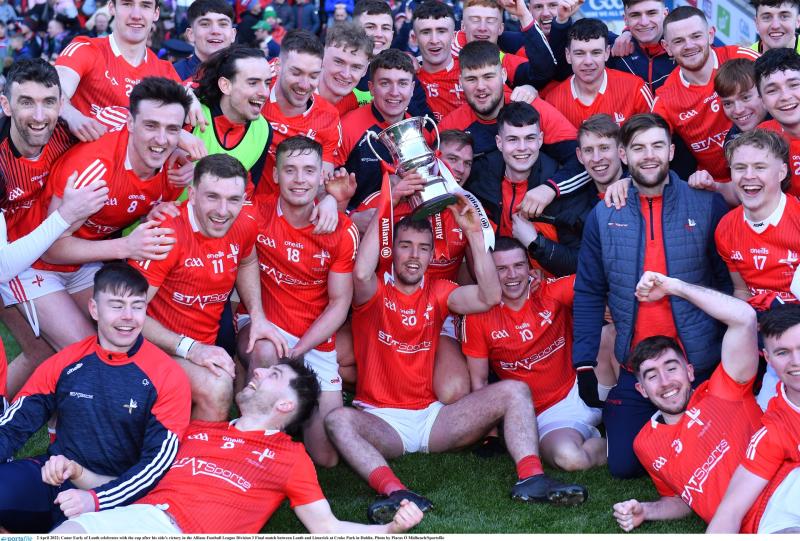 Conor Early of Louth celebrates with the cup after his side's victory in the Allianz Football League Division 3 Final. (Pic: Sportsfile)

Louth have secured their first bit of silverware of the Mickey Harte era with a stunning five point win over a fancied Limerick side.

The Men in Red in Red trailed by a point at half time, as the Treaty men took advantage of a lull from their opponents midway through the opening period.

However a spectacular goal from Liam Jackson turned the tie around on 53 minutes and they never looked back, earning this divisional crown for the first time since 2011.

The Wee County showed their quality early, the runs of Donal McKenny proving to be a huge threat in the early stages of the contest.

Yet it was Limerick who opened the scoring after three minutes, Darragh Treacy forcing a foul out of Bevan Duffy, with the close range free duly tapped over by Josh Ryan.

Louth returned fire two minutes later, another McKenny solo run starting of a good team move that eventually resulted in a 45. On his biggest stage yet, place kicker Sam Mulroy calmly slotted over the blackspot.

The tactics of both sides quickly became noticeable, Louth wanting to play the ball at pace and get it from one end of the field to the other as quick as possible. Meanwhile the men from Munster favoured a more patient approach, going through the phases in search of a better opening.

A superb mark from Daire Nally led to Louth’s next score, as he took it quickly to tee up Ciaran Byrne who was a late addition to the starting line up as Louth took the lead for the first time.

At this stage Mickey Harte’s troops were well on top and had two great goal chances on 12 minutes. The first fell to the Louth captain who did well to get onto a looping pass over the top from Ciaran Downey. From close range Donal O’Sullivan made a great save.

Limerick ended up going right up the field and bagging a point courtesy of Adrian Enright, only for Louth to pounce back up the field at pace. This time Mulroy turned provider for Tommy Durnin, his effort blocked out for a 45 which Mulroy neatly slotted over.

Limerick were beginning to draw a lot more fouls out of the Wee County, but luckily, they were coming out of scoring range, with many opportunities for Louth coming directly as a consequence of turning the ball over in their own half.

As was the case with Daire Nally’s score, the young forward finishing off a counterattack involving Niall Sharkey, Conal McKeever, Byrne and Mulroy. However, the momentum of the contest turned as quickly as this counterattack, Louth going nearly 20 minutes without a score.

Leonard Grey, Mulroy, Downey and Durnin all missed chances for The Wee County, while in contrast Limerick struck five points in a row.

Hugh Bourke (2), Peter Nash, Michael O’Donovan and Enright all raised white flags, as the men in Green began dominating the possession stakes. This turn in momentum coming as they began moving the ball quicker.

Just before half time Mulroy tagged on a late free to end Louth’s baren shooting spell, leaving them trailing by 0-7 to 0-6 at the break.

Limerick went back to their slower, more patient gameplan as the final resumed, going through phase after phase, stretching the Louth defence for the majority of the first three minutes. Yet they never buckled and eventually turned the ball over.

Sadly, the resulting attack came to nothing, the Treaty men getting forward again with Josh Ryan pointing on 41 minutes to extend their lead. But Louth responded perfectly, a darting solo run seeing John Clutterbuck get on the scoresheet.

Once more Billy Lee’s side responded with a score of their own from the boot of Josh Ryan, but wides began creeping into their game, two poor misses registered either side of a Byrne point.

After winning every single one of their kick-outs up to this point, Limerick were finally turned over on 48 minutes, with Byrne coming close to bagging a goal only for his shot to be blocked. But Louth fans would not be waiting for a green flag much longer.

Peter Nash and Mulroy traded scores before a decisive goal, got on 53 minutes in sublime fashion by Liam Jackson. Dan Corcoran managed to turn the ball over deep in his own half and quickly offloaded it to Byrne.

The St Mochtas man spotted the run of Jackson, who instead of catching it punched it off the ground to force it past Brian Fanning. Now left one on one with the keeper, the Ardee ST Marys clubman made no mistakes in burying into the back of the net.

Another turnover followed as Ciaran Downey tracked back to regain possession for Louth, this turnover eventually leading to a fine score for Durnin that left Louth up by 1-10 to 0-10.

The Treaty County tried to bounce back with a goal of their own, coming closest on 61 minutes when Paul Maher linked up well with James Naughton. His effort went too high and after deliberation was not even awarded a point.

From that miss onwards Limerick were a beaten team, as the scores continued to come for Byrne (2), Mulroy and Sharkey. With the intensity quickly dropping, Limerick tagged on a further three frees from Robbie Burke, but at this stage the result was beyond doubt.

Mickey Harte had delivered on his promises and brought success and a National Trophy to the Wee County. The question will be now can they continue their momentum with a run at what looks to be the most open Leinster Championship for some time.

PICTURES: Out and About at quiz night in Dundalk