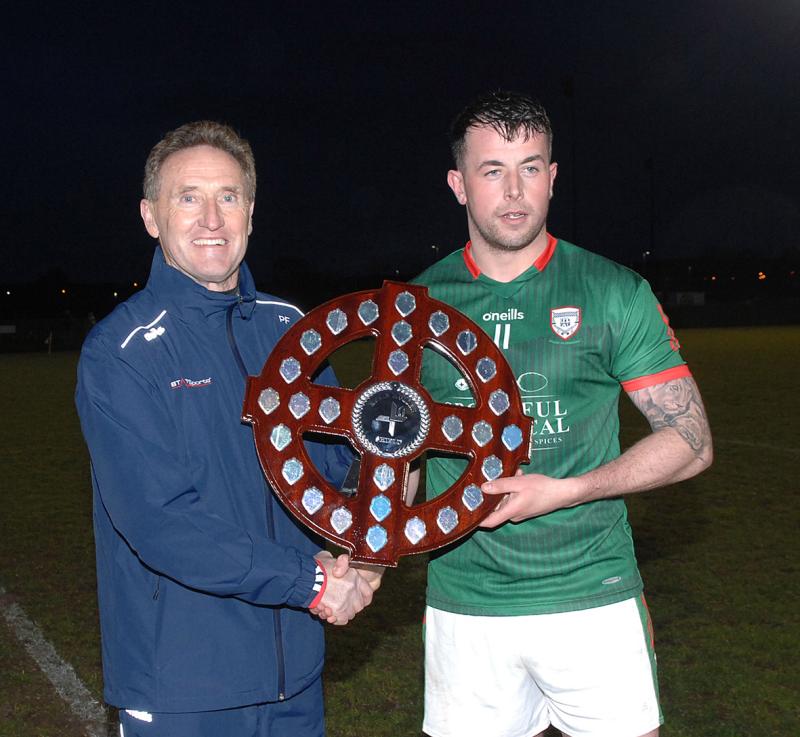 Glen Emmet’s started off 2022 the way they ended last season by winning another trophy, this time the Kevin Mullen Shield as three goals were enough to brush aside the challenge of Na Piarsaigh/Blackrock.

Two early goals from James Butler and Robbie Byrne helped the Tullyallen men created an eight-point cushion, before a second quarter rally kept the newly amalgamated team in with some of hope of a fightback.

However once again the reigning Junior champions bounced back with a third goal, this time from Alex Carolan, which essentially killed all competitiveness from the match, the final deficit of 11 points a fair reflection of their superiority.

Within the first 60 seconds of action Glen Emmets had taken the lead, one which they never relinquished, Keith Boylan turning the ball over following a Na Piarsaigh kick-out and duly playing in James Butler.

Five minutes in they had their first goal of the night, Butler soloing past three defenders and then firing a bullet from his boot which the keeper had little chance of saving.

It was already becoming a tough night for the Dundalk based club, who were struggling to win a lot of their own kick-outs, Evan English winning pretty much any aerial ball thrown at him.

Even when going short, it was becoming difficult for Na Piarsaigh to get out of their own half, going through phase after phase without getting far up the field. That meant chances to score were rare in the opening 20 minutes.

This was due to constant Glen Emmets pressure. With Keelan O’Neill often the only man left inside, they had the numbers to defend and force turnovers. This coupled with a dominance from kickouts saw score after score come their way.

The second goal came on 12 minutes, Robbie Byrne getting onto the end of a wonderful team move. This alongside points from O’Neill and Carolan left The Emmets 2-3 to 0-1 in front.

Na Piarsaigh didn’t back down from the challenge, extra work rate saw them finally begin to break down The Tullyallen defence and they tagged on the next three scores of the final courtesy of Mark Larkin, Rob Murphy and Michael Begley.

During this period of dominance, they kept Glen Emmets to just a single point coming from one of only two chances created during a 16-minute barren spell. Yet with those early goals, they still led by 2-4 to 0-4 at the break.

The Dundalk men needed a fast start, however instead it came from the Junior champions who bagged 1-1 in quick succession to effectively end any hopes of a comeback.

Pacey running was a problem for Na Piarsaigh throughout the 60 minutes and it was in this fashion that Glen Emmets got their next two scores. First up was James Butler who grabbed a point before the killer blow of a third goal got by Carolan following another decent solo run. Game over.

From here the intensity dropped as both sides emptied their benches, with everything Na Piarsaigh threw at the Emmets on the scoring front quickly cancelled out.

Begley and Tommy Murphy pointed to narrow the gap, but in reply Alex Carolan tagged over three in a row to leave his side coasting, 3-8 to 0-6 in front. A point apiece late on followed from Begley and Butler, but at stage the Shield was truly the property of Glen Emmets.