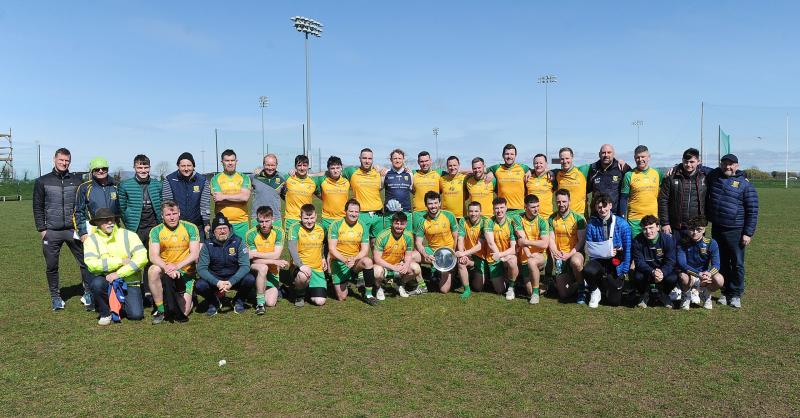 Stabannon Parnells made it a successful start to the season as they captured the Kevin Mullen Plate at Darver on Sunday morning thanks to a victory over Sean McDermotts.

A strong first half display set the Parnells on the road to victory as they found the net three times to build up a commanding lead.

The Seans hit back after the break, but Stabannon were not to be denied as impressive scoring from Robbie Callaghan (1-8) and Derek Crilly (2-2) secured the win.

Despite playing against the elements, it was the McDermotts who opened the scoring. However, it wasn’t long before Stabannon found their rhythm as Derek Crilly and Niall Cluskey started to dominate midfield, while the incisive runs by Crilly and centre-half back Bobby Butterly, saw them create a series of chances.

Goals from Robbie Callaghan, Derek Crilly and Niall Fanning ensured that their side went in at the interval with a commanding 3-9 to 0-4 lead at the break. Early in the second half, Crilly added his second goal to put the result beyond any doubt.

However, the McDermotts rallied and with Danny Reilly, Kevin McMahon, Ian Corbally and Emmet Duffy coming to the fore, they enjoyed some good possession.

Goals from McMahon and Lorcan Myles provided the reward for the Seans but ultimately it proved little more than a consolation as the Parnells held out for a deserved win with Tadhg Carroll adding a fifth goal for the winners.