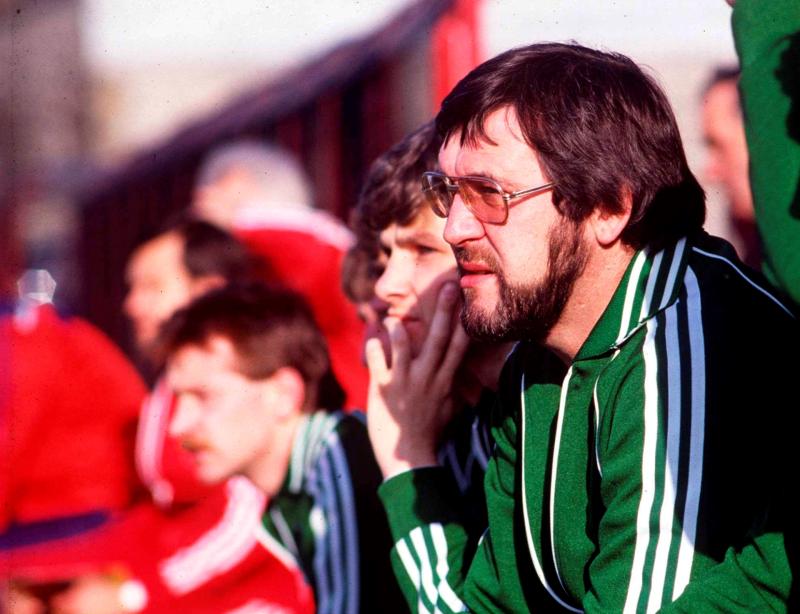 When Stephen Kenny was named Republic of Ireland manager in succession to Mick McCarthy, it was written here that he wasn’t the first with a Dundalk football club connection to hold the post. He was the fourth, in fact, following in the footsteps of Liam Tuohy, Eoin Hand and Steve Staunton.

After he had put a fair few Dundalk full-backs through the wringer at Oriel, haring it down the wing in a success-laden career with Shamrock Rovers, Tuohy took over as Dundalk manager for a couple of seasons.

While at Oriel, he was appointed Republic of Ireland manager, and continued filling a dual role for twelve months before turning his full attention to the Ireland job.

Staunton togged out in the black-and-white at underage and then made it across to Liverpool for what would unfold as an exceptional career, his performances in the famous red jersey matched by what he had to offer in his 100-plus outings for his country. Three World Cup finals are testimony to his outstanding talent.

Like Tuohy and Staunton, Eoin Hand’s involvement at Oriel was short-lived. He arrived there as a teenager, having been released by relegated Swindon. He played as a winger and had a few outings. However, he was let go at the end of his first season. That was back in the mid-60s.

Hand moved to Drumcondra – with whom he had begun his League of Ireland career as a 17-year-old – and now a well-built six-footer, was given the chance to play at centre-half. This, he said in a chat with Inside Track last week, was the making of him.

A doddle, perhaps, but he must still have put in the long hours at Tolka Park, because after two seasons he was on his way across the Irish Sea once again, this time to sign for Portsmouth. He spent eleven seasons at Fratton Park and during that time won 20 International caps, most of them when Johnny Giles was player-manager.

Now living in Kerry, Hand takes his seat in front of the telly whenever there’s a game on, but he’s not a big fan of the way the Premier League game has developed.  “It’s a disgrace the way it has gone. It’s all about money, there are fewer and fewer home-grown players involved, and it’s the same with managers.

“It drives me daft to see the simulation that goes on. That’s cheating, and I’ve seen it in schoolboy football as well. I was at a game one day and heard the manager telling a young fella to go down in the box. I went to him and told him that that was cheating. You can guess what he told me to do.

He makes Mo Salah an exception.“I think all young footballers should look at how the Liverpool player conducts himself. He’s a good role model. When he goes down, he’s up as quickly as he can; there’s no faking injury with him.”

There’s another thing on Hand’s ‘let’s cut it out’ list, and that’s players complaining and shouting at the referee. “It should be as it is in rugby, only the captain allowed to speak to the ref.”

So what had Inside Track on the phone to Kerry? Well, word came this way that just as he wasn’t the first with Oriel Park connections to get the Republic job, Stephen Kenny is not the only one to give his adopted Blackrock recognition.

The former Dundalk boss has been living in the seaside village since moving from Donegal, and it so happens that it was there were Eoin Hand’s mother was born.

The former Miss Monica McHugh lived there for a number of years before moving to Dublin to take over the running of the Brazen Head pub, which was owned by her aunt.

Reputed to be the oldest pub in the city, this famous hostelry – which is just across the road from another well-known watering-hole, O’Shea’s Merchant, much favoured by Kerry folk on All-Ireland football day – was then passed on to the by now-Mrs Hand on her aunt’s death.

Has Eoin Hand ever been to his mother’s birthplace? “A few times, but it was more out of curiosity than anything else.” Keep an eye on the radio station, Newtalk’s schedule. There’s a hour-long programme on Eoin Hand coming up shortly.