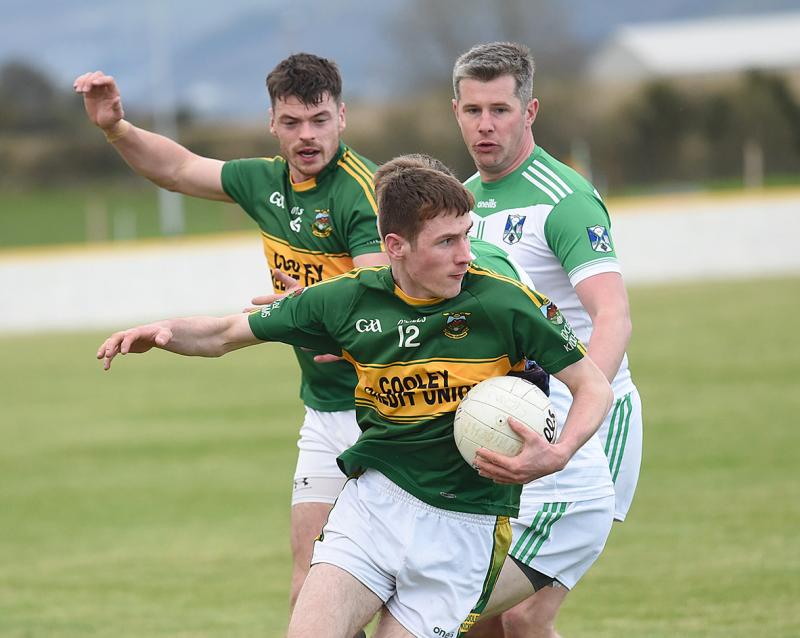 Sean O’Mahonys came back from six points down at the break to secure a valuable a one-point victory over St Mochtas at Louth Village on Saturday evening.

The hosts went into the game on the back of a strong showing in the Paddy Sheelan Cup and looked to be on course for a comfortable win. However, they couldn’t sustain the effort in the second half as the Dundalk men snatched victory.

The Mochtas took a grip of the game in the opening half and goals from Andrew English and Jamie Farrell sent them in at the break with a healthy 2-6 to 0-6 advantage.

However, the Seans turned the tables in the second period. Two early points from play by Conor Martin and Kilcoyne’s right boot after a penetrating run, were cancelled out by the men from the Village, before the Dundalk side started to dominate once again.

Ben McLaughlin slotted over first before Stephen Kilcoyne grabbed the game by the scruff of the neck, first converting a mark after a great catch, then thundered a shot into the net which was just too hot for the keeper to handle, before slotting the equaliser between the posts.

The Mochtas did manage to edge ahead twice more but the O’Mahony’s men didn’t panic and controlled possession enough to win three scorable frees, all of which Ben McLaughlin expertly converted to equalise twice and then secure the win with the third.

Newtown Blues edged past St Brides on Saturday evening with a three point win in the Cardinal O’Donnell Cup, but St Brides will be disappointed they didn’t leave Newfoundwell with a least a draw.

St Brides opened the scoring with a pointed free kick from Patrick Reilly on three minutes but this was cancelled out two minutes later with a well taken point from Emmet Murray.

The hosts edged ahead on seven minutes through Jamie Kelly before another Reilly free squared things up on 13 minutes.

The second quarter saw the home side move up a gear and they kicked three unanswered points from Fergal Donaghue and Conor Brannigan (2) to lead by 0-6 to 0-3 at the break.

St. Brides were the better team after the restart and scored their first point from play on 38 minutes from substitute Andrew Smyth. St. Brides dominated proceedings from here on and had many missed chances to take the lead.

However a brace of minors from Kelly restored the Blues three point advantage. Smyth and Kieran McArdle converted points either side of a Brannigan pointed free kick, which left three between the sides for the remaining seven minutes.

The Newtown Blues defence came under severe pressure late on but good defending, many wides by the visitors and a fine save from Johnny McDonnell kept the Knockbridge men from gaining at least a draw.

The scoring was concluded in stoppage time with a point from Kelly and for ‘The Reds’ with a pointed free kick by McArdle.

A first half goal from Ben Gartlan proved the difference between the sides as the Geraldines made a winning start to the Cardinal O’Donnell campaign.

The game in Fr McEvoy Park saw little to choose between the teams for much of the hour but in the end the visitors did enough to hold out for the win against a determined Kickhams outfit.

Scores were at a premium in the opening half making Gartlan’s three-pointer all the more important as his side went in at the break with a 1-3 to 0-4 advantage.

The hosts battled well in an effort to get back into the game but scores from Michael Rogers helped them stay in front. Cian Connor top-scored for Cooley with three points, but it wasn’t enough to deny the Gers who claimed victory despite losing Rogers and Conor Rafferty to Black Cards.

St Fechins came away with victory over the Mary’s thanks to some greater accuracy from goalkeeper Niall McDonnell’s placed balls. Despite both sides missing a number of county players, this was an entertaining, tight and physical encounter in Bealieu on Saturday night.

The opening half was the closest of the two with both sides struggling to find an opening and hold onto a lead. St Fechins drew first blood with McDonnell opening his account before being aided by scores from Ryan Walsh and Joe Corrigan.

It took Ardee a quarter of an hour to find the range and with some late tackles they drew level thanks to points from Darren Clarke and Carl Gillespie to leave it 0-5 points apiece at half time.

Louth hurlers Paul Matthews and Sean Kerrisk came into the action midway through the half and Mathews made his presence known almost immediately with a point from play followed by a pointed free from Joe Corrigan.

With ten minutes to go McDonnell landed the last of his three points and the Fechins were happy to soak up the pressure. With Paul Clarke’s defence holding strong, Ardee could not find a way to close the gap and suffered their first loss of the season under new manager Cathal Murray.

Craig Shevlin was the hero for the Dreadnots as they pipped Naomh Mairtin by the minimum on Sunday afternoon. Shevlin hit the match winning free in the first minute of additional time in Monasterboice to send the visitors home with all the spoils.

The clash was slow paced and with at least 10 county men missing from both sides who could be surprised. Ciaran Finnegan seemed to be taking his opportunity to stake a place in the starting 15 come championship with the last point of the half to give the visitors a 0-5 to 0-2 half time lead.

Conor Whelan and Gavan Mooney kicked first half points for Fergal Reel’s side, but they were outplayed for the majority. Shevlin ended the half with three points in total.

An early Peter Kirwan goal looked to have sealed the game but the county champions dug deep and chipped away at the deficit with points two Jacks, Murphy and Lynch.

JP Rooney came on to slot home a penalty after Anthony Lynch fouled Val Leddy at the back post. Conor Whelan then levelled the game with a fine effort from distance, but there would be more drama to come.

In the next attack, referee Fr Ryan deemed Whelan to be inside the square after he scored what looked to be a match winning goal. Rooney set him up expertly. However, it was the Clogher men that took a deep breath and went up the field and found a winner from the impressive Shevlin.

Two quick fire goals at the start of the second half sent Mattock Rangers on their way to an opening day victory at home against St Patrick’s.

Rangers midfielder Ben McKenna fired home the two unanswered goals and Johnny Magee’s side were unable to pull back the hammer blows of McKenna’s second goal and having Rory Duffy dismissed for a second yellow card.

Mattock used the numerical advantage well despite points from Barry Dunne and Ciaran Murphy. Wayne McKeever’s side led 1-5 to 0-3 at half time and controlled the game as soon as Louth U20 Liam Flynn found the net on his club debut.

Tadhg O’Connor was excellent for the losing side and kept them in touch throughout but Mattock were too good on the night and Oisin McKenna added a fortunate goal at the death to close out the win.