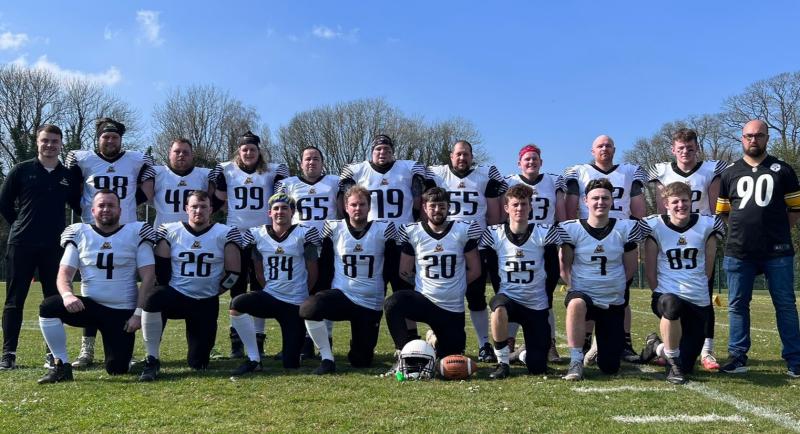 The Louth Mavericks prior to their game with the Antrim Jets

The Louth Mavericks have started the season in scintillating form with two victories from their opening two games against the Jets and Pirates.

Having taken the difficult decision to drop down to AFI Division 2, in order to rebuild due to losing several long-term veterans to retirement and other commitments, they have come out of the gates hot showing everyone that they haven’t forgotten how to play football despite the two year on-field hiatus.

In the opening game of the season the Mavericks travelled to up to Antrim town to take on the Jets in a hotly anticipated matchup between arguably the two strongest teams in the division.

On a beautiful day in the resplendent Antrim Forum the Mavericks started strongly on defence, forcing multiple stops and keeping their opponents out of the end-zone in the first half.

On offense the rustiness was showing early doors as they fumbled the ball three times, turning the ball over twice. Yet once the cobwebs were shaken off, they looked more like their old selves with QB Nathan Hearty running in two touchdowns (TDs) in the second quarter to make it 13-0 at the half.

The second half was a tightly contested affair as the Mavs lost numbers due to injury, with the worst being to LB Dan Marshall who had intercepted Jets QB Scott McClean and had nothing but green grass between him and the endzone only for him to tear his hamstring halfway there, going down in agony.

With the Jets having greater numbers they were able to match the Mavs, trading TDs in the 3rd and 4th quarter, Dan Finley and Gerry Lawless running them in for the Mavs, although the Jets were unable to convert either TD while Declan Mulvihill kicked 3/4 for the Mavs, making the final score a 27-12 Mavericks win.

The Mavericks had no time to celebrate that victory however with their first home game of the season taking place the following Sunday against the North Dublin Pirates.

Bolstered by a good home crowd and good weather the Mavericks ran riot scoring eight TDs in a demolition of the Pirates.

Brendan Simms was running wild in the backfield on his way to 4 TDs on the ground, exactly the total that was requested by his son, Fionn (aged 4), who was watching on with great excitement.

Dan Finley (2 TDs) & Gerry Lawless (1 TD) also got back on the scoresheet while Nathan Hearty threw his first TD of the season to fellow rookie Kaelin Dunne.  Mavs fans will be hoping it’s the first of many TD connections between the pair.

The only sour note on the day came early when Pirates RB Eric Courtney went down on the 3rd play of the game and unfortunately had to be taken to hospital with a serious looking lower leg injury. We wish him a full and speedy recovery.

The Pirates, however, fought hard all game and opened the second half by picking off Nathan Hearty to set up their offense with great field position which they converted and then successfully went for the two point try to bring their total to eight, but with the loss of their Running Back they couldn’t keep up with the Mavs offence on the day.

If the first game could be described as the Mavericks setting out their stall, the second was certainly a statement of intent from the Louth outfit as they look to finish in the top two this year and go to the Division 2 Bowl game in July.

For now though, they will look forward to a few weeks off to heal their sore bodies and get ready to go again with another two games on the horizon, starting with the NI Razorbacks (1-1) at Dundalk Rugby Club on Sunday April 24th.

They are then on the road again, this time travelling to Malahide on May 1st to face the Pirates (0-2) who will no doubt be out to show that they can put together a better display that their last outing. For the rest of Division 2, it’s a case of heeding the Mavericks motto and Beware the Bull.