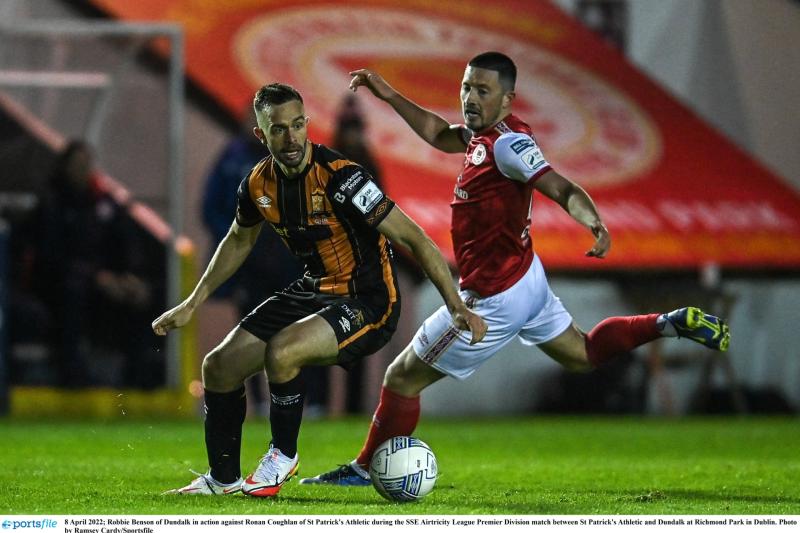 Stephen O’Donnell returned to a hostile atmosphere at Richmond Park as his Dundalk side and St Patrick’s Athletic played out scoreless draw in the SSE Airtricity League.

St Pats had the better of the opening 15 minutes and almost took the lead early on when a calamitous mix-up between Darragh Leahy and Dundalk goalkeeper Nathan Shepperd afforded Darragh Burns a shot on goal; however, Shepperd saved well to redeem himself.

The resulting corner from Burns was diverted wide at the back post by the unmarked Tom Grivosti – while Eoin Doyle had an effort deflected off target not long after that.

On what was his 17th birthday, Adam Murphy played an incisive pass into Ronan Coughlan, but the St Pats forward curled wide after getting the better of Mark Connolly.

Tim Clancy’s side had another good chance on 13 minutes when Billy King rounded Shepperd on the right, but the Scotsman’s final attempt could only find the side-netting.

Having weathered an early storm, Dundalk then settled into proceedings, with Daniel Kelly’s floated cross being flashed wide by the head of Steven Bradley on 26 minutes.

Ex-St Pats player Robbie Benson – from Leahy’s set-up with a diving header – then headed over from close range following what was another period of Dundalk pressure.

James Abankwah crucially blocked out another Benson attempt just before the half-time break, before Bradley headed over from the resulting corner taken by Patrick Hoban.

The first real chance of the second period didn’t emerge until the 63rd minute when Shepperd brilliantly tipped Eoin Doyle’s free header from close range over the crossbar.

Burns had put the cross in for that chance and he did so again for the same player on 83 minutes, but Shepperd again saved brilliantly as Dundalk claimed a valuable point.

The Commentary Box: VIP treatment for Zoe Murphy warms the hearts of all supporters