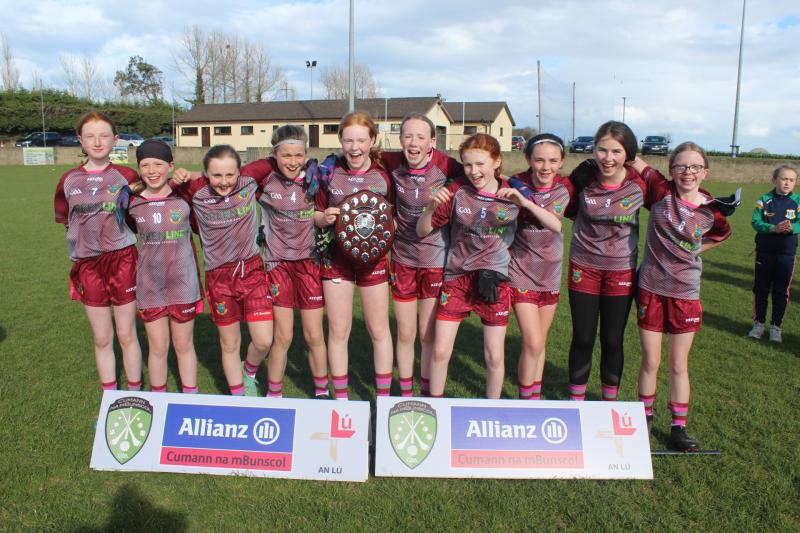 Stabannon was the venue for the eagerly awaited return to finals action for primary schools from all around County Louth as the Allianz Cumann na mBunscol Lú 7 a-side final blitzes took place.

The windy conditions over the two days made for exciting games as the phrase “a game of two halves” was often uttered at a final whistle.

On Tuesday the boys from Tullyallen, Kilcurry, Tinure and Monastery, as well as Ardee did battle. In the first round of games, Monastery took full advantage of the wind to gain an unassailable half time lead over Kilcurry that they didn’t relinquish.

Meanwhile Tullyallen’s lively full forward expertly converted five of his team’s goals to narrowly defeat Tinure. Kilcurry learned from their opening defeat and put Tullyallen to the sword in the second game, falling to a goal in the dying moments of the game to the same ace marksman.

Tinure, perhaps deflated by their opening defeat, could not muster the same energy and found it tough against a buoyant Monastery team who were on a roll. Two victories each from Tullyallen and Monastery meant their third-round encounter was a de facto final.

And it proved to be a smashing gam, quite literally. Playing with the aid of the strong wind that raged around the Parnell’s pitch, the Ardee side’s opener not only split the uprights, it took out one of the dressing room windows such was the ferocity of the shot.

They tagged on a further goal and a point before Tullyallen scored a crucial goal before the break to make for an intriguing second half. The last seven minutes of football proved to be a roller coaster with teams trading scores and the lead changing hands numerous times.

Despite the high scoring nature of the game, the nullification of Tullyallen’s top scorer proved to be the winning of the game as they thwarted his efforts on goal. And so, the Ardee captain lifted the first piece of Cumann na mBunscol silverware in County Louth since October 2019.

The following day, the girls from Dromin, Dromiskin, Lordship and Tullyallen took to the field in a bid to claim All County glory.

Despite Dromiskin’s fine tally of scores in the second half of their opener against Tullyallen and Dromin’s two goals to Rampark’s (Lordship) blank in the same period, Tullyallen and Rampark had done enough with the aid of the wind in the opening seven minutes to claim the wins.

Both winning teams faced each other in the second match in a pivotal game. While St Peter’s from Dromiskin were racking up an impressive 1-8 in defeat to Dromin, Tullyallen’s efforts against the wind in the first half paved the way for their 5-point win over Rampark to firmly place one hand on the shield heading into the final match.

In the final round of games, the side from Tullyallen showed their pedigree with a fine victory over a battling Dromin side to send their players, coaches and supporters wild with delight, especially after the heartbreak experienced by the boys 24 hours prior.

All eyes now turn to the Summer League Competitions that will commence on schools’ return after Easter. We will also see the return of the Allianz Cumann na mBunscol Quizzes in May.

The Commentary Box: VIP treatment for Zoe Murphy warms the hearts of all supporters

Leap fare for Drogheda and Dundalk town services to be reduced to €1.10
ADVERTISEMENT - CONTINUE READING BELOW