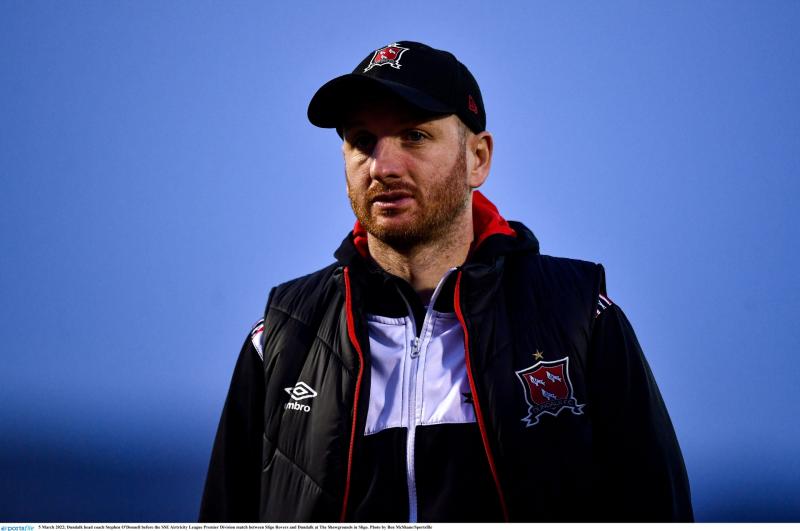 With two weeks to prepare the Showgrounds after their opening league fixture was postponed due to snow on the pitch, Dundalk would have hoped the ground staff in Sligo would have had the place sparkling with bumper crowd for a marquee fixture expected through the gates.

The fans didn’t disappoint, 3500 heading to the venue, Dundalk and Sligo brought top quality teams for the match, what could go wrong? Sadly, much to the aggrieve of head coach Stephen O’Donnell the grass was far from the pristine conditions expected at a modern ground.

It led to a poor tie for those in the ground, a draw which sees the Lilywhites stay unbeaten. However, the former midfield general wasn’t hiding his feeling towards the state of the pitch when speaking to the club’s official media team after the game last Saturday.

“Once we turned up, we knew what type of game this was” he exclaimed. “It is impossible to pass the ball on that pitch. It turned into a game of second balls, try to be solid and hope we get a moment but as regards a game of football it was a waste of time.

“The surface was rubbish, hopefully there was no neutrals there, trying to attract them to the League of Ireland, because they won’t be coming back.”

The Galwegian has been around the block, having achieved almost everything there is to do both as a player and now as a head coach.

But after the Sligo clash, the normally articulate O’Donnell was struggling to go into detail about any major factor of the game. He wasn’t hiding away from the fact they didn’t win but stressed that any sort of real footballing philosophy goes out the window when the pitch stops you playing.

“We dug in well, the game was physical, and we were physical, and we kept it tight. There are positives there in that it is two clean sheets in a row but as regards to trying to break it down as a game of football, it is one you just put away as you can’t be constructive about it.

“It was impossible to pass the ball so we may as well forget about it, but the positive thing is we gained a point from it, that is pretty much it.

“We knew we might be able to nick a goal, that’s the same for both teams but in terms of talking about a structure, platform or system you can forget about it.”

While fans will be disappointed about the lack of goals, especially given they had scored seven in their three league ties prior to the trip to the West of Ireland, the Dundalk head coach was not overly critical of his players.

While they tend to go out there with a style of football that gets supporters excited, he could understand why this wasn’t possible at the Showgrounds. His troops just couldn’t take their usual risks given the underfoot conditions.

Overall, he was just happy that after a tough few games, two of which were on the road, the Lilywhites had managed to get through the matches without picking up any major knocks ahead of another trip to the capital on Friday night.

“In games of football like that you see lads digging in and slipping, the boys are obviously a little unwilling to pass the ball because it would probably be a hindrance trying to do so.

“As I said we get a point and we move on, we are still unbeaten in four games, two clean sheets in a row and we move on to Shelbourne away on Friday.

“Another thing about this is we have come through it unscathed as regards to injuries, it was the third game in eight days and the third one always seems to be the trickiest one.

“I was at a game Friday night and a couple of lads came off with muscle injuries, so this is a real positive and it is good to keep the momentum going with regards to being unbeaten. But as I’ve said we may as well forget about this match as far as the football is concerned.”

The schedule doesn’t get any easier for the Lilywhites, who have two huge games in the space of four days. First up is a trip to Tolka Park to face Damien Duff’s Shelbourne on Friday night (Kick Off 7:45PM).

They will be desperate for points having lost out to Derry City at home last Friday and only drawing 0-0 away to UCD at the Belfield Bowl.

Next up is a huge tie in Oriel Park this Monday evening when the league holders Shamrock Rovers make the trip up to Louth (Kick off 7:45).

Stephen Bradley’s troops have yet to hit peak form, having lost two of their four league games this season and have a Dublin Derby versus Bohemians to contend with beforehand on Friday night.

Both ties will be available to stream via LOITV, each at a cost €7 which is a €2 increase on the price of streams in 2021.