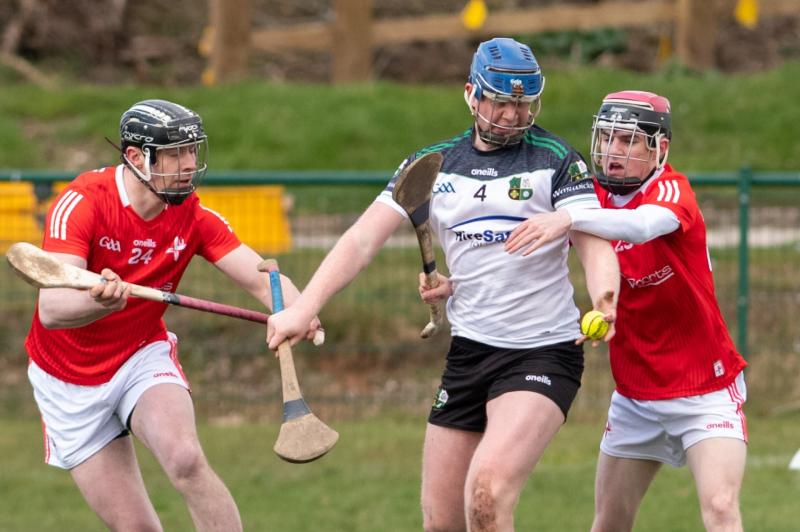 The Louth hurlers were denied a first victory in the National League as a last gasp goal from John Collins saw the points shared in Birmingham.

The Boys in Red had at one stage trailed by 10 points, with the home side, more used to the conditions, keen to bag the win to boost their hopes of staying in the division for another year.

They managed to claw back the deficit, outscoring the hosts significantly in the second half, however despite taking a three point lead deep into injury time, a lovely strike from the Nottingham based Collins left his side on levels terms come the final whistle.

With Louth having the better scoring difference of the duo, the draw should be enough to keep them in 3A for another year if avoiding a disastrous defeat in their final game in two weeks’ time, while the result does keep Warwickshire’s slim hopes of avoiding the drop to 3B alive.

Pairc na hEireann is notorious for its inability to shield any team playing there from the elements. Perched on the edge of Birmingham's International Airport, the exposed location allows the low spring sun to get into your eyes and a light breeze to feel more like a biting gale.

With temperatures struggling to get above 4 degrees, those light winds were going to be stinging. For guests such as Louth, their tactics would have to adapt to the conditions as well as the physical style that the Warwickshire Hurlers were going to provide.

With the game underway, it would be fair to say that Louth got off to a calamitous start. Losing the battle around the middle of the field, The Wee County struggled to win the ball in play and failed to finish when they did have possession.

Warwickshire, utilising a strong physical element to their attack, were allowed to play their own game and set the pace they were comfortable with.

Breaking down Louth's defence and creating space, the home side was flowing well and they were rewarded with two goals and nine points.  The two first half goals coming courtesy of John Collins and Kelvin McGee.

It was a first half Paul McCormack’s troops would want to forget, as they struggled to find their game and they would need to regroup significantly for the second half and take the game to Warwickshire, whom they trailed at the break by 2-9 to 0-05.

With a 10-point lead, Warwickshire started the second half by winning the ball from the throw-in and maintaining their dominance of the tie.

With the wind now on their backs and looking away from the airport end of the ground, Louth started to match the hosts in the physicality stakes, forcing them to make numerous errors.

Matching Warwickshire's strength in midfield allowed Louth to maintain possession for longer periods of time and feed the ball forward. The change in their approach allowed them to chip away at the hosts 10-point lead.

Needing a win after a series of tough losses, Louth really threw the kitchen sink at the men in Black and white, pressing them hard, keeping the sliotar better and for longer periods of possession, while most importantly creating chance after chance as they looked to close the gap.

Denting the flow in Warwickshire's game allowed the visitors to play their own game, building confidence and turning this momentum swing into points on the board.

Paul Matthews' speed and strength on the wing allowed him to cut across the goal mouth and turn quickly to score Louth's first goal.

The goal certainly was a turning point in the game and winded the hosts.  Warwickshire's dominance in the game had all but disappeared and it looked like, for the first time, this could be Louth's game.

Into the final quarter of the game and Louth had eaten away at Warwickshire's ten-point lead and led for the first time, all while looking like they had more in the tank then their hosts. Going into the final just few minutes of action, they had built up had a three-point lead.

Sadly, another goal from Warwickshire's John Collins dented any hopes of a first win on the road, as again the sides were level. Louth had taken the foot off the accelerator and looked like they would settle for a draw. With a final push, they were finally beaten by the whistle with the game ending in a highly entertaining draw, 3:13 to 1:19.

With one round of fixtures to go, both sides fill the bottom two slots in the league table. However Louth should be safe, their saving grace, despite having yet to pick up a win, being their decent scoring difference in comparison to Warwickshire (-21 versus -45).

Both teams have big challenges awaiting them in two weeks, Louth making the trip North to play promotion chasing Tyrone, while Armagh make the trip across the water to Birmingham.