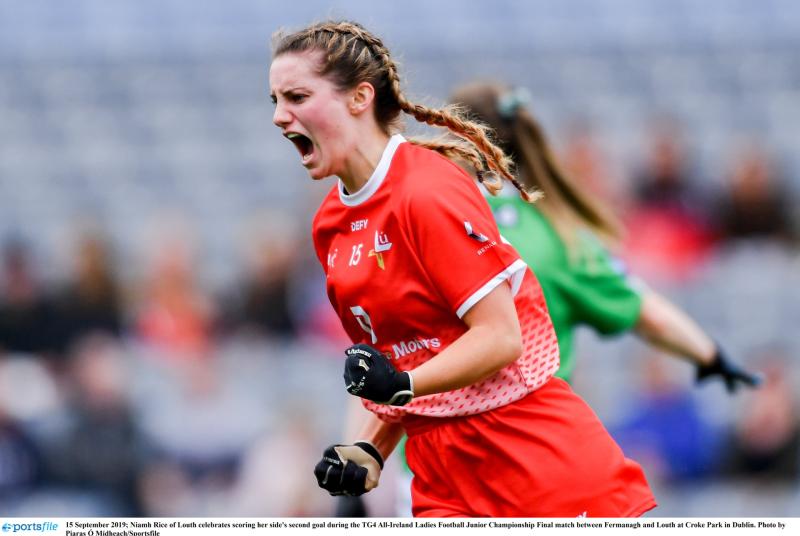 Niamh Rice is a player who at this stage needs little introduction to those in the know about Ladies Football.

The Cooley native has become a mainstay in Wayne Freeman’s Senior Side and has won multiple honours for both club and county.

For the young forward, her interest in the sport goes back to her childhood, a time where it was hard to find her without a football.

“It was always a big thing in my house” she recalled. “To be honest my first memory of playing football is just standing in my back garden with my dad, kicking it up high and just practicing catching it.

“I suppose then it amounted to me being the only girl down in Cooley, in there with all the boys but sure that didn’t bother me. I was just happy to be playing football and that’s all that really matters.”

She has gone from strength on the football scene, walking up the steps of Croke Park as an All-Ireland Junior Champion with the Wee County back in 2019 as well as also winning the big prize locally with Cooley Kickhams in 2018. She finds it hard to decide which means the most.

“2018 and 2019, they were just amazing experiences. From when I was a child, I had always dreamed of Croke Park and walking behind the band in a big county championship final. So those moments are by far my highlights to date.”

While best known as lethal attacker, sport is not the only industry she has exceled in. Rice is also a phenomenal singer and now often performs alongside her sister in pubs throughout the county.

She always loved singing, but it was a gift that she only really discovered through success in sport. With the county final win came the chance to raise her voice and she has not stopped embracing this other talent ever since.

“We sing locally in the pubs, it started as a bit of craic when we won the title with Cooley and it kind of went from there with people asking us why we don’t do this more often. So we bought a bit of gear and haven’t looked back since.”

A singing sensation, a star on the football pitch, is there anything else to Niamh Rice’s bow as we celebrate International Women’s Day? How about holding her own in the world of farming.

From a rural background, Rice has always had an interest in farming and is currently studying Agriculture at DKIT. Farming is seen as a real male world, but in her eyes girls are just as capable of pulling calves and feeding sheep early in the morning as anyone else.

“There’s no point in hiding the fact it is a male dominated profession, but at least half of my class in college is made up of girls and that is only growing every year with more females applying for it.

“So, we are getting there and there is no reason why we won’t be running the show in the next few years.”

Looking to the future, when asked what advice she would give to any young girl hoping to make a name for herself, in whatever discipline it might be, Niamh’s words were simple in principle but ultimately is the reason why so few of us make it big. Just keep at it.

“You just have to stick with it, that is the simple truth” she exclaimed. “We have all gone through bad periods of just feeling like you can’t get into something.

“Look at myself, I lost fitness there for a while and you get so unmotivated, but you just have to pick yourself up, no matter what comes in your way you just have to burst through it and keep going, as it is the only way you get anything in life. Winners get everything, losers get nothing.”