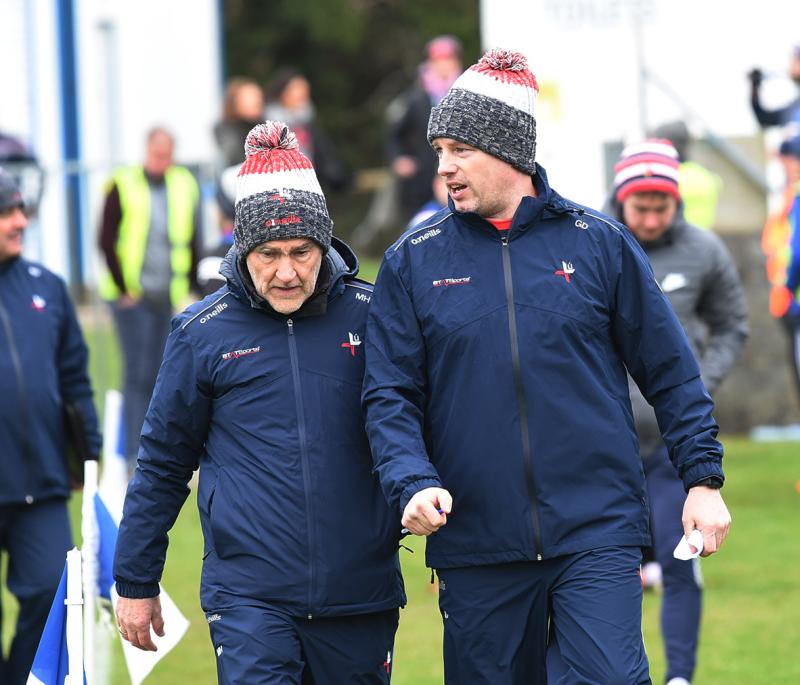 Mickey Harte and Gavin Devlin on the sideline during Louth's National League tie with Westmeath in Ardee. (Pic: Arthur Kinahan)

From the word go in early 2022 as a small crowd of devout soldiers made the trip to Longford to watch Louth in the O’Byrne Cup, there has been one word that manager Mickey Harte has been stressing about. Character. Something they have been clearly showing in recent weeks.

After shocking a highly fancied Limerick in the rain and hail on the road, the Wee County had home comforts last Sunday as they hosted Westmeath in Ardee. Another highly rated outfit at the top of the standings who were expected to come to Pairc Mhuire and pick up the two points.

Showing the belief and character instilled by the Tyrone native in abundance, the Wee County fought through a couple of setbacks to deservedly put the Lake County to the sword. Harte was an extremely happy man as he spoke to the Democrat following the win.

“We had to battle all the way through this game, it was probably a fortuitous goal they got, perhaps ours was as well but I don’t think they were going for a goal while Conor Grimes was in a good place to punch ours home” recalled Harte when speaking about the ties two vital goals.

“That early goal could have set us back big time, but the boys fought back well in the first half to get over that and we knew at half time there would be a battle. The wind was favouring Westmeath in the second half, and they were kicking into the scoring end here in Ardee.

“They had a lot going for them, and when we went a few down at the start of the second half it looked like we were in big trouble, but I just think that is a great credit to the boys as over the last few games they have shown great belief and real character to fight these battles.”

For a second week running it was impossible not bring up the fine game of Louth captain Sam Mulroy, who is showing a sublime talent in his role as a free taker this year. Against the Midlanders the Naomh Mairtin clubman bagged 11 points from a plethora of angles.

Harte described him as having an “X-Factor” not seen in many players, who would be a welcome addition to any county panel. But he stated his real worth was in the impact his place-kicking efficiency gives to the men around him.

“Some of those kicks, those frees kicked under pressure, that is a major difference to a team when you have somebody capable of that” he explained. “We work so hard to create those scores and if you have someone that can’t convert them, then all your work was somewhat in vain.

“When that work is rewarded with scoring like that, then players know it is worth it to work that hard because if we get into the scoring zone at all, Sam will knock it over for us. He is a real gem to have in this team.”

After such a poor start, at least from a bare results stand point, where the Men in Red failed to win any of their three O’Byrne Cup matches as well as starting the National League off with a loss to Laois, Louth seemed to have turned a corner now.

The wily manager used the O’Byrne Cup in particular as a way of seeing what he had at his disposal, having used around 30-40 players, often experimenting with new talent or players in new positions.

All the while his marquee players were kept in reserve, mainly due to nursing injuries. As they have slowly got back into the team, results have started to turn. He expects those big names to have an even greater effect the more time they get back on the field.

“We had been missing a lot of players through injury, a lot of players that are on the team now haven’t had a long run of training. While some boys are coming in training for two or three months, for others it is only five or six weeks.

“Those games and that extra bit of training is bringing them on which I think is to be expected. Those key players, the men who are going to be starters, the more game time they get the greater influence they will have on the outcome.”

Getting back to where we started, character, Harte is seeing more and more as the year has gone by, with their work rate and fight maybe only now being recognized due to an upturn in results.

He is hopeful that his troops will now see the benefits to their dedication, while noting that the support they will get from the terraces will show that their sacrifices are being appreciated, even if their style of play doesn’t always get the results it deserves.

“In the league they have had chances to show a bit of mettle, even in the games they have lost” noted Harte. “To me they showed it in the second half against Laois as they could have capitulated that day and they didn’t.

“We showed it against Longford as well. Having been in a good position at half time we soon found ourselves in a bad position going into added time and yet still eked out a point to draw the game. So I think there is some fighting spirit here which we need to build on.

“We need to believe that it is worth doing. You won’t always get the results that you want but it will leave people very happy to watch you, as they know you are putting a huge effort in.”