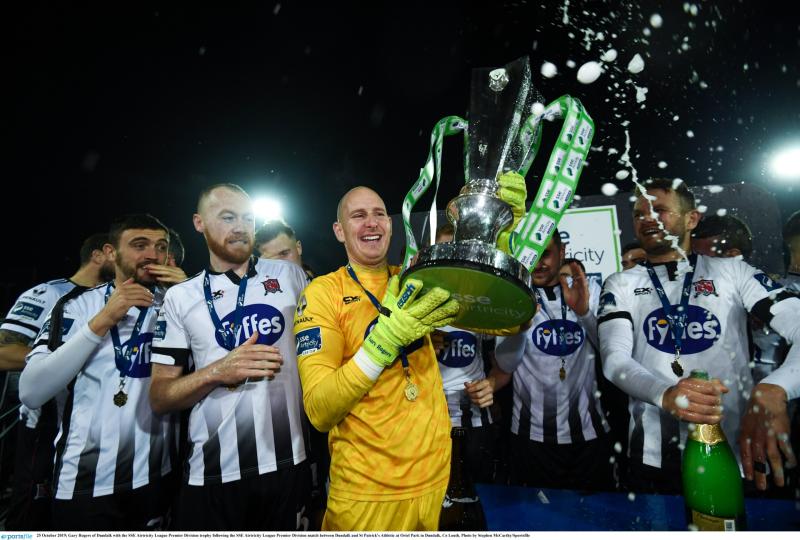 Gary Rogers with the SSE Airtricity league trophy in 2019, his fourth league triumph with the Lilywhites. (Pic: Sportsfile)

During the week I caught up with Gary Rogers, the most successful goalkeeper in the history of Dundalk football club. Gary won four League medals and three FAI Cup medals with the club.

Previously he won a cup medal with Drogheda United and another one with Sligo Rovers, along with a league winning medal with the Showgrounds side.

Gary was approached by Stephen Kenny in December 2014 and asked to join up with the Oriel Park side. Dundalk had already won the league title in 2014.

Over the next six years Gary would win four league medals and three cup medals in the most successful period the club ever had. He saw his Dundalk side do two cup and League doubles in 2015 and 2018.

He was also on the teams that qualified for the group stages of the Europa League in 2016 and 2020. The famous team in 2016 reached the last qualifying round of the champions league, one step away from the group stages. Dundalk were very unlucky to be denied by Legia Warsaw.

They dropped into the Europa League group stages. Gary was part of the Pat’s and Sligo Rovers sides that played in Europe also. Rogers says it was a no brainer for him to sign for Dundalk when Stephen Kenny came calling.

He felt Dundalk were flying under Stephen and going places while mentioning how himself and his wife were just after having their first baby. They wanted to move home and build a house. Thus, a move to Dundalk was ideal on all fronts.

Gary said it was always a good point of debate who was the best Dundalk team he ever played for. The Meath native believes the 2015 team that did the league and cup double may have been the best team. But he said it was hard to know and that everyone had an opinion on the topic.

He felt the 2015 team was an excellent team. Gary said you could glorify any player equally from that year and mentioned Daryl Horgan and Richie Towell in particular. The side also had Ronan Finn who was a top-class player.

He also talked about Sean Gannon, Brian Gartland and Andy Boyle who were part of the other great teams as well along with Dane Massey. He recalled how Daryl Horgan was flying at the time, as was Richie Towell, who got 27 goals that season.

Gary said that 2016 saw them going on their best run in Europe. The club beat AZ Alkmaar in the group stages of the Europa League and they also had a draw.

He recalled 2016 as a great year given that Dundalk came so close to getting through to the Champions League, where they would have been playing with the big guns in world football such as Real Madrid and Barcelona.

Gary said it was terrific to win the league and cup double in 2015 and 2018. He says it was great to do the doubles and that it was achievements like these that set great teams apart from the really good teams.

Gary believes Dundalk took great encouragement in 2018, wining the double after being written off in 2017 when great rivals Cork City won the cup and league. Gary says the 2018 team showed people what they were about by winning the double themselves.

In 2019 Dundalk came very close to doing the treble when they went into the cup final under new boss Vinny Perth. Dundalk had won the EA Sports Cup and retained the league. They were beaten by the butt of a post in a penalty shootout against Shamrock Rovers in the final.

In 2020 Dundalk won the cup beating Shamrock Rovers in the final. This was the year Covid decimated the season. Vinny Perth and John Gill departed during the season.

Dundalk were managed by Filippo Giovagnoli and got to the Group stages of the Europa League and won the cup.

Gary played his last competitive game against Arsenal in the Europa League group stages. He played his last game domestically in the cup final against Shamrock Rovers and saw Dundalk collect the cup.

Gary says despite the achievements in 2020, it was a disappointing year. Their League performance were particularly disappointing as they finished 3rd in the league, Dundalk’s lowest position since 2012.

Gary says that the team did let themselves down by results in the league that season and agreed with me that 2020 was a very strange season. The former Dundalk keeper says it was a very challenging year for many different reasons.

Gary said things were not great both on and off the pitch and that the environment just was not right at the club. He thought the team let themselves down in terms of their league performances.

He said to win the cup and qualify for the group stages of the Europa League shows the quality there was in the team and that it emphasizes that the environment was not right at the club. He says unless everything is right, it’s hard to be successful.

He says the team could have done more on the pitch but that they had lost too many points in the league campaign. Gary recalled how Dundalk just about scraped into Europe for the following season.

Success he says was about winning the league titles and Dundalk just did not do that in 2020. Gary also said that Dundalk’s success in Europe in 2020 masked what was probably going on at the club at the time.

Gary exclaimed how it was difficult in one sense to retire from football and felt that possibly he had another year left in the body. He said that he just felt that it was the right time to go as he was not enjoying his football at Dundalk.

He noted how he would enjoy it even less the following season if he was being honest about it and just thought it was the right time to go. He had no regrets at all. He says the key to him walking away from the game was winning the FAI Cup. If the team had not won the cup, he would have found it that bit more difficult to go.

I found Gary, one of football’s gentlemen, to have a lot of interesting things to say. I will come back to the other issues he raised in the rest of the interview in the coming weeks. When he did leave playing football, he kept up his interest by becoming a scout for a Portuguese agency.

So our Gary did not hang around for long before he got a job in football working as a scout for a Portuguese football agency. He is enjoying his time away from playing football, but he is still heavily involved in the game off the pitch. More about Gary soon.