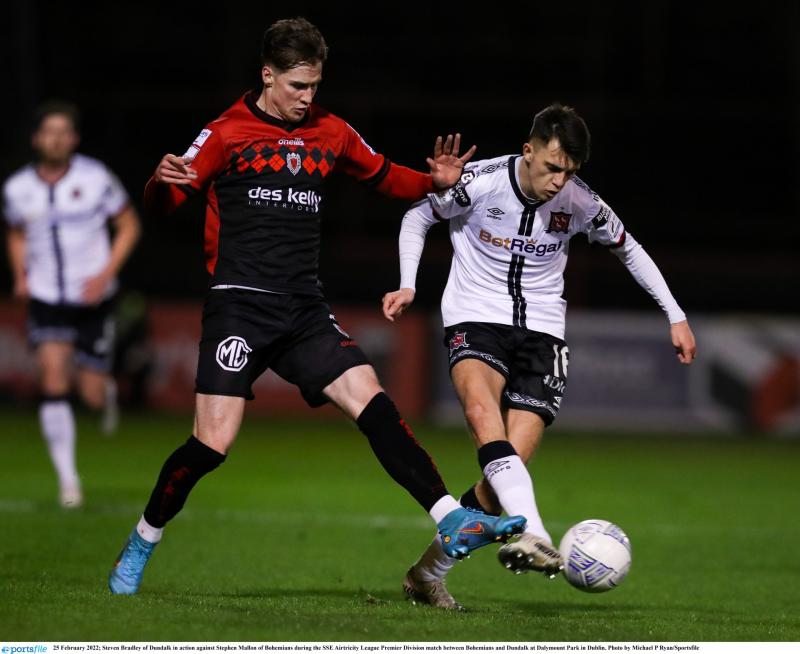 Dundalk FC drew 2-2 in the SSE Airtricity League for the second week running on Friday night as they fought back twice against Bohemians to earn a point at Dalymount Park.

Former Dundalk midfielder Jordan Flores had put The Gypsies in front, but that goal was cancelled out by Patrick Hoban a matter of seconds later at the opposite end.

Promise Omochere had put Bohs back ahead shortly before half-time, but Steven Bradley’s second goal in as many games ensured the sides would share the points.

Dundalk made two changes from their opening-night draw against Derry City at Oriel Park, with Daniel Kelly and Greg Sloggett coming in for Joe Adams and Paul Doyle, who both dropped to the bench – while ex-Lilywhite Flores was named in the Bohs line-up.

Indeed, it was Flores to whom the game’s first chance fell to, but the Englishman’s shot was fizzed wide of Nathan Shepperd’s post, and not long after that at the other end, Kelly had a goal-bound attempt crucially blocked out by Bohs defender James Finnerty.

Bohs floated a number of dangerous corners into the box in the first half, and Omochere came close, but couldn’t direct his header on target from Tyreke Wilson’s delivery.

However, it didn’t come as too much of a surprise when Bohs took the lead on 28 minutes through Flores, who guided home from an inswinging corner by Ali Coote.

Dundalk responded immediately at the other end, though, when their record league goalscorer, Hoban, nodded home from a Dan Williams corner in front of the away end.

The Lilywhites created several chances to take the lead after that equaliser, with Sloggett firing a shot from distance which had to be gathered by Bohs goalkeeper James Talbot.

Stephen O’Donnell’s side really should have made it 2-1 when Bradley played Kelly through on goal, but the ex-Bohs man was foiled by yet another save from Talbot.

Hoban’s shot stung Talbot’s hands, while Wilson was accused by the Dundalk players of handling in the box, but not referee Paul McLaughlin, who waved away the appeals.

Bohs retook the lead a minute before the half-time break when McLaughlin played a good advantage – allowing Kris Twardek to cross for Omochere and he turned home.

Dawson Devoy flashed a dangerous shot across goal four minutes after the restart, as Keith Long’s side looked to add more on what was their first game of the 2022 season.

In what was an end-to-end encounter, Dundalk equalised once again on 56 minutes when Kelly’s pinpoint cross was directed home via the post by the head of Bradley – a loanee from Hibernian who has now scored two goals in two appearances for the club.

David McMillan almost put Dundalk in front, but was denied by Talbot minutes before the Bohs ‘keeper was on hand again to deny Bradley, who had tried his luck with a shot.

Back at his old stomping ground, Keith Ward saw a free-kick effort go not far off target, while Twardek curled an attempt wide for Bohs with just four minutes left on the clock.