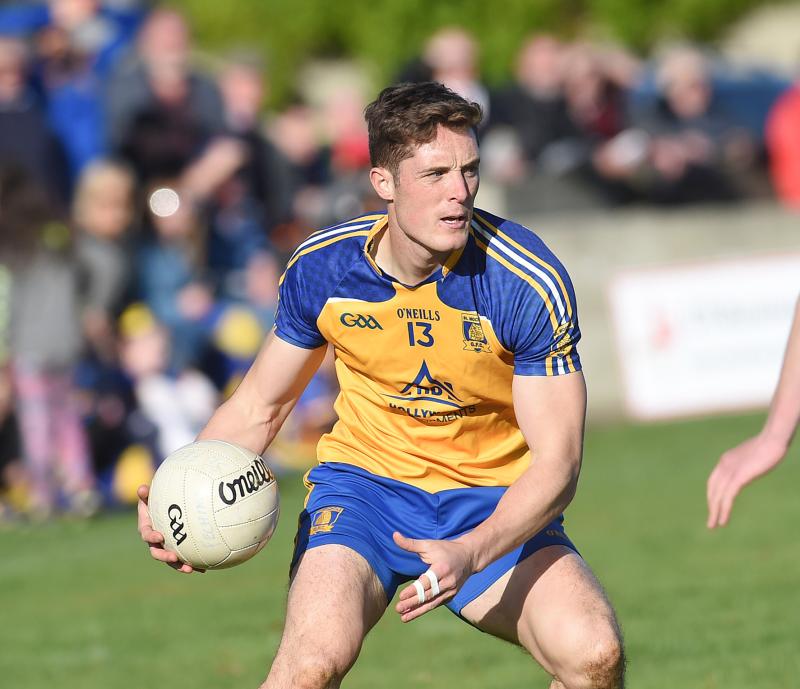 Goals from Jamie Farrell and Liam O’Flaherty helped St Mochtas to an opening day win over St Kevins in Group A of the Paddy Sheelan Cup.

The Louth Village side looked to have the edge from the opening stages and with Declan Byrne in fine from in front of the posts once again, they quickly took command. A goal from Jamie Farrell helped his side lead by 1-12 to 2-2 at half time.

The Philipstown side battled throughout but were unable to match the scoring power of their opponents, although they did manage to find the net three times through Tom Matthews, Lee Crosbie and Brian Callaghan.

Despite this, the Mochtas remained on top and in the end added a second goal through Liam O’Flaherty.

A second half penalty from county panelist Cathal Fleming was enough for home side Mattock Rangers to shake off a determined Dundalk Gaels side in Collon on Sunday.

The visitors led 0-7 to 0-5 in the opening half with the aid of the strong breeze and the excellent mark taking from full forward Tomas Cavanagh.

Rangers were wasteful in the opening half and were more accurate in the second with evergreen Adrian Reid finding the target on numerous occasions and a late goal from substitute Ben McKenna.

Mark Byrne opened with a point for Roche only for Ewan McEnteggart to reply to level. Four scores from Barry O'Hare with one in the middle for Mark Byrne put Roche six up but just before the half ended Cathal Bellew goaled and O'Hare hit his fifth to make it 0-7 to 1-1.

Roche hit their first point after the break and followed with a goal from Eugene Murray while Shaun McElroy pointed for Kilkerley. Mark Byrne, Sean Dawe and O'Hare closed out Roche’s scoring.

Kilkerley then hit a purple patch 0-2 from Conal McEnaney and goals from Cathal Bellew and Fintan Brady leaving it 1-12 to 3-4. However, they were unable to complete the comeback and Roche held out for the win.

A penalty the dying minutes of the second half from Emmet Carolan gave the home side the edge to take the points in the opening round in Group D.

Played in blustery winter conditions it took both teams a while to get to grips with the wind. Following two wides from Fechins, the Blues got their first score of the game with a point from a free in the 10th minute followed by another from play two minutes later.

In a great run from the centre of the field, half back Neal Hodgins found the back of the net to put the Fechins in front and that was followed by a superb point from play courtesy of Joe Corrigan.

The teams exchange three more points, Fechins again from boot of Joe Corrigan and two from frees taken by Ryan Walsh to see St Fechins lead by 1-4 to 0-7 at the break.

The home side came out in the second half and levelled the game after five minutes. A point from Ryan Walsh was cancelled out with a free from the Blues in 17th minute. Fechins went ahead after a pointed free from the No 1 Niall McDonnell in the 24th minute.

Unfortunately for the visitors the Blues found the back of the net when a penalty was awarded for a foul in the square. A consolation point from Colm O’Neill was all Fechins could manage before the final whistle.

This proved to be a game of two halves as Cooley Kickhams picked up the first win of the year in Fr McEvoy Park at the expense of St Joseph’s.

Cooley with two McDaids in the full back line kept the Joes to one point in the first half and at the other end, Peter Shields found the net to give Kickhams a healthy 1-8 to 0-1 interval lead.

Joes came roaring back into the contest in the second half but despite Conall Smyth and Evan McEntaggart’s best efforts the home side would not be denied.

The Knockbridge men led from start to finish with Kevin Hearty bagging 1-3 to give his side a commanding lead at half time, 1-08 to 0-2. The only scores for the Togher men coming from a Ciaran Markey freekick and Jack Butterly.

It got worse in the second half for the Barrs when they were reduced to fourteen men early on. The Knockbridge men took advantage of this and moved up a gear, scoring an unanswered 1-10 to run out comfortable winners by a twenty-two points margin.

Geraldines raced into the new season with a bang with a powerful start that could not be caught by Dundalk Young Irelands at DKIT.

Gers corner forward Ben Gartlan had two goals in the net before the Irelanders registered a score. The game was almost sealed when Shane O’Hanlon found the net to make 3-4 to 0-3 at half time.

Liam McStravick did come off the bench to find the net to provide the scoreline with some gloss in the finish for the well beaten Irelanders.

O Raghallaighs turned in a strong second half display as they eased past Clan na Gael at the Gaelic Grounds on Sunday afternoon.

The Group H encounter produced a close first half with the O Raghallaighs leading by just 1-4 to 1-3, as a goal from Paul Martin kept the Clans in touch.

However, there was no stopping the hosts in the second half as they fired in three goals to complete the win.