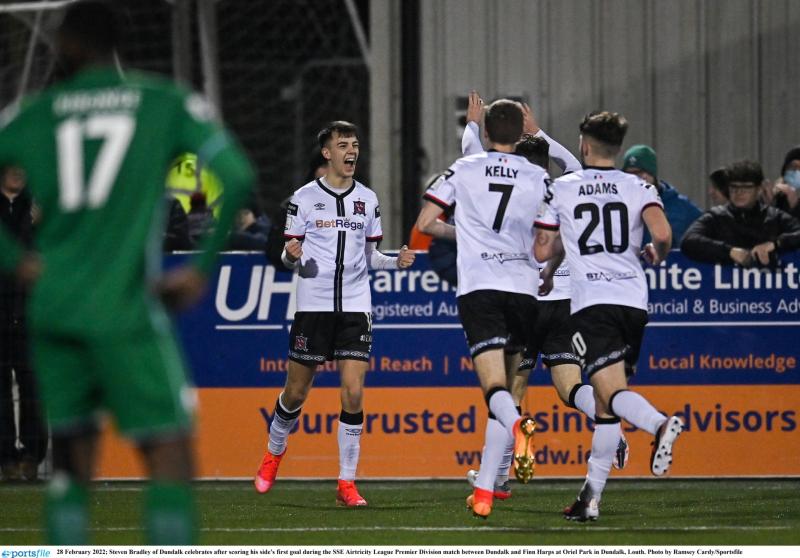 Having played second fiddle for the best part of 40 minutes, Dundalk took the lead a minute before the break through Steven Bradley – and Harps simply never recovered.

Sam Bone added a second one minute into the second period before man-of-the-match Bradley put the icing on the cake for Dundalk with a superb finish on 66 minutes.

Harps dominated the opening half and they should have taken the lead after 12 minutes when a mix-up between Lewis Macari and Andy Boyle afforded possession to Ethan Boyle, who played Filip Mihaljevic through on goal and the Croatian rounded Nathan Shepperd, but was somehow denied by Macari’s superb last-ditch block on the line.

The resulting corner from Ryan Connolly was headed over the top by Conor Tourish.

Mihaljevic was causing problems for Dundalk, and his cross from the right was directed wide by the head of Barry McNamee, while not long after that, Ethan Boyle’s long throw-in wasn’t dealt with by The Lilywhites before Connolly’s volley was saved by Shepperd.

Harps were claiming the ball had crossed the line when Connolly’s corner was battered away by Shepperd, but television replays proved the officials to have made the right call.

Ollie Horgan’s side again should have took the lead on 31 minutes when makeshift left-back Robbie Benson’s loose pass put Mihaljevic through on goal and he nutmegged Andy Boyle before crashing an attempt off the frame of the woodwork with Shepperd beaten.

The Donegal side were made to rue all those missed opportunities on 44 minutes as Dundalk took a lead they hardly deserved when Bradley – out on the right – left Mark Timlin and Jose Carrillo for dead before curling a beautiful finish into the far corner.

Dundalk made it 2-0 a minute into the second half when Bradley sprayed a wonderful pass across to right-back Bone, who drilled home with his left foot after teasing Carrillo.

Patrick Hoban showed great strength to outmuscle Carrillo before laying it off with his head for Bradley, whose volley from outside the box was well saved by Mark McGinley.

O’Donnell’s side made it 3-0 on 66 minutes, and it was Bradley again who finished beautifully with his left foot after the ball broke to him on the edge of the area.