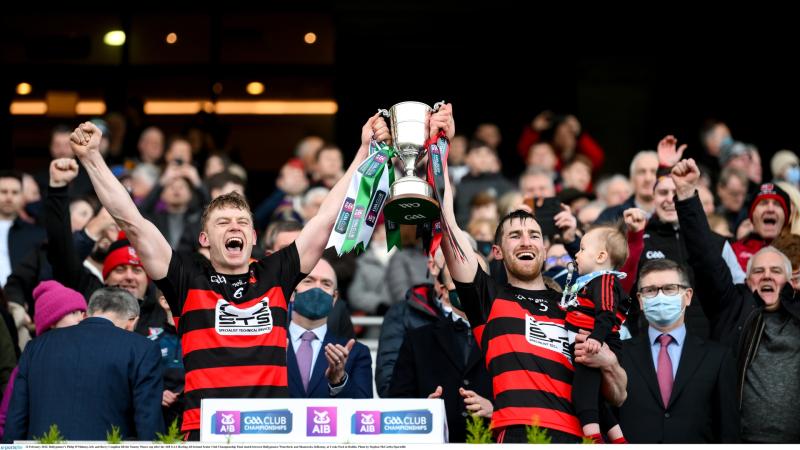 It was no real surprise to see that nothing had come through from Jim McCourt to tell me Ballyugunner won last year’s Waterford senior hurling championship.

In previous years Jim would have been on like a shot if the cup had made its way to that part of the Deise, and while he wouldn’t go into detail about the game, he’d remind me – as if I needed reminding – that his uncle, James McGinn, a Dundalk man born in Seatown who went to teach in Waterford early in his career, was the Ballyygunner club founder, in 1954.

Many were the stories carried on this page before about Ballygunner and James; and though Jim is a dyed-in-the-wool soccer man, my guess is that though there are very few more than him going up to Oriel as long, he’d have taken pride in his uncle’s achievement.

Same with his brothers, Nicky – another who knows his way up the Carrick Road without any help – and John, a Christian Brother who served the people of Zambia for over three decades and is now retired in Dublin.

Maybe it had all become too monotonous for Jim - not posting a missive this way, about Ballygunner taking the title. Their win in 2021 was their eighth-in-a-row and 20th overall.

And though they have still some way to go to get to the head of the leaderboard, knocking the famous Mount Sion into second, their achievement is more than noteworthy when you consider their name wasn’t etched on the trophy for the first time until 1966.

Can we soon expect something to appear on the screen having winged its way from Avondale Park? There’d certainly be a Ballygunner story to tell, and with justified McCourt pride.

Not satisfied to be the best in Waterford – maybe even getting fed up with it – the Gunners went for broke this year. It wouldn’t be good enough to add to their three Munster titles, the really big one was the All-Ireland title. And how winning it would be the perfect tribute to their late founder.

Ballygunner set themselves a difficult task in their bid to break their duck. Opposite in the final at Croke Park the Sunday before last were the hat-trick-chasing Ballyhale Shamrocks, with whom current Galway boss, Henry Shefflin, made his bow as a team manager.

It was a thriller, much better than the football final which followed. The clock had almost stopped when Ballygunner grabbed the winning goal.

It would come as a surprise – no, a shock – if James McGinn’s name didn’t get a mention when the Tommy Moore Cup came to its resting place in the ‘Gunner that evening.

Read this, just part of what was written in the Ballygunner club notes when James died in 1995: “Mr McGinn was no ordinary teacher. His day just didn’t start at 9.30 and finish at 3 o’clock.

“Five days a week, almost every boy in the school would happily make his way to the Castle Field and for the next two hours would learn the skills of hurling from a man who gave his own time freely to help us develop into competent hurlers, and in his own subtle way helped us develop character and honesty….

“Ballygunner has produced many brilliant hurlers, but all would admit that without Mr McGinn it is possible they might never have been lucky enough to even played the game.”

James McGinn transferred to Waterford with very limited knowledge of hurling – like his nephews coming after him, he had a leaning towards soccer and was a fan of Oriel Park.

But he soon adapted to the popular local game, and while he may have nipped over to Kilcohan Park on Sundays to see the Fitzgeralds, the Hales and goalkeeper Tommy Taylor, playing in the League of Ireland, sometimes coming up against James’s townsfolk, the two Joes, Ralph and Martin, Ken Finn and others, the hurling helped him hone his skills as a life coach as much as a games mentor.

To finish, where do you think the Ballygunner colours, red-and-black, come from? A clue: It was their founding member who thought them up. Yes, it’s the red of Louth and the black of Dundalk, and what’s more, the club crest is the McGinn clan’s.

Man due in court later today over 2018 murder