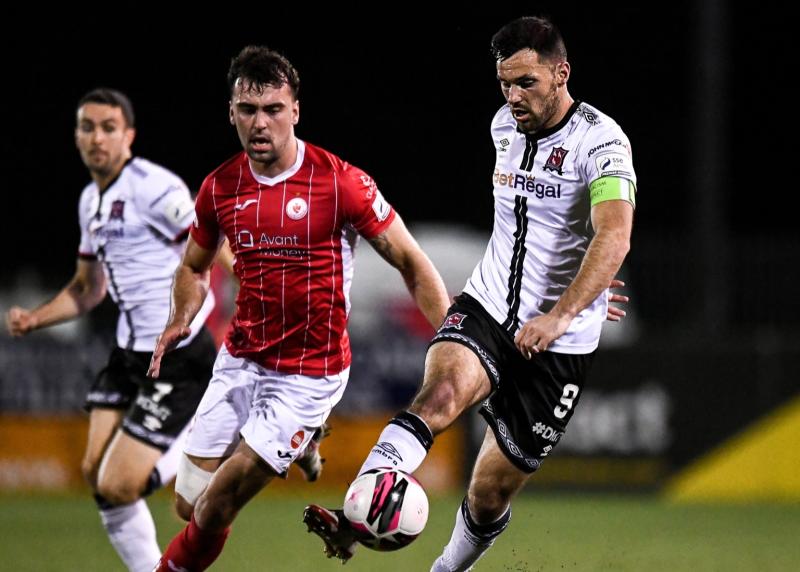 After getting his first competitive win as Dundalk FC head coach earlier this week against Finn Harps, Stephen O'Donnell's troops head west this weekend to take on Sligo Rovers.

Ahead of this fixture, the Democrat looks back on the meetings between the two sides in 2021 to get perspective on how closely they were matched last year.

Dundalk FC opened their 2021 SSE Airtricity League campaign with a 1-1 draw against Sligo Rovers in what was an entertaining match at The Showgrounds .

Slack defending from both teams in the first half allowed Patrick McEleney to bag his first league goal since 2019 before Sligo’s returning hero Romeo Parkes headed in an equaliser.

Sligo had a goal ruled out in the closing stages when Kenny’s shot was saved by Abibi, with the rebound falling to Cawley, who squared for Mark Byrne to finish but the flag was raised.

That offside decision looked to be marginal at best and Dundalk had another lucky escape in stoppage-time when Abibi punched Cawley’s effort away before saving again from Bolger.

Dundalk FC failed to capitalise on their man advantage as they suffered a 1-0 home defeat to Sligo Rovers in what was another disappointing display from the underachieving Louth side.

The outstanding Jordan Gibson’s goal not long before the half-time break was all that separated the sides, as Dundalk struggled to create anything against the ten men of Sligo.

Unbeaten in four coming into this fixture, Dundalk had the game’s first chance early on when Junior Ogedi-Uzokwe had his close-range effort smothered by Sligo goalkeeper Ed McGinty.

At the other end, Greg Bolger drilled a shot harmlessly wide, before Walter Figueira crashed an effort off the underside of the crossbar in what was a real let-off for Jim Magilton’s side.

Liam Buckley’s side took a deserved lead on 39 minutes when Gibson brilliantly turned Andy Boyle before rifling a shot from 25 yards beyond the grasp of the despairing Cherrie.

Dundalk were handed a lifeline early in the second half after Sligo were reduced to ten players when Garry Buckley picked up a second yellow card for a high foot on Junior.

The Lilywhites sought to break the Sligo resolve after that, with substitute Daniel Kelly firing over after being played in by Murray, who himself ballooned miles off target thereafter.

Wilfried Zahibo’s header was brilliantly saved by McGinty late on as Dundalk succumbed to their fourth league defeat of the season in what was another bitterly disappointing night.

Dundalk FC’s barren run of form continued in the SSE Airtricity League continued after they were beaten 2-1 by a resurgent Sligo Rovers at The Showgrounds. This was their fifth defeat in six matches and left them perilously close to the bottom of the table.

Things were looking good when Patrick Hoban put them in front after 18 minutes. However, only two minutes later, Andre Wright levelled for Sligo, while a Lewis Banks header on 52 minutes compounded another miserable night for Vinny Perth’s side.

In what was a rainy night at The Showgrounds, Adam McDonnell glided a free-kick attempt just over the top, before Sam Stanton dragged a shot well wide at the other end.

Dundalk should have taken the lead on seven minutes when after receiving a Michael Duffy pass, Greg Sloggett blazed over the top of Ed McGinty’s crossbar from close range.

After being set up by Duffy’s incisive pass, Hoban took perhaps one too many touches before his final attempt was saved by McGinty, but he wasn’t to be denied a minute later.

A neat exchange between Cameron Dummigan and Duffy on the left saw the latter’s cross not properly cleared by John Mahon or McDonnell, with the ball falling into the path of Will Patching, whose volley was diverted into the net by the heel of Hoban.

However, in typical Dundalk fashion this season, Sligo found an equaliser two minutes after that goal when David Cawley’s innocuous cross from the right evaded the entire Dundalk backline before being met by Wright at the back post who had an easy tap-in.

Sligo took the lead when Greg Bolger’s set-piece delivery was met by the head of Banks, who somehow forced the much-maligned Dundalk keeper Alessio Abibi to fumble into his own net.

Abibi almost cost Dundalk again when he parried McDonnell’s inswinging free-kick from the right, but luckily for The Lilywhites, Raivis Jurkovskis was able to clear the danger.

The most worrying aspect of this particular defeat for Dundalk was the fact they never looked likely to get back into the contest, with not a single chance created in the second half.

Dundalk FC have returned to winning ways in the SSE Airtricity League after beating Sligo Rovers 4-1 at Oriel Park.

After what was an uneventful opening period, Dundalk put themselves in front on 12 minutes when Sami Ben Amar’s left-field cross somehow found its way to Sean Murray, who got ahead of John Mahon before finding the net with a delightful side-foot finish.

However, that lead lasted just two minutes when Niall Morahan’s ball from midfield was excellently controlled by 18-year-old wonderkid Johnny Kenny, who impressively held off the challenge of Raivis Jurkovskis before slotting beyond the grasp of Peter Cherrie.

Dundalk restored their advantage on 20 minutes when Patrick Hoban’s initial close-range attempt was blocked out by Lewis Banks, but only into the path of Murray, who had all the time in the world before firing past Ed McGinty and several Sligo defenders.

The Lilywhites looked comfortable throughout the remainder of the first half without creating anything noteworthy, although Han Jeong-Woo did fire over from a tight angle; while Daniel Cleary headed off target after getting on the end of a good Murray delivery.

Dundalk really should have added to their lead on 62 minutes when Hoban – in what looked a lost cause – brilliantly held off the challenge of Mahon before slipping Michael Duffy through on goal, but McGinty was equal to the effort, crucially saving with his feet.

Much to the delight to the vociferous Oriel crowd, a third goal did arrive just a minute later when Cleary’s wayward pass was kept in by Duffy, and his low cross from the left was turned home by Hoban, although Mahon could well have gotten the final touch on it.

Dundalk added a fourth deep in stoppage-time when Duffy took it past Colm Horgan before playing it out to Hoban, who took a touch before beating the despairing McGinty.