A look back at last season's meetings between Dundalk and Bohemians 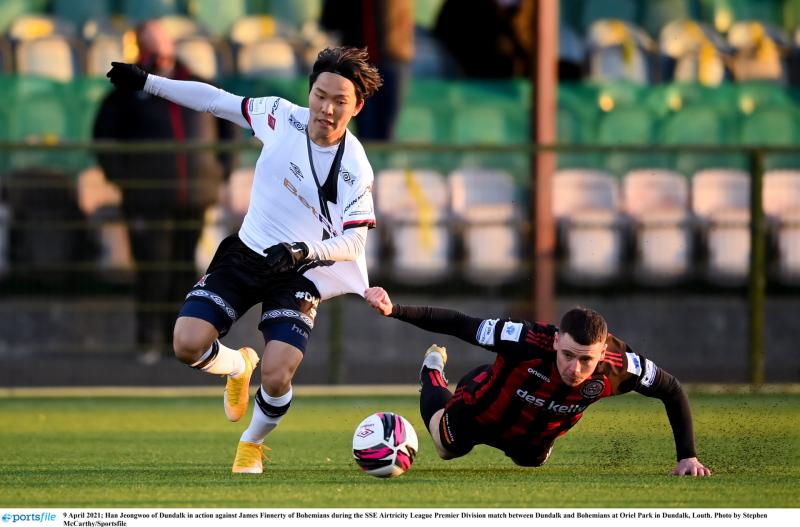 After a tough opening night at home to Derry City, Dundalk make their first away trip of the season in the SSE Airtricity League when they face Bohemians in Dalymount Park tonight.

Ahead of the game the Democrat looks back at the four league meetings between the sides in 2021, to refresh your minds as to how the Lilywhites faired against the Gypsies.

Former Lilywhite Georgie Kelly bags the winner for the Gypsies

Georgie Kelly’s penalty was all that separated the sides, as Dundalk’s winless run in the SSE Airtricity League was extended to a damning seven matches stretching back to last October. It was their worst start to a season in 15 years.

Following mistakes in consecutive weeks, goalkeeper Alessio Abibi was dropped in place of veteran Peter Cherrie who was making his second Oriel debut – 12 years after the first one.

The hosts started well and Andy Boyle’s header from a Michael Duffy corner hit the crossbar shortly before the latter dragged a shot wide, but James Talbot had it covered in any case.

A beautiful first touch and shot from Raivis Jurkovskis trickled just wide, but the Latvian international was culpable seconds later, with his loss of possession preceding Daniel Cleary’s foul inside the box on Ross Tierney, as Bohs were awarded a penalty on 12 minutes.

Against his former employers, Georgie Kelly made absolutely no mistake from the spot, sending Cherrie the wrong way as the pressure mounted on the Dundalk management team.

Patrick Hoban, Sam Stanton and substitute Patrick McEleney came closest to finding an equaliser as the Lilywhites pushed forward, however they could not get past James Talbot in the Bohs goal.

Dundalk had late penalty appeals waved away when from Darragh Leahy’s cross, the ball struck the arm of Rob Cornwall, while Michael Duffy fired a shot inches wide in the dying embers but sadly the Dubliners hung on for a valuable three points.

Georgie Kelly came back to haunt his former club once more, this time doing so with with a perfect hat-trick.

Bohs took the lead in what was the first attack of the game inside five minutes, when Georgie Kelly turned and finished from close range after being cleverly played in by Ross Tierney.

Dundalk found themselves two-nil down before the match was ten minutes old, as Tyreke Wilson curled a spectacular free-kick up and over the wall and beyond the grasp of Alessio Abibi.

Bohs got a deserved third five minutes after the restart, when Burt found Georgie Kelly after a quick counter-attack, with the ex-Dundalk man finishing the move he started with ease.

Keith Long’s side were reduced to ten players when their captain, Wilson, received a second yellow card for a foul on Daniel Kelly, but despite their disadvantage, Bohs never caved.

Dundalk had chances on the back of that dismissal – with Wilfried Zahibo’s header saved on the line by Talbot, before Michael Duffy’s free-kick was easily kept out by the Bohs keeper.

However, it was The Gypsies who grabbed a fourth on 64 minutes, as Georgie Kelly headed home from Ali Coote’s free to complete what was a perfect hat-trick against his former club.

Dundalk’s misery was compounded by the dismissal of Cameron Dummigan, who received his marching orders by referee Ben Connolly for a second yellow after he pulled down Burt.

Greg Sloggett did manage to get the Lilywhites on the scoresheet with ten minutes remaining, but Promise Omochere added a fifth in stoppage-time for Bohs, as Dundalk succumbed to a heavy defeat in the capital.

Euphoria at Oriel as Dundalk get out of relegation Play Offs

Dundalk FC lifted themselves out of relegation danger in the SSE Airtricity League after they recorded a 2-1 win over Bohemians in what was an entertaining match at Oriel Park.

Goals in either half from Sam Stanton and Patrick Hoban had put Vinny Perth’s side in total control, but Tyreke Wilson’s 71st-minute strike ensured a nerve-racking finish.

A close first half was perhaps edged by Dundalk, but it was Bohs that had the first shot inside 15 seconds when Conor Levingston’s audacious attempt dipped just over the bar.

Though the visitors were enjoying good spells of possession, Dundalk were creating the better chances – starting with Darragh Leahy’s skied effort from just outside the box.

The hosts took a deserved lead right on the stroke of half-time after Michael Duffy played it into Stanton, who brilliantly turned Finnerty before firing into the roof of the net.

That was the industrious Scotsman’s first goal for the club and it could hardly have come at a better time, as Dundalk looked to lift themselves out of the bottom two on the night.

Dawson Devoy saw two shots go over in quick succession; while at the other end, Stanton – after combining with Duffy – had a low effort tipped around the post by Talbot.

Despite that magnificent save, Dundalk doubled their lead on 59 minutes from the resulting corner which eventually found its way to Hoban, who took a touch before unleashing a volley from outside the box which gave the Bohs goalkeeper no chance.

Bohs did pull a goal back on 71 minutes through Wilson, whose shot went through the Dundalk rear-guard.

The Gypsies threw the kitchen sink at Dundalk after that and Cherrie did brilliantly to deny Rory Feely, as this rip-roaring Monday night contest entered its closing stages. However, Dundalk held on to lift themselves into eighth-place in the league standings. From there they never looked back.

Dundalk had some chances early on, with Michael Duffy’s effort going straight down the throat of James Talbot, before in-form Sean Murray drilled a shot well wide of the mark.

At the other end, Bohs were beginning to assert some authority, and Andy Lyons saw his attempt deflect off Dundalk captain Andy Boyle and out for a corner, which was headed over by the league’s top marksman, Georgie Kelly, who was left unmarked in the box.

However, it was the visiting side that hit the front on 28 minutes when Liam Burt’s header back to Talbot saw the Bohs goalkeeper collide with Patrick Hoban, with the ball falling kindly to Ben Amar, who then scored what was his first league goal for the club.

in the second half the Gypsies upped their workrate and continued to try and break through the Dundalk reargaurd, Tyreke Wilson and Promise Omechere coming closest to beating Peter Cherrie in the Dundalk net.

The Lilywhites should have doubled their lead when Will Patching’s shot stung the hands of Talbot, with the returning David McMillan blazing over from the resulting rebound.

But, Bohs were awarded a penalty in stoppage-time after Daniel Cleary committed a foul on Ali Coote and Georgie Kelly made no mistake despite the best efforts of Cherrie as the sides shared the points in Oriel.