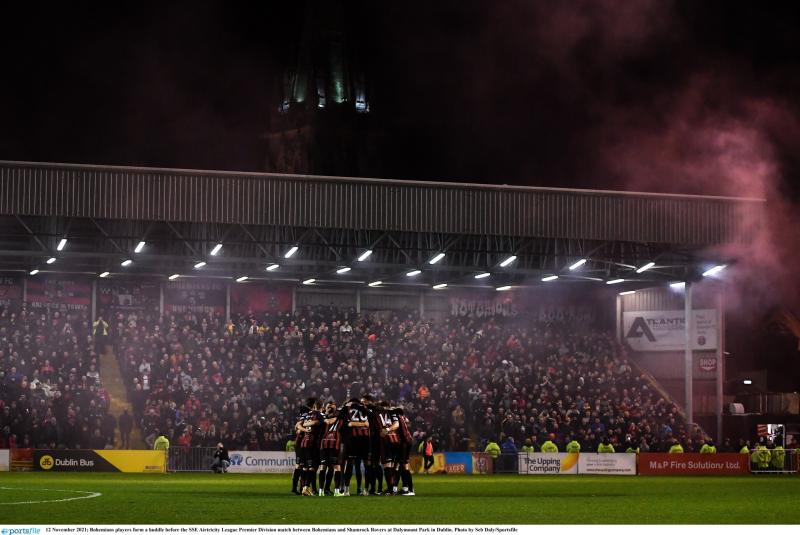 A full house is expected in Dublin for Dundalk's clash with Bohemians in Dalymount Park. (Pic: Sportsfile)

After a packed Oriel Park were treated to a thrilling four goal draw against Derry City last week, the action now continues for Dundalk as they head to Dalymount Park to face Bohemians tonight (kick off 7:45PM).

Keith Long's men go into the match cold, having had their opening round match with Sligo Rovers postponed due to Storm Eunice, but with a sold out crowd expected in Phibsboro, the lilywhites are sure to be greeted to a hostile atmosphere.

“It was a good performance last Friday and we have a good week of training behind us so we’re all looking forward to it,” first team manager Dave Mackey told dundalkfc.com.

“Last week’s game was the first time a lot of our players have performed in front of a crowd like that and we hope they can take belief from it because there’ll be another great atmosphere in Dalymount Park.

“Bohs didn’t play but they have been very good in pre-season and they will be ready to go. We have to be ready for that but we have prepared very well so it will be a good encounter.”

The Gypsies made it all the way to the FAI Cup Final last year, falling short narrowly in a penalty shoot out to new Dundalk head coach Stephen O'Donnell's old team St Pats.

The side Dundalk face now is one with a very different make up after a host of established players left the club over the winter including Georgie Kelly, Ross Tierney, Rob Cornwall, Andy Lyons and Keith Ward who switched Dalymount for Oriel.

Despite that, Mackey believes that Bohs manager Keith Long has assembled a strong panel for the season ahead with former Dundalk players, Jordan Flores and Junior Ogedi-Uzokwe, two of his new recruits.

“Keith and his assistant Trevor Croly are one of the longest-serving management teams in the league and they have built a very stable club there over the past few years, a club that has shown it can compete at the highest level,” said Mackey.

“They would have been disappointed to miss out on qualifying for Europe last year and they have lost players but they both have a keen eye for talent, here and abroad, and the ability to bring in quality replacements.”

One of eight debutants to competitive action last week was Paul Doyle, who has come to the Lilywhites after helping UCD secure their place back in the Premier Division last year.

The Mayo native relished the chance to play at a packed Oriel Park and knows conditions won't be made easy for them tonight in Dublin. He was happy with his side's performance last Friday, but knows they need to keep upping their levels if they are to be in the race for honours in 2022.

"It's a different challenge and you have to go and meet it face to face, it is almost like the first game of the season again as they didn't play last week" stated the former UCD captain when speaking to the club's media team.

"Dalymount is going to be packed but we just have to keep going up levels week to week. It is not about just rising up for the first game of the season and then letting it drop off, you have to keep going through the gears and getting better and improving each week and hopefully tonight we can take it up a notch again and see where that takes us."

The midfielder is well aware of the dangers the home side possess despite having not played them much in his own career in recent seasons. The players have studied the Dubliners and he feels a strong start will be the key to success for either team.

"We know what their threats are. They've got power up front, the front three are direct and they have a good striker, around strong players and powerful runners.

"But they'll know about us too and it is just about matching the fight, for that first 15 minutes, and stamping your authority on the game from there."

Long-term absentee John Mountney remains out but Darragh Leahy is hoping to be involved after missing the game with Derry City with a knock picked up in the Jim Malone Cup. Otherwise, head coach Stephen O’Donnell has no fresh injury concerns.

The clash against Bohs will be streamed live online via the LOI TV platform, with passes costing €7 each – a €2 increase on last season’s rates.