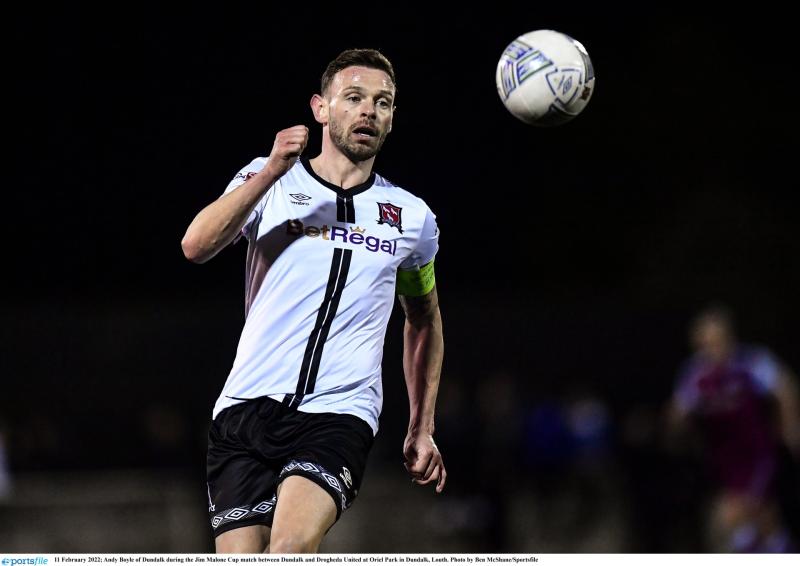 The defender feels he was fouled in the lead up to Derry City's first goal in their 2-2 draw at Oriel Park last week. (Pic: Sportsfile)

Steven Bradley put Dundalk ahead with a sublime goal on 32 minutes, but Derry levelled five minutes before half-time when Thomson turned home a Jamie McGonigle cross.

However, in the build-up to that goal, Boyle was outmuscled by McGonigle on the right, with the Derry man proceeding to race through before setting up Thomson for the finish.

Speaking with The Democrat afterwards, Boyle protested: “The first goal – I’m going to say I was fouled and I thought it was a foul in the build-up. Listen, you get some of them and over the course of the season, you’re hoping they even themselves out.”

Dundalk re-took the lead on 73 minutes through Mark Connolly – only for McGonigle to haunt The Lilywhites once more with another equaliser for Derry right on 78 minutes.

Despite surrendering a lead twice on the night, Dundalk earned much acclaim for their performance, with several debutants impressing what was a strong Oriel following.

“To be fair, we started well and there was plenty of energy about the way we played,” Boyle added. “I think you could see that in the game.

“Ultimately, we’re probably disappointed in the result. To go ahead twice in the game and not get the victory.

“But, we’ve set a benchmark I think for the rest of the season and that’s where we have to get to every week. If we perform like that, most times over the course of the season, we’ll win games.”

Apart from coming on as a late substitute in the Jim Malone Cup match against Drogheda United, Boyle hadn’t featured at all for Dundalk in pre-season due to injury.

“It’s fine now,” he said when asked about his injury. “I haven’t trained a whole lot, but I enjoyed it. Obviously, the more you train and play and get more minutes under the belt – I just got half-an-hour against Drogheda. I was happy to be out there and trying to help the team.”