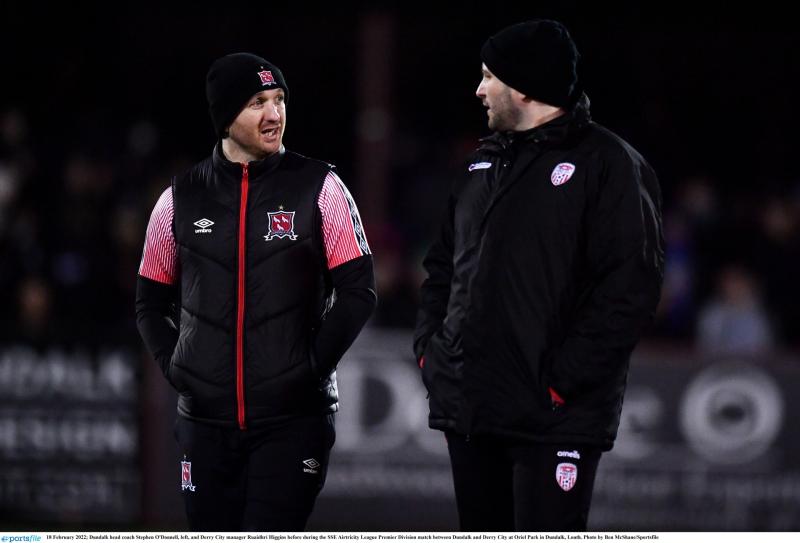 An air of optimism returned to Oriel Park last Friday – with Stephen O’Donnell taking plenty of positives from his first competitive game as the new Dundalk FC head coach.

Up against one of the SSE Airtricity League title favourites, Derry City, in front of approximately 3,500 spectators, Dundalk produced an encouraging display which saw them twice take the lead in either half through Steven Bradley and Mark Connolly.

However, Dundalk were never ahead at any stage of the night for more than ten minutes, as Joe Thomson and Jamie McGonigle both levelled for Derry in a game that finished 2-2.

“It was tough conditions,” O’Donnell told The Democrat. “We were against the wind second half and Derry were against it the first half. I thought when we went 2-1 up, we had arrested momentum back in our favour and I thought if there was another team going to score, it would have been us.

“We’d be disappointed with both goals we’ve conceded, but there was plenty of positives to work with. It was two breakaways – both their goals – where there didn’t seem loads of danger from where they started the attacks.

“We’ll look back on it, but as I’ve said, there was lots of positives and a good foundation to build on. Derry are a decent team and they have dangerous players, so they’re always going to carry a threat.”

Bradley and Connolly – both of whom have joined on loan from Scottish football – were just two of eight full debutants selected by O’Donnell on the opening night of the season.

“I thought Stevie was very good all night. It’s not easy for a young player, he’s only in the door and to go and perform the way he did and express himself the way he did was excellent.

“Mark has had a brilliant career and has a very good pedigree. He’s played over 200-300 games cross-channel in Scotland and England, so he’s a very experienced player and we’re delighted to have him on board. He has a great character and brings it every day in training, so I can’t ask for any more.”

Much changed at Oriel during the off-season, with 12 new players brought into the club, and O’Donnell accepts that it’s going to take time for his new-look team to settle.

“We can get a lot, lot better,” he said. “There was an element of the unknown. I think we had only Pat (Hoban) and Andy (Boyle) that started who would have been here last season. There were lots and lots of new players.

“There was good encouragement and I think the players would have really enjoyed playing in front of the home crowd and getting a feel for Oriel, so we’re looking forward to lots more.”

O’Donnell captained Dundalk throughout their trophy-laden spell under Stephen Kenny, but he is not getting drawn on comparisons to the current Republic of Ireland manager.

“We all have our own identity,” he added. “We want to play on the front foot and I suppose Stephen did as well. We want to be taking the games to all the teams and I thought we done that for the most part tonight.

“That’s our identity and there will be tweaks along the way in regards systems because we’re quite flexible as well in regards personnel and system. We’re looking forward to developing the group and working with them.”

For Bohs, Friday will represent their first game of the new season after last week’s fixture against Sligo Rovers at The Showgrounds was postponed following a pitch inspection.

Both players have since moved on from their respective clubs, but Kelly’s departure from Bohs has been particularly felt as the PFAI Player of the Year bagged 26 goals in 2021.

Junior Ogedi-Uzokwe and Jordan Flores (ex-Dundalk) could debut for Bohs on Friday, while on the other side, Keith Ward is in contention to feature against his old club.

Another former Bohs player, Darragh Leahy, could return after missing out on the Derry game due to a knock, but John Mountney’s knee injury should keep him out until April.

Dundalk’s games against Bohs and Finn Harps will both be streamed live online via the LOI TV platform, with passes costing €7 each – a €2 increase on last season’s rates.