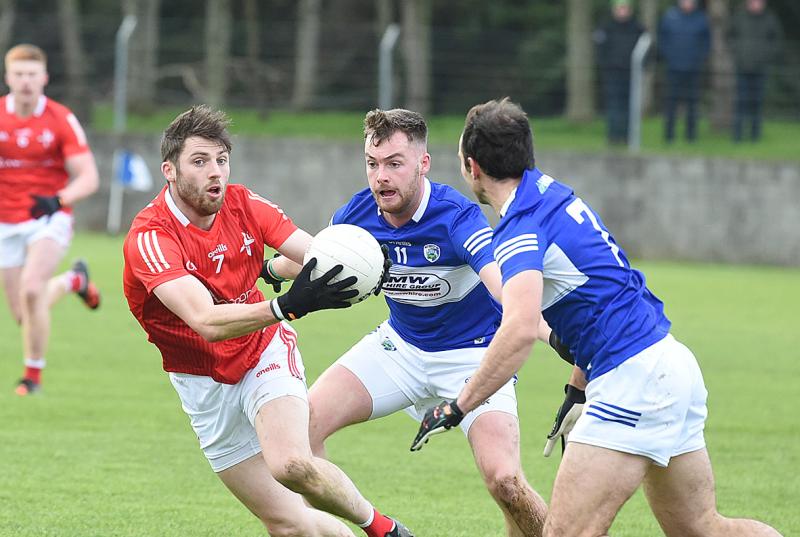 A great start, a strong finish, but sadly the Louth footballers were still on the losing side as they opened their National League campaign with a defeat to Laois.

That was with a strong breeze aiding them and when pitted against this wind the home side went 24 minutes without a score of any kind, while a rapid-fire brace of early goals from Gary Walsh and Sean O’Flynn put Laois in front by six. They led from here until the final whistle.

Under pressure Louth could have buckled and trailed by up to eight points at one stage before steadying the ship and winning the final quarter. Unfortunately, the fightback came too late as the clock was always against them. A gallant performance, but fruitless none the less.

The home side started fast, winning possession from the throw in and duly getting the ball into the hands of a returning Ciaran Downey who opened the scoring after just 18 seconds.

It was soon followed by a fine score from captain Sam Mulroy on two minutes who was also back in the Louth jersey for the first time since the championship defeat to Offaly.

After getting very little play in the first five minutes, Laois raced into the lead when they 1-1 in quick succession.

Eoin Lowry did well to field a fine mark which he calmly slotted over, while shortly afterwards Billy Sheehan’s side bagged their first goal. A huge turnover in the backs allowed Lowry to turn provider for Gary Walsh whose speed saw him dart away from Bevan Duffy before blasting it into the net from close range.

For the next 10 minutes of action, it was one way traffic, Louth putting huge pressure on Laois in both defence and attack and forcing turnover after turnover.

When losing the ball, a wall of red jersey’s greeted the Laois men, who either dropped the ball or were tackled. Meanwhile they struggled badly to keep possession from their own kick outs, losing at least of half of their 16 restarts with Leonard Grey usually the man for Louth winning the ball in the air.

With this sort of dominance came wave after wave of attack, but in the end Louth would be punished for their lack of sharpness in front of the posts.

The first great chance to grab a goal came the way of Downey, who was on the end of a blistering team move involving Sean Healy, Conall McKeever and Mulroy, only for Laois keeper Danny Bolger to make a superb save to deny the Newtown Blues clubman.

That was 10 minutes in, just two minutes later Mulroy had his first chance for a three pointer, a good play which started with a mark from the impressive Leonard Grey ending with Mulroy along the endline with the goals at his mercy. But again, a big chance went abegging.

Bolger needed to bail out the O’Moore men for a second time later in the half, as once more the Louth attack cruised through on goal, this time it was Jay Hughes’ attempt being well saved.

Shooting was becoming a real problem for Louth as the majority of shots, even for points were not being taken by the Wee County, as they ended the half with eight wides and finished the contest with 12.

They relied heavily on frees to keep the scoreboard ticking, Mulroy bagging six in the first half to keep Louth in front. But while not getting many chances, due in large to losing so many kick outs, Laois managed to point when given the chance and trailed by just a point, 1-4 to 0-8 at half time.

Even at this stage, the opinion amongst the media was that the home side had probably thrown away their best chance of winning the match. Take even a portion of their missed goal attempts or point half of their eventual wides and they had a lead that could be protected.

Instead, they were there for the taking, a highly motivated Laois came knocking at the door and in the third quarter the Wee County buckled.

They kept them to just a point in the first 10 minutes following the restart, as Louth continued to have a decent amount of possession. The problem was, against the elements Sheehan’s side were able to negate the attack leading to Louth having to hold the ball more while working it over and back.

The cracks in the defence were nowhere to be found, while now it was Laois who were pushing up on the home side and making them work hard just for the chance to score. In this this quarter those chances were pretty much kept to zero.

Then came what was the decisive brace of goals on 47 and 49 minutes, as a series of Louth errors led to goals for Sean O’Flynn and Gary Walsh.

A short kickout was intercepted by Marc Barry, who duly fed Walsh. Coming down his shoulder was O’Flynn, who despite having his first attempt saved by Martin McEneaney duly found the back of the net with the rebound.

Then came Walsh with his second goal of the afternoon, a series of errors led to a turnover, and he was nicely found with a ball over the top. He took no prisoners as he blasted the ball past the St Pats keeper to put the men in Blue six points ahead.

While Louth did not lose a single kick out up to this point, their 100 percent strike rate was ended around this time also, their lack of control in the centre more noticeable following the departure through injury of Louth’s best performer on the day Leonard Grey. His presence around the middle was sorely missed.

In the end Laois hit 2-3 without reply, points from Walsh and Barry seeing them go eight in front with 15 minutes to play. At this stage with the rain teeming down many supporters were heading for the exits in the hopes of missing what looked a possible rout.

But to their credit, Louth never backed down from the challenge and bounced back well, Mulroy ending a 23-minute barren spell when tapping over a free on 59 minutes. They continued their onslaught on the Laois goal as they looked to reignite a comeback.

Conor Grimes had a great opportunity scuppered, catching it and kicking it when there was a chance to fist it into the net, while Bevan Duffy sped towards goal to get his hand onto a pass from Liam Jackson only for the ball to fly over instead of under the posts.

They did get the goal they probably deserved, but it came way too late into this second purple patch to have had any real impact on the result. A good ball from the Louth captain finding Ciaran Byrne who smashed it past Bolger on 72 minutes.

A Great finish, a dominant opening. But all that really matters is that it was Laois who left Ardee with the vital two points. There was plenty of good play, but a lot more to work on ahead of what really could be a make-or-break fixture with Longford in Pearse Park this Sunday (throw in 2PM).

It is followed by a date with Limerick on their home patch; two games that will decide whether it is promotion or survival that will be on the line come April. It could be long spring, but this team looks far from done. More twists and turns are sure to come. Whether they’re good or bad is the million-dollar question. Only time will tell.