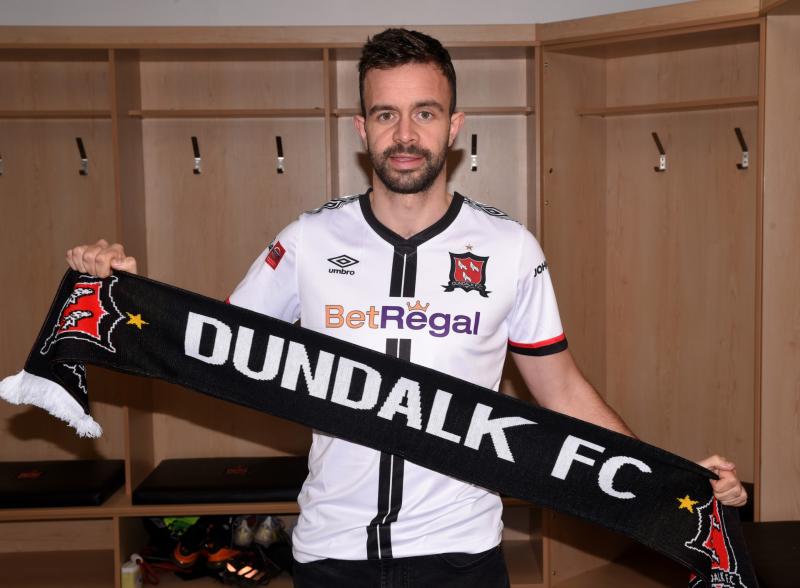 Robbie Benson will be back in the colours of Dundalk in 2022. (Pic: Dundalk FC/Ciaran Culligan)

For Dundalk fans it must feel like Christmas has come a week early as Stephen O'Donnell today unveiled another new signing that will be arriving at Oriel Park in 2022 and it is a man that will need no introduction.

After a successful spell with St Patrick's Athletic which ended with him slotting home the decisive final goal in the penalty shoot that that saw the Saints win the FAI Cup, Robbie Benson is returning to Dundalk.

The midfielder racked up an impressive 141 appearances between 2016 and 2019, winning three SSE Airtricity League titles and a clean sweep of domestic cup competitions. He bagged 27 goals in that time while also notching up 11 assists.

Lilywhites fans will have plenty of great memories of his time at Oriel Park, none more so then the vital goal he got in August 2016 against BATE Borisov that sealed Dundalk's place in the group stages of the UEFA Europa League.

“It’s great to be back,” he told dundalkfc.com, after finalising his move from Inchicore. “When I walked into Oriel Park to sign the contract, all of the old memories from my first spell here came back and I’m looking forward to replicating that again.

“When I left here the first time around I felt I had done all I could with the group that was there. I just wanted something new. Coming back, it’s a fresh start. The club has new owners, who look ambitious, new management and new players to a big degree. I can’t wait to get going again.

“I think I’ve learned a lot about the game in the last two years and I’m coming back a better player and as hungry as I ever was to succeed.”

The Dundalk Head coach will be no stranger to the Athlone native, having played alongside him at Dundalk before working under him at St Pats. O'Donnell's arrival played a big part in Benson deciding to return with plenty of other clubs enquiring about his services.

“When I started my career, Stephen was a big influence on me as a player and he helped me along the way. He is someone I look up to and I appreciate the involvement he has had on my career.

“He was great for me at St Pat’s and now that he has decided to come to Dundalk, I weighed up what I wanted to do, I looked at the project he wants to help build here, and I’m really looking forward to it."