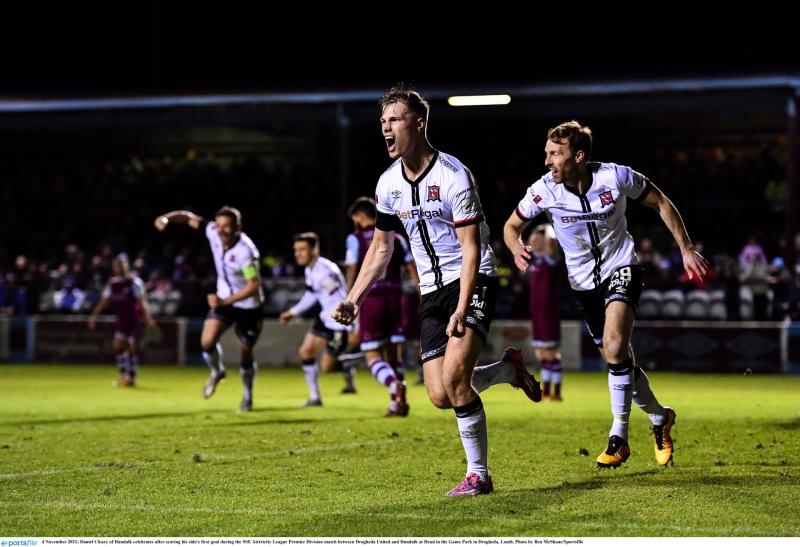 Daniel Cleary celebrates after scoring the winner for Dundalk in last night's Louth Derby against Drogheda United in Head in the Game Park. (Pic: Ben McShane/Sportsfile)

A first SSE Airtricity League win on the road since June could go a long way to ensuring Dundalk FC will be playing Premier Division football again next season, as they defeated Louth rivals Drogheda United 1-0 in what was a scrappy affair at Head in the Game Park.

At the same ground where they picked up their last away win, Daniel Cleary’s first goal in just over a year four minutes from time pulled Dundalk further away from danger.

Now six points clear of the relegation play-off position with an extra game played, an expected victory over Longford Town at Oriel Park on Sunday would give Vinny Perth’s side an outside chance of finishing fourth – which could result in European qualification.

The Lilywhites had first-half chances against Drogheda – the first of which came on 14 minutes when Patrick Hoban headed well over from a Sean Murray inswinging corner.

Murray himself went close when his close-range header was planted straight into the arms of David Odumosu after Daniel Kelly’s cross had deflected off Dane Massey.

The Drogheda goalkeeper – once on the books of Dundalk – wasn’t at all troubled by Murray’s more than speculative effort from just inside his own half on 21 minutes.

Dundalk had what looked a perfectly good goal ruled out on 37 minutes when from Michael Duffy’s free-kick, skipper Andy Boyle headed home, but was adjudged by referee Robert Harvey to have fouled ex-Dundalk favourite Massey in the process of doing so.

Six minutes into the second half, Will Patching was given far too much freedom by Drogheda before unleashing a shot that had to be pushed onto the crossbar by Odumosu.

Murray should have done better when he scuffed his attempt wide, while not long after that miss, he turned wide from Duffy’s cross whilst under pressure from Daniel O’Reilly.

However, it was Murray who created a crucial winner for Dundalk on 86 minutes when his free was headed by Duffy and palmed away by Odumosu, but only straight into the path of Cleary, who scored his first of the season – cue amazing scenes in the away end.

Dundalk withstood four minutes of stoppage-time after that to hold on for what was back-to-back clean sheets for the first time in the league this year, as they moved above Drogheda in the table and into sixth ahead of their penultimate fixture on Sunday.

Final report into fatal Rescue 116 crash to be published today

Louth man, Captain Mark Duffy, was one of four crewmembers who died in the crash