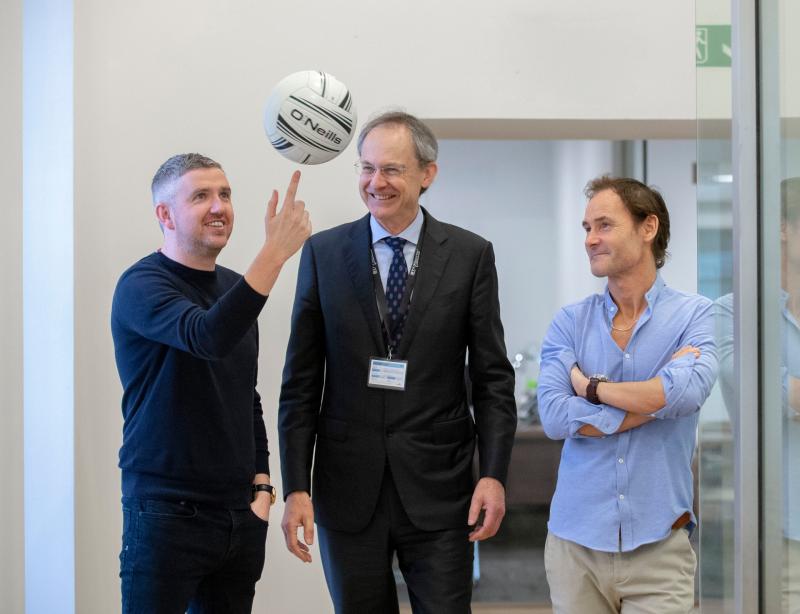 There has been a lot happening at Oriel Park in the past week both on and off the field since I wrote my last column. Off the field Dundalk saw the club doctor, the sports strength and conditioning officer and the physiotherapist leave the club.

I don’t have a day when they departed but the news broke two days after the club were knocked out of the cup. Things worsened for Dundalk on the field when they lost to St Pat’s 1-0 in a league game they could have got something out of.

The loss came only 72 hours after they were beaten by the same side in the cup. But the loss in the League plunged Dundalk back into the play off crisis. Yet last Friday Vinny Perth’s men gave themselves some breathing space with a marvellous 1-0 win over Waterford.

The win meant that Dundalk’s battle to avoid the play-off spot had been given a great boost. But while there is drama on the pitch, the frenzy off it has been speeding up.

As Peak6 prepare to leave, a battle royal is developing for the ownership. On one side is local company Stats Sports and also former club owner Andy Connolly.

On the other side is a Consortium led by Ali Shams Mohammad Pour, who is a British born Iranian businessman and best known in this country for being the owner of Glentoran FC.

Pour has put together a team of executives that Probellum’s President Richard Schaffer believes will offer a new dimension to boxing. Mr Schaffer is a former Chief of Golden Boy and Ringstar Promotions.

The launch of Ali Pour’s new boxing media company in September has already promised to run 100 shows in their opening year.

The Ali Shams Pour’s owned company has taken a global approach and has set up offices in the United States, the Middle East, the United Kingdom and other locations around the world.

They also have a ‘Colaboration is key’ policy. To that end they have already set up promotional alliances in Europe, Africa, Russia, The Middle East and Australia.

They have some of the biggest names in the Boxing world on board including Eddie Hearn’s Matchroom and Kalle and Nisse Sauerland with Wassermann Boxing.

Probellum say they look forward to collaborating with everyone from PBC to Golden Boy Promotions In the United States along with any other boxing promoter anywhere in the world.

Details of who they have linked up with in Ireland and their plans are ongoing but the fact they say they wish to empower the grassroots may suggest they won’t necessarily have to be one of the big promoters.

The people behind the north of Ireland Dundalk consortium are not known apart from the fact that it is being headed by Ali Pour. EX Sunderland CEO Mags Byrne is believed to have played a part in putting the Ali Pour consortium in contact with Peak6.

She is not part of the consortium now chasing the American company for the keys to Oriel Park. Her First For Players talent agency has had a number of connections with Dundalk FC.

The other group seeking the keys of Oriel is Stats Sports and Andy Connolly. Started by its CEO, Dundalk man through and through Alan Clarke, Stats Sports have developed a worldwide reputation for its sport science, GPS technology and performance and analysis.

They are now prepared to take a prominent role in steadying the ship at Oriel along with former owner Andy Connolly. According to the Independent’s Daniel McDonnell their plans would include capitalizing on their links with a top Premier League side in England who they have a partnership with. They may bring in some of the club’s players on loan on a temporary basis.

But this will only happen if the Astro pitch at Oriel is replaced with a grass surface. It’s viewed as an obstacle to bring in youngsters from the Premier League.

Alan Clarke Stats Sports CEO has given his life to grassroots soccer in Dundalk. He is a quiet man and not one to want to be in the gaze of the media. Alan has always had strong links with local club Glenmuir. He ran schoolboy teams in the Dundalk Schoolboys league as well as senior teams in the Meath and District League now known as the North Eastern Counties League.

In midweek last week it looked as if Ali Pour’s consortium would win the battle for the keys of Oriel as they had put hard money on the table. Peak6 would certainly welcome a six-figure sum and that is why Stats Sports hopes looked dead in the water.

But as the weekend approached the pendulum began to tilt a little bit away from the Ali Pour consortium. The current owners came back to the local consortium and told them they would have to improve their offer if they wanted Oriel.

Stats Sport have been taking the position that Peak6 should hand back Oriel to them so it can be rebuilt after the enormous plummeting of the club’s position under the American rule. The club is a mess on and off the pitch. This is not the way it was handed to Peak6 back in 2018.

Stats Sports also feel Peak6 should leave some money in the bank for them. A figure of €250,000 has been mentioned as to what Peak6 may leave. Vinny Perth spoke to me after the Waterford game on Friday. He said he had pleaded with the owners to make the right decision, whatever that is as far as who the new consortium will be.

Vinny stated he told Peak6 to make sure the people and the town of Dundalk are represented in the club going forward. He says he hopes the current owners take this on board. Perth spent the weekend again pleading with Peak6 to make sure the DNA of Dundalk is kept in the club going forward. He clarified that he would like to think this either would or should happen.

Perth felt the supporters have been magnificent this season. The bond between players and supporters could be clearly seen by players clapping supporters in the rain for five minutes after the Waterford game.

He also hit out at an unidentified Twitter account which said that Dundalk’s senior players did not want a local consortium. I have done my own research on this, and this statement is pure Lies. Bryan Gartland also hit out angrily at the twitter post.

It’s understood that no decision has even been made that Peak6 are going to sell at all. I’m told that it would not be surprising to see Peak6 partner with Stats Sports in the ownership and running of the club.

This would be fantastic news if both sides could come to a deal such as that if it means the Dundalk DNA returns to the ownership of Oriel. As far Ali Pur’s Consortium goes I just want the club back in local hands, even if it does mean Stats Sports working with Peak6 to run the club.

I believe we would see many who have left the club coming back again giving it a major reboot. So I encourage supporters to go for the local consortium at best and at worst a Stats Sports/Peak6 running of the club together.

I do not see the club being run by an outside consortium period, no matter how much money they have. Vinny Perth did say on Friday that the past seven days since being knocked out of the cup, losing to Pats and losing his backroom team had been the worst period in his life.

He said those words after seeing Dundalk play very well against Waterford as they won 1-0. It lifts some pressure off the struggle against the play-offs but they are by no means out of it. Daniel Kelly, who is a highly talented player, slotted the ball home to put Dundalk in front. It was the clinching goal. Peter Cherrie pulled off two top saves to keep the Munster side at bay.

Vinny Perth, in his after-match interview was at pains to say that Dundalk’s playing budget for the year was €2 million and not €4 million. He also added that Greg Sloggett had not signed a new contract as had been reported.

Dundalk play Drogheda in another vital game to avoid the play offs this Thursday. It is the club’s last away game of the season.

And so the battle for Oriel may not last much longer. To me it must go to Stats Sports or a Peak6 Stats Sports consortium. Have a safe week and let’s hope Peak6 make the right decision.