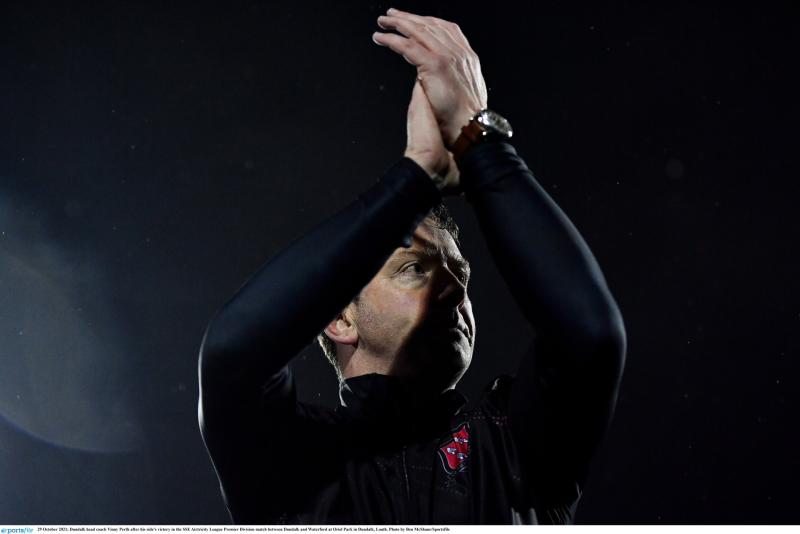 Dundalk FC head coach Vinny Perth says he has pleaded with the club’s unpopular owners, Peak6, to restore a community spirit back into Oriel Park as a sale draws nearer.

The American-based investment firm purchased Dundalk back in 2018, but their running of the club has come under much scrutiny, particularly over the past two years.

Peak6 are expected to relinquish their control sooner rather than later, with a consortium made up of local business personnel understood to have expressed interest.

Believed to be in pole position, however, are a Northern Irish consortium with links to Glentoran FC owner Ali Pour, as well as First for Players managing director Mags Byrne.

First for Players, a football agency for whom current Dundalk sporting director Jim Magilton is a client, have brokered many of the club’s transfer dealings in recent seasons.

Perth, in contrast, holds an opinion that the club should only be put back into the hands of those who are connected and have the best interests of the local community at heart.

“I’ve pleaded with the owners to make the very right decision,” he told The Democrat. “To make sure that the community and the town of Dundalk is represented in this club going forward. I’ve pleaded with them to do that. I hope they take that on board.

“I’ll have discussions with them over the next couple of days again and plead with them that the DNA of Dundalk is kept in this club going forward. I would like to think that should happen.”

The Dundalk head coach also insists that no final decision relating to the club’s future has been made, and that Peak6 could yet remain in charge beyond the end of the year.

“They’re not necessarily going to pass the club on,” he added. “There’s no decision made in any way, shape or form is my understanding.

“I hope for the good of the club, they will make the correct decision. I’ve pleaded with them to do that. I’d like to think they will listen to my voice and I’ll be talking to them again over the weekend.

Perth returned to the club as head coach in June – ten months after being sacked – but with his contract up at the end of year, isn’t expected to remain beyond the current term.

“I can’t be the spokesman for this football club anymore. I tried to be and I felt that the club was fixable. I wanted to do it with the best interests at heart. I knew it was going to be difficult when we went out of Europe.

“There’s a lot of stuff going on where a false can fly around the world very quickly, but the truth generally takes a good bit to get out.

“I’m disappointed for the players because I think they’ve been under attack all season. Have they done their business right on the pitch? Sometimes yes, sometimes no, but the environment hasn’t been good enough for them.

“To be honest, the last seven days have been the most difficult of my life from a personal point of view and a professional point of view. The one thing I did say in my very first interview is I’ll make people fight for the jersey and put pride back in the jersey.

“I’m delighted I came back to the club because I proved to myself that I’m a bloody good coach and they’ve proved they’re bloody good players, but it’s been the most difficult week of my life and I’m not going to hide away from that.”

Dundalk are back in SSE Airtricity League action this week – first with a trip to Drogheda United tonight (kick-off, 7.45pm) before welcoming Longford Town in their penultimate fixture of the season on Sunday evening (kick-off, 5pm).

15 excuses GAA teams give for losing the county final