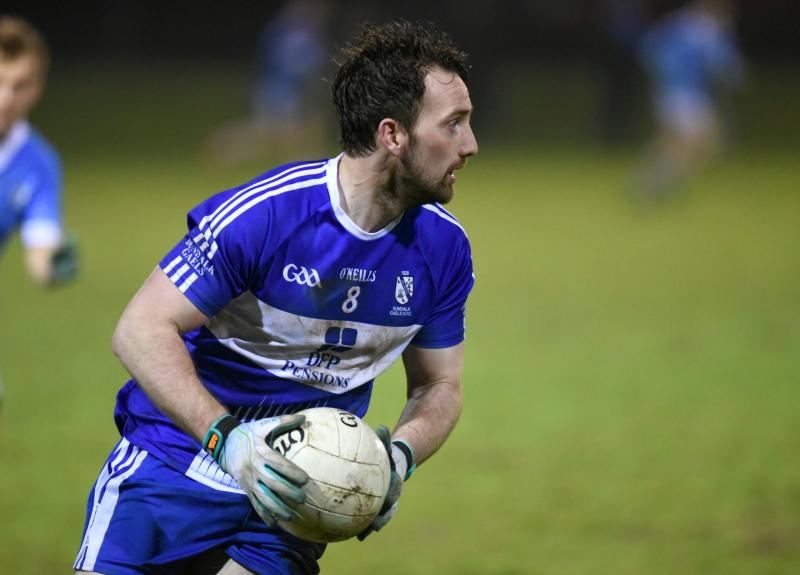 Having exited the championship with somewhat of a whimper, the Geraldines saved their best performance for when the stakes could not have been higher having survived a late Dundalk Gaels fightback to secure their SFC status by a two-point margin.

On the balance of play, those that attended a mild Clan na Gael Park on Saturday evening would probably agree that the better team prevailed.

In a match fairly low on quality, it was the Geraldines who came out of the traps, playing like a team determined to heal a few wounds following heavy defeats to the Dreadnots and Naomh Mairtin in the SFC Group Stages.

The Haggardstown side had four scores on the board in the opening 10 minutes, with Shane O’Hanlon and Sean McEneaney frees finding the range either side of an excellent Gareth Neacy kick from distance and a score from Fergal McDonald after great work by O’Hanlon.

Playing almost as an extra midfielder, McDonald won several crucial breaks from kickouts, and struck a significant dent in the Gaels’ hopes of survival with a razor-sharp finish to the net after taking a Shane Rogers pass off the shoulder to make it 1-5 to 0-2 in the Gers favour approaching half time.

Before that, the Gaels whose slow and sideways passing saw eight of their 14 first half attacks turned over, finally opened their account through Gary Shevlin on 14 minutes.

And after Shane O’Hanlon and Dylan McKeown traded scores, McDonald then raised that green flag to drive home the Gers’ superiority. Another Sean McEneaney free extended that lead, while a Dylan McKeown free left it at 1-6 to 0-3 in the Gers’ favour at the break.

The Gaels tried to up the ante in the second half, with Gerard McSorley and Barry Watters introduced during the second 30 minutes. Yet it was the Gers who kicked the opening two scores.

The tireless Matt Corcoran who won his fair share of kickouts alongside Fearghal McDonald, set up Shane Rogers for an impressive point shooting into the club house goals, while another Shane O’Hanlon free left it at 1-8 to 0-3 in their favour five minutes into that second period.

It seemed as if the Gers were all set for victory, but Dundalk Gaels stepped things up for the final 20 minutes to try to launch a mini revival.

Dylan McKeown who finished with 16 possessions to his credit, converted another free, before teeing up Derek Crilly for a well-taken point to close that gap to six.

McKeown once again nailed another place kick, but you felt the Gaels needed that goal to set the cat amongst the pigeons.

A Gerard McSorley crossfield ball was gathered by fellow sub Barry Watters in the square, the ball fell to Emmet Lindsay who blasted over the bar with goal on his mind.

This left it at 1-8 to 0-7 as the Gaels stepped things up, turning the Gers over 15 times in that second half, compared to only seven in the opening 30 minutes.

However, cometh the hour, cometh Fearghal McDonald. Playing in that more advanced role, despite wearing number two on his back was huge for the Gers and his second point of the game gave the Gers a significant five-point buffer at 1-9 to 0-7 with 10 minutes remaining.

Back came the Gaels once again, and two further McKeown frees continued to chip away at that scoreboard.

In that time, Sean Murray broke the line and bared down on the Gers goal, Murray played in Barry Watters whose shot was smartly saved by Sean McEneaney coming to the Gers’ rescue.

As did Tiarnan Hand who cut out an Emmet Lindsay pass across the goal after keeper McEneaney was caught in possession in a dangerous area earlier. Eamon Kenny kicked another point in stoppage time, but the Gaels ran out of time as the Gers held on to preserve their SFC status for 2022.

St Patrick’s secured their place in the race for the Joe Ward Cup in 2022 with a workmanlike performance over a plucky O’Connell’s outfit.

It wasn’t until Cathal Grogan found the net before the second half water break that you could say with any certainty what way this relegation play off would finish.

Credit must go again to Wayne Kierans and Shane Bannon who have come in and made the Castlebellingham based outfit more than competitive. When you consider the loss of players that they have had, then playing senior football this past four seasons has been quite the feat.

On the other hand the former kingpins, St Patricks could boast inter county experience in every line of the field with the added luxury of bringing Eoin O’Connor in as a late substitute.

That further highlighted the talent gap available to the two sides, however with senior status on the line this was a competitive outing.

O’Connell’s wingback Jackie Agnew gave his side an early lead after a scoreless eight minutes of action. Backs to the walls, Agnew provided the relief and reward for their only lead in the contest.

Slowly but surely Pats would find their groove but not before they would kick three wides and land the same number of short efforts into Stuart Reynolds hands. Aidan McCann kept a wild shot alive along the end line to spin over and finally settle his side down.

After that, Jason Woods especially upped the gears and would kick three scores in a row. Paddy Keenan and Leonard Grey then got in on the act to exert their dominance on the scoreboard.

Agnew would score all of his sides first half points and the ferocious wing back kicked the next three points of the game. His third point was an excellent effort considering the pressure the Lordship men put on their opponents in the build-up.

With the margin down to three points, Danny O’Connor spurning two glorious goal chances, the O’Connell’s endeavour meant they were still in the game. O’Connor would point along with the impressive Ciarán Murphy to make it 0-9 to 0-4 at half time.

The second half was a much tenser affair with tired bodies and both teams going scoreless for long stretches. Woods clipped over his fourth point and David Hoey responded.

However, that was all the scoring before Cathal Grogan countered from the centre of the field to finally push the game beyond the O’Connell’s on the 46th minute of this important game.

Eoin O’Connor came into the game at that stage and walloped over a long-range score to tee up the final quarter at 1-11 to 0-5. The O’Connell’s would not score again and they find themselves in a relegation final against Dundalk Gaels this weekend.

Jack Murphy closed the game out in the final quarter with a brace of points but despite the victory, the season would end on a sour note for Johnny Magee’s men when goalscorer Grogan received his marching orders for his second yellow card at the death.

Having a ball in Dundalk!