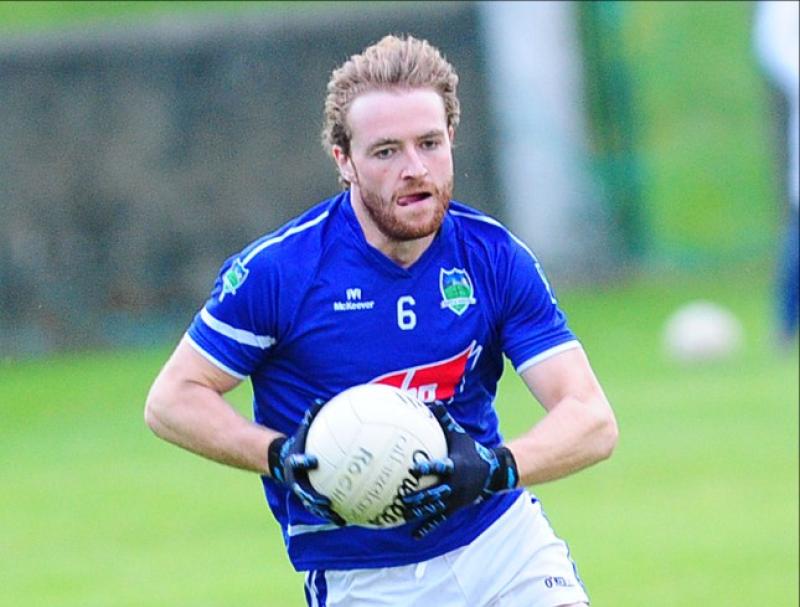 On a night which marked 20 years since the Togher side’s Intermediate Championship success of 2001, Brendan Healy’s side must face a relegation play off final to stay at this grade.

The Clans made the most of the wind advantage in that first half, with goals from Robbie Curran and Conall McKeever setting Padraig Fallon’s side on their way to a 2-6 to 0-4 lead at the break.

Playing with that breeze at their backs, the Clans pressed up on the Finbarrs kickout, winning seven out of 13 on the Togher side’s kickout in that first half. This dominance saw them lead by 1-4 to no score after 12 minutes and 1-6 to 0-1 by the first half water break.

Paul Crewe who finished with 26 possessions kicked the opening score of the match inside the opening minute, before Shane Carroll marked his return from suspension to kick the second point after two minutes.

Things got even better for the Dundalk side, as an excellent turnover from Carroll led to Robbie Curran crashing the ball to the net for the opening major. A free from Curran followed, before Sean O’Hanlon showed great industry to make it 1-4 to 0-0.

The Finbarrs finally got off the mark through Ciaran Markey. Unsurprisingly the point inevitably came from a move involving Conor Osborne. Stephen O’Reilly, who was always willing to run at the Clans defence and break lines kicked a second point for Naomh Fionnbarra.

However, at the other end, Conal McKeever broke free to drive the ball passed Togher keeper Daithi Woods to make it 2-6 to 0-2 approaching half time, as Naomh Fionnbarra’s defence parted like the red sea. Like Crewe, McKeever also finished with 26 possessions over the hour.

Stephen O’Reilly and Padraig Butterly kicked scores to close the gap, but the Clans deservedly were 2-6 to 0-4 ahead at the break, with Paul Martin and Robbie Curran finding the range for the Clans.

The Finbarrs made changes at half time, introducing Nicholas Butterly into midfield and moving forward Hugh Osborne to a deeper sweeping role.

Despite this, Brendan Healy’s side appeared unable to make major inroads into the Clans lead as Gavin Gaffney raised the first white flag of the second half to give the Clans a nine-point lead once again.

Robbie Curran traded frees with Thomas McCreesh, before Michael McArdle and another McCreesh free left it at 2-8 to 0-7 approaching the second half water break.

Thomas McCreesh and Robbie Curran traded scores again, before the impressive Paul Crewe kicked his second point and you felt that the Clans were all set to keep the Barrs at arm’s length and cruise to victory and IFC safety, as they led by 2-10 to 0-7 after 49 minutes.

However, things got heated in the final quarter on and off the pitch as a melee broke out, resulting in a red card issued to each side.

On the pitch, as the Clans failed to put away some presentable chances, the Finbarrs launched a mini comeback, inspired by a cracking goal from Martin Murphy after more excellent set up play from Conor Osborne.

That left just four points between the sides at 2-10 to 1-9 with eight minutes remaining, with points from Adam Hanratty and McCreesh (f) making things interesting as both sidelines could feel the tension and became more frantic.

Another free from McCreesh left just a kick of the ball between the sides, but the Clans closed out the game with a late score from substitute Stephen Coleman to maintain their IFC status.

A double penalty save at the start of the second half had a huge say in the O’Raghallaigh’s intermediate play off semi-final victory over Roche Emmets on Friday night in Darver.

Robert Smith stared down the prolific Barry O’Hare to dive to his left hand side and push the ball off the post.

Smith’s work was only half done as the ball bounced behind him and quickly he had to get up off the deck to deny O’Hare’s rebounding effort on the opposite side. That sequence ended with Glen Stewart blazing the loose ball wide.

Niall Flynn’s side were on the rocks at that stage and a goal would have put five between the sides with Roche very much in the ascendancy after a blistering start to the game.

To compound matters for shell shocked Roche, O’Raghallaigh’s went down the field and rattled over 1-4 to no reply in a stunning match winning sequence where the Drogheda side piled on the pressure on Emmet’s kick out.

The tactic bore fruit straight away when winger Ben Smyth got his first point and followed it up with the match winning goal. Substitute Olan Walshe’s attempt at a point, altered into a rugby like Garryowen, Smith collected the O’Neill’s along the end line and finished to the back of the net.

Roche were four up in the first half and would go on to lose by four. The eight-point turnaround never looked like coming such was the pace and energy of Roche’s terrific start to the contest.

O’Hare started with an excellent mark after Caoimhín Reilly picked his talisman out with a neat footpass, Glen Stewart was in on the blitz straightaway with the next two scores.

Despite being outplayed, Kyle McElroy’s class allowed the hoops a much-needed foothold in the game. The eighteen-year-old landed a 45’ out of nothing, quickly followed up with a sweet point.

Peter Lynch then kicked the point of the game for Roche. After finding O’Hare with a booming foot pass Lynch carried on his run to complete the one-two and clip it over the bar. O’Hare would add two more to his tally to give Roche their largest lead in the contest, 0-6 to 0-2.

But right at the end of the half, O’Raghallaigh’s showed all their grit and well of experience to narrow the gap ahead of the second half onslaught.

Ben Rogan sandwiched an Eoin Moore point to make it 0-7 to 0-5 at half time. Then came the momentum shifting penalty save from Smith and his namesake Ben’s goal at the other end.

Barry O’Hare did have chances to respond with free’s but couldn’t take them, he would get to redeem himself in the final quarter with two free’s before James McDonnell made it a two point game but McElroy and Rogan combined again to pick Emmets off at the death.

O’Raghallaigh’s would withstand Roche’s final flurry of goal chances to hang on to their Intermediate status for 2022. While setting Roche up for a mouth-watering relegation final against Naomh Fionnbarra this evening.