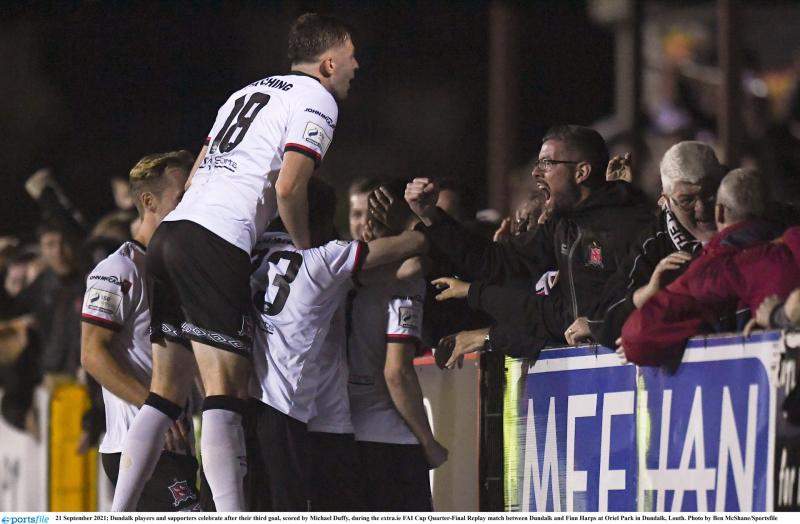 Dundalk players celebrate a goal against Finn Harps with supporters, who have returned in big numbers to Oriel Park since restrictions on attendances were lifted. (Pic: Sportsfile)

It’s been a great week at Oriel as two wins, one in the cup and the other in the league have boosted the team’s engine power and raised the confidence that they can avoid the play offs and also maybe qualify for the FAI cup final for the seventh year in a row.

Last Tuesday they faced into the cup replay against Finn Harps without a large number of players, some due to a virus, some due to continued injury.

On Friday they were still crippled with players out through illness and also injury. Yet they hammered Sligo Rovers 4-1, a team that only a week before beat them 2-1 at the Showgrounds.

Both of this week’s games had everything. It included passion, determination and growing confidence. With Peter Cherrie in goals Dundalk looked much sounder at the back. He organized his defense so well.

He roared out the commands in both games. He’s had such an impact that the team’s defending has improved vastly. The midfield has been rejuvenated and the striker or strikers are being fed the ball much better.

But the crowd too has played a major part. Having the supporters back for Tuesday instilled an atmosphere similar to the Kenny/Perth days. On Friday it was similar in nature as the atmosphere was electric.

Vinny Perth urged the crowd on in the last minutes. His secret 12th man did not disappoint him as they got behind the team throughout and especially in the final minutes.

Against Harps Dundalk did go a goal behind after just six minutes with the Donegal hero from the previous Friday Sean Boyd netting. But a Sean Murray goal six minutes from the break, a second half penalty from Pat Hoban in the first two minutes of extra time and a Michael Duffy goal on 105 minutes won it for Dundalk to send them into the last four.

Under 19 player Mayowa Animashun was top class at centre half. He could easily be taking up that position quicker than he realizes. He was excellent. Sean Murray was once again top class, as was Michael Duffy. The whole team were simply at their very best.

At the end of the game Vinny Perth skipped onto the pitch, arms in the air, like a father on the dance floor celebrating a happy family event. The emotion was so understandable.

With so many players out through injury and illness it looked at times as though the final part of the season was going to be about the relegation scrap. Now they have a cup semi-final tie against Pat’s at Inchicore to look forward to.

Michael Duffy’s goal was the highlight of the night as he drove a superb free to the net on 105 minutes from the edge of the box. The good old time memories of better days came flashing back.

Last Friday Dundalk recorded their first league win since July when they beat third placed Sligo. The illnesses and injury worries in the Dundalk camp were so bad that Vinny Perth did not pick his team until 6pm on Friday evening.

He wisely decided to leave the injured Michael Duffy on the bench and wait until the second half to bring him on. Duffy tormented Sligo’s defence so much they simply ran out of steam.

Sean Murray opened the scoring on 12 minutes. He reminded me of cat waiting to kill its prey in the long grass. Murray inched forward, his eyes firmly on his prey. Will Patching knocked the ball to Sami Ben Amar. He got his cross in from the right.

Michael Duffy saw his cross in the 53rd minute go in off the boot of Pat Hoban although it was recorded as an own goal by John Mahon.

Hoban should have been awarded the third goal. But he got his own goal and Dundalk’s fourth when he unleashed an unstoppable 20 yard effort from that nearly burst the net.

So Dundalk recorded their first league win since July and only their fourth under Vinny Perth. Dundalk are still a point behind Waterford in the chase to get out of the play off place.

The fight, the talent and the ability are there for all to see in the team. They can get away safely from the drop zone. But it will be a battle to the death with Waterford.

The Blues also won on Friday and that shows Dundalk that they must win every game that they can to ensure the Waterford men do not power away from them.

On the draw for the cup semi Final Vinny Perth told me they will approach it like they do every game. The Dundalk boss knows winning games in the league are more important as it will give the team a good chance of getting away from relegation worries.

He knows Pats away in the cup semi final will not be easy. But his side always seem to get the hard games in the cup.

The last time the two sides met in a cup semi Final was in September 2012 at Oriel. Just like now Dundalk were in the play-off zone then. They were hammered 4-0 by the Dublin club. Dundalk went on to win their promotion relegation play off place by beating Waterford over the two legs.

Two months later Stephen Kenny arrived and the rest is history. Waterford were drawn away to Bohemians in the other semi final. Hopefully they can beat Bohs and Dundalk beat Pats in the other.

We would have a repeat of the 1979 cup final that Dundalk won 2-0. I always remember the late Sean Byrne getting Dundalk’s first goal. That Dundalk team were special.

They were the first to win a league and cup double at the club. Sadly Sean Byrne, the first goal scorer passed away at a relatively young age. He was nicknamed Yorky as he was a truck driver. The Yorky chocolate bar advert had a truck driver featured in it. Hence the nickname.

He was a magnificent midfielder. Sean moved to New Zealand where he continued playing his football. As far as I know he continued to drive as a trucker.

But he was taken far too young from us. Everybody from that era remembers him. For the semi-final draw all I hope is that it is not an all Dublin final. The Dublin media would have the mother of all celebrations were that to happen.

Dundalk have the talent to get out of the mess they are in. Vinny Perth spoke highly of all his players on Friday night. Again he accepted that his 12th man had delivered for him again on Tuesday. He described the Dundalk fans as phenomenal.

He was very happy with Sean Murray and his contribution. Perth was hopeful his midfielder can now escape injury for the rest of the season. Sean Murray gets the goals when he gets the assists. He got them Friday.

The fact that Perth has had to use the same 10 or 11 players due to Covid and injuries has helped Sean Murray find his form. Murray at times has not been able to get through all the games because of injury.

The fact that he has got through any game he’s been playing without being injured has given him a massive confidence boost. Manager Vinny Perth confirmed that Murray was injury free and the player himself believes it has helped him.

With Greg Sloggett, Will Patching and Michael Duffy there with Murray they can get out of this horrible playoff position. If Dundalk can keep most of these players next season and add to the squad they have the makings of a team that can firmly stamp an impression in the league.

Dundalk meet Finn Harps once more next Friday. Harps will be out to avenge the cup defeat. It’s a huge game for Dundalk. I think they can get the three points. Anyway, please have a good but safe week.