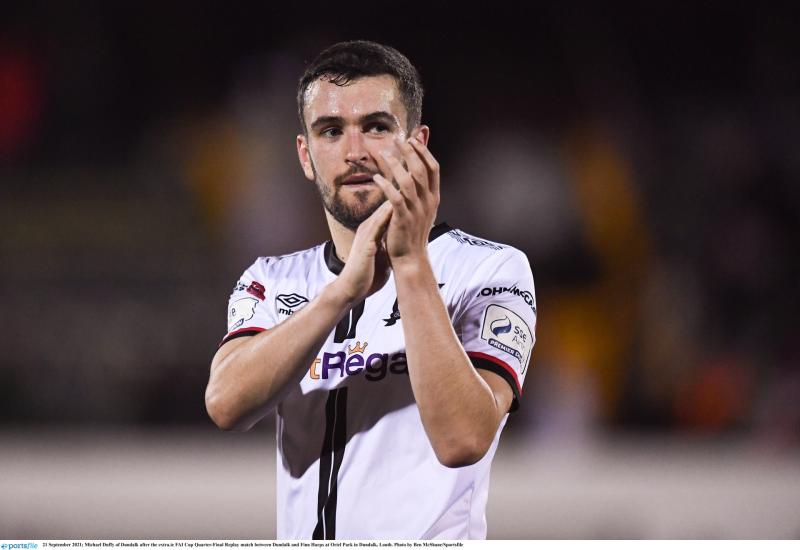 In what has been a huge week for Dundalk on the field as they went three games undefeated at Oriel Park, off the field supporters have been left gasping after the breaking news this afternoon that influential midfielder Michael Duffy is set to leave the club when his contract expires at the end of the season.

Derry City has today confirmed in a short statement on their website that Duffy will return for a second spell at what is his home town club, having left the Candystripes back in 2015 to join Celtic. He has signed a pre contract agreement that will see him remain at the club for the next four years.

After two loans moves while with the Glasgow giants, the 27 year old was brought back to Irish football by Stephen Kenny and Dundalk in 2017 and has been an ever welcomed presence in the side ever since.

His most memorable season with the Lilywhites came in 2018 where the club did the League and Cup double, while Duffy himself had the honour of winning the PFAI Players Player of the Year Award. He has scored 52 goals and bagged 86 assists in 198 appearances in all competitions for Dundalk.

Duffy is the second player this season to sign a pre contract agreement with Derry City, with Patrick McEleney also headhunted by former Dundalk coach Ruaidhri Higgins earlier this year while former club captain Chris Shields departed Oriel Park over the Summer having agreed terms with Belfast side Linfield.

Gardaí investigating the burglary of a jewellers in Ardee this morning

Her brother, Darragh, spoke with RTÉ's Drivetime to pay tribute to Eileen yesterday