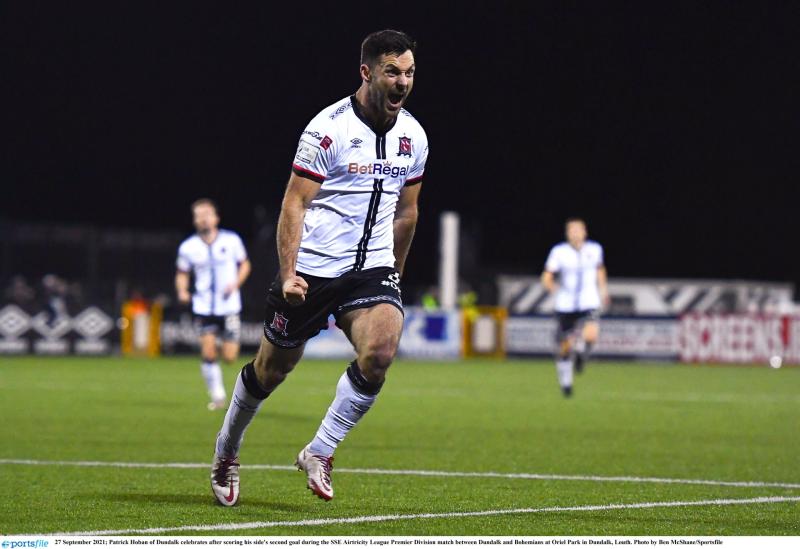 Dundalk FC lifted themselves out of relegation danger in the SSE Airtricity League after they recorded a 2-1 win over Bohemians in what was an entertaining match at Oriel Park.

Goals in either half from Sam Stanton and Patrick Hoban had put Vinny Perth’s side in total control, but Tyreke Wilson’s 71st-minute strike ensured a nerve-racking finish.

A close first half was perhaps edged by Dundalk, but it was Bohs that had the first shot inside 15 seconds when Conor Levingston’s audacious attempt dipped just over the bar.

Though the visitors were enjoying good spells of possession, Dundalk were creating the better chances – starting with Darragh Leahy’s skied effort from just outside the box.

At the other end, however, Greg Sloggett’s misplaced pass was picked up by Keith Buckley, but the Bohs captain’s shot was comfortably kept out by veteran Peter Cherrie.

Dundalk almost went ahead on 14 minutes when a good Leahy cross from the left was headed onto his own post by Levingston, who was under pressure from Sean Murray.

Stanton was covering a lot of ground and after his long ball down the left flank, Hoban outmuscled James Finnerty before his final shot was pushed away by James Talbot.

The hosts took a deserved lead right on the stroke of half-time after Michael Duffy played it into Stanton, who brilliantly turned Finnerty before firing into the roof of the net.

That was the industrious Scotsman’s first goal for the club and it could hardly have come at a better time, as Dundalk looked to lift themselves out of the bottom two on the night.

Dawson Devoy saw two shots go over in quick succession; while at the other end, Stanton – after combining with Duffy – had a low effort tipped around the post by Talbot.

Despite that magnificent save, Dundalk doubled their lead on 59 minutes from the resulting corner which eventually found its way to Hoban, who took a touch before unleashing a volley from outside the box which gave the Bohs goalkeeper no chance.

Bohs should have pulled one back immediately after that when Liam Burt’s low cross from the left was turned over by Georgie Kelly when it looked much easier to score.

Linked with a move to Oriel at the start of the year, Talbot produced a superb double-save to deny Hoban from point-blank range before saving from Murray’s follow-up.

Burt turned over from Ali Coote’s delivery not long after that, but Bohs did pull a goal back on 71 minutes through Wilson, whose shot went through the Dundalk rear-guard.

The Gypsies threw the kitchen sink at Dundalk after that and Cherrie did brilliantly to deny Rory Feely, as this rip-roaring Monday night contest entered its closing stages.

However, Dundalk held on to lift themselves into eighth-place in the league standings.

GET ENTERING! The search is on for Louth's Next Superstar