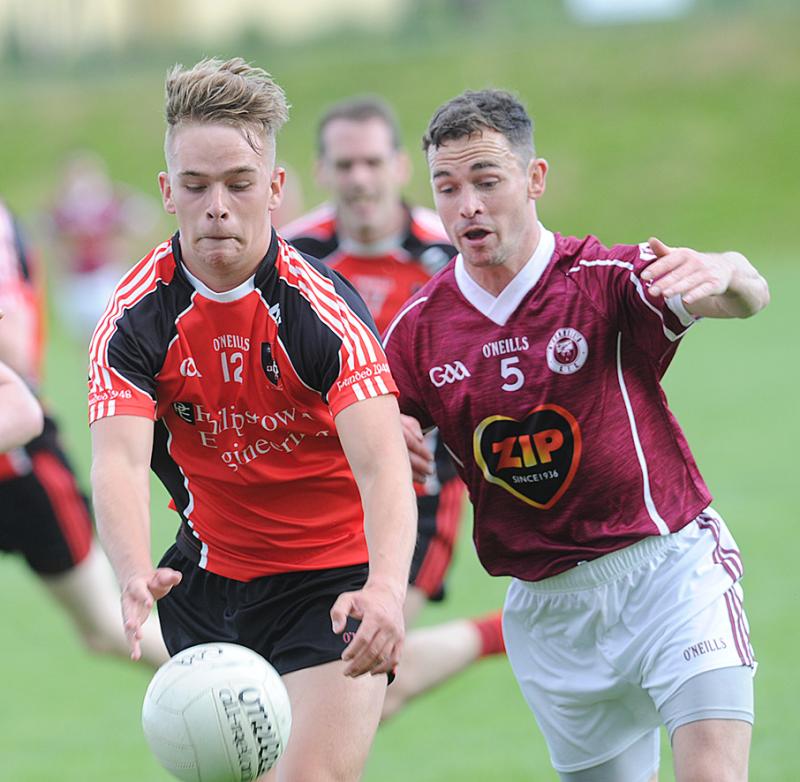 St Kevins advanced to the IFC quarter finals, after two first half goals sent them on their way to this seven-point victory over Clan na Gael in this Group B Intermediate clash.

Despite losing talisman Cian Callan to injury in the build up to this game, the 2016 Junior Champions were full value for this victory, with the free taking from the excellent Lee Crosbie an outstanding feature throughout on this manicured Stabannon Parnell’s turf.

With Aaron Khan driving the team on from number six, the Kevins broke the lines and opened the Clans up time and time again, despite the Dundalk side operating with Paul Gore as a sweeper.

Young midfielder Evan Maher deserves huge credit, as he leapt into the air to catch some terrific kickouts, one of which led to the goal for Lee Crosbie which sent the Kevins on their way to a 2-9 to 0-5 lead at the break.

Robbie Curran kicked two early frees, either side of setting Gavin Gaffney for a point from play to put the Clans 0-3 to 0-2 ahead after 10 minutes, but that was as good as it got for the Dundalk side.

With three consecutive points from the Crosbie brothers which started with a gorgeous kick from distance by Seanie and two Lee frees, the Kevins were 0-6 to 0-3 in front.

Seanie Crosbie then set up the lively Patrick Clarke to raise another white flag, while Shane Meade showed his marker a clean pair of heels to stretch his side’s lead to four points just after the water break.

The Kevins won 11 of their 16 kickouts over the hour, one of these kickouts was plucked magnificently in the air by Evan Maher who laid the ball off to Patrick Clarke who was running off the shoulder.

Clarke drove at the Clans defence, before finding Lee Crosbie who drove the ball passed Cillian Rice to strike the first blood in this do or die group stage encounter.

Along with kickouts, the Kevins also turned the Clans over 12 times in that half, with the Clans only turning them over five times in comparison.

The Clans response was a Stephen Coleman effort from distance, before the Kevins raised another major through corner back Darren McMullan who latched onto Tom Mathews lay off to drive low to the net.

The Kevins always had men running off the shoulder and willing to break the lines when the openings came and Karl Martin’s point from play exemplified that before another Lee Crosbie free gave the Phillipstown side a commanding lead at the break of 2-9 to 0-5.

The second half saw the Clans abandon the sweeper and move the ball direct into the inside line, with second half sub, Ray McCabe playing at 14.

The move nearly worked out as from a long ball kicked deep into the square, Conall McKeever smacked the crossbar. McKeever was still on hand to set up Billy Smith for a point, trading scores with the impressive Evan Maher. Patrick Clarke then once again stretched out that Kevins lead to 11 points heading towards the 40th minute.

However, the Kevins would fail to score again until five minutes from the end of proceedings wasting several presentable goal chances in that time, as they continued to break the lines and open the Clans up.

The Clans to their credit refused to throw in the towel and five scores on the bounce either side of the water break from Robbie Curran (2), Billy Smith (1), Gavin Gaffney and Mark McGeown did close the gap to six.

A late block by the Kevins rear-guard also denied Mark McGeown as Niall Callan’s side finished the game out with scores from Lee Crosbie and Patrick Clarke to set up a quarter final date with Hunterstown Rovers this weekend, despite having Shane Meade sent off late on.