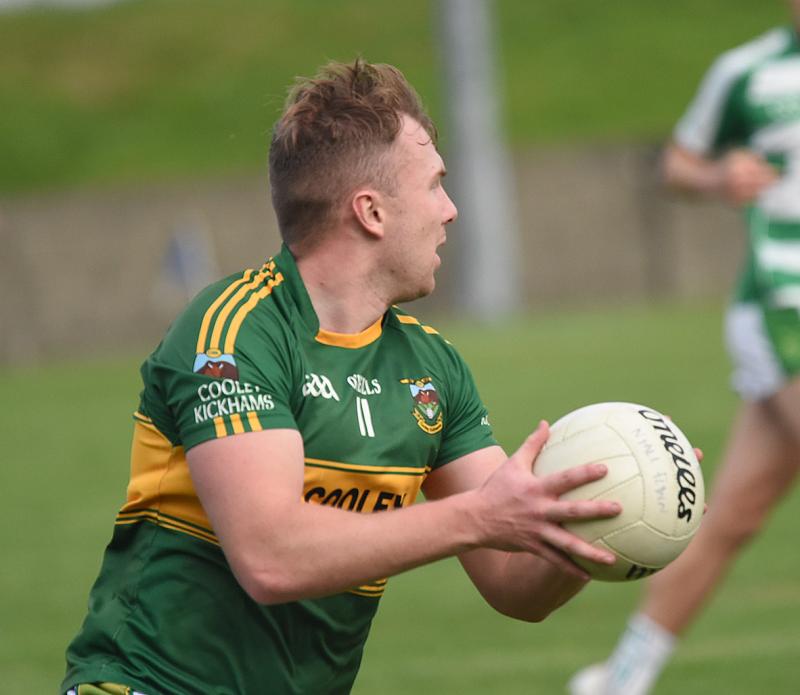 Fergal Malone, one of Cooley's sharpest forwards in the second half as they accounted for the O'Raghallaighs in a high scoring affair in Dunleer. (Pic: Arthur Kinahan)

In one of the most entertaining matches of the Intermediate championship, Cooley Kickhams narrowly booked their place in the Quarter Finals with a four point win over the O’Raghallaighs in Dunleer.

Just a point separated the sides at half time before the game really shot into life in the second half with six goals scored. The men from the Peninsula were able to keep their opponents scoreless in the final 13 minutes to seal a date with Dundalk Young Ireland’s this Saturday.

Cooley started off the contest the brighter, their forwards looking sharp and moving nicely as scores from Patrick Johnson, Darren Marks and Gerry Malone had them 0-3 to 0-0 score up after 10 minutes as the Drogheda men struggled to deal with their movements.

They did slowly creep into the contest with James Moonan and Eoin Moore getting them on the scoreboard but Cooley looked comfortable at they went into the water break 0-4 to 0-2 in front.

Johnson quickly increased their lead seconds after the restart and when further scores came in quick succession from Cian Connor and Aoghan McGuinness it looked like this could be a very one-sided contest.

They bagged eight marks and managed to turn over possession time after time from the Cooley kick outs allowing the South Louth side to regain a foothold in the match through points from Ben Rogan, Kyle McElroy, John Horan and Danny Morgan yet they still trailed by 0-9 to 0-8 at half time.

This was when the goal fest began, a loose Cooley pass giving possession back to the Drogheda men with a long ball finding danger man Rogan just outside the square. He duly teed it up for the inrushing McElroy to blast home as they took the lead for the first time.

To their credit the Peninsula side reacted well to this setback, they began going shorter from their kickouts to negate the fielding prowess from the likes of Daniel Reilly and Eoin Moore and shot three scores in a row to regain the lead. But another setback was coming.

Once more utilising the mark to great effect, O’Raghallaighs posted two goals inside sixty seconds of each other. Marks from Reilly and Moore were bombed into the forwards and resulted in well taken strikes by Chris Smith and Ruairi Moore.

By the second water break Cooley trailed by 0-17 to 3-9, again a goal negated by three points in a row but more was to come. After the stoppage they hit 1-1 in quick succession, the goal by Michael Rafferty putting them back in front.

In a game you just couldn’t take your eyes off of, much more was to come in the final quarter, the same tactics working a treat again for the Townies as Rogan bagged a second assist for McElroy’s second of the day.

However they would score just once more for the remainder of the contest, 1-2 without reply in the end from Cooley showing their extreme desire and never say die attitude as they held out for the win.

The final score in this feast of football was of course a goal, as substitute Rafferty bagged his second of the day in finishing off a devastating counterattack from defence to attack on 56 minutes.

Despite the late dismissal of Malone to a second yellow card, they remained tight at the back through the near six minutes of added time to bag a well-earned victory and a quarter final matchup with Dundalk Young Irelands this Saturday in Dowdallshill (Throw in 4 30PM).