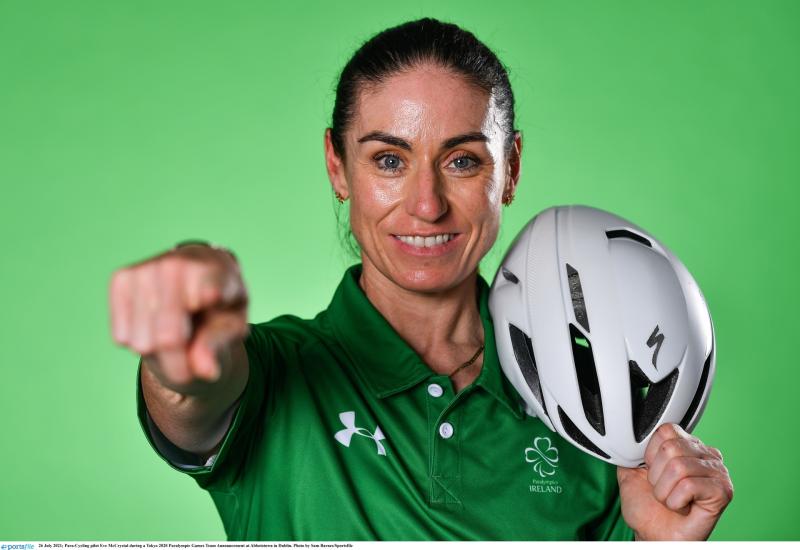 On Tuesday afternoon the third largest sporting event in the world officially got underway as the National Stadium in Tokyo played host to the opening ceremony of the 2020 Paralympic Games.

The games are a chance for those with different disabilities to compete at the highest of levels, taking on the best of the best, the cream of the crop from all over the world. Each dreaming of having that prestigious gold medal being put around their necks come the end of their event.

Just like in London in 2012 and Rio in 2016, Dundalk will have one of their own fighting it out for medals as Eve McCrystal heads to the Far East as the sighted pilot of Katie George Duleavy in the tandem cycling events.

“I steer the bike, Katie has no gears or brakes, all she does on the back of the bike is pedal and put power through the bike” explained McCrystal. “I add power to propel the bike but also steer, select the gears, make the moves and make the decisions.”

“There is a lot of communication that would happen between the two of us where I would tell her if there was a dodgy bend coming up or we are in a race and I’m trying to move with it and follow them, but at this stage Katie knows by my body language what I’m doing and wouldn’t have to ask.”

The team have always been a great pair, as was seen in Brazil five years ago where they struck gold in the Time Trial and bagged a silver in the Road Race event. They were also UCI World champions in the Time Trial from 2017 to 2019. For years gold has been their favourite colour.

However these games will be a new experience for Eve and Katie, who for the first time in years are no longer the best in the world. In a year where there was so little competitive racing, they could only manage a silver medal in the 2021 World Championships. Both in the time trial and road race.

That will not deter them, and the 43-year-old is confident they will use this setback as motivation to improve their position come Tokyo.

“You learn more from your losses then you do from your wins, we learnt from that race, we know what went wrong and we spoke to our coach and we fixed it.”

“It was our first race in two years, you have to remember that. I didn’t even really get any solo racing. Sometimes I’d get some solo races in and then race in the tandem but I didn’t even get that, so we had no season.”

“That is difficult, but the other girls didn’t have it either, we weren’t the only bike who didn’t have a season, the girls that beat us didn’t have any races and they won and hats off to them, it wasn’t our day but that’s sport.”

The Lack of races was due of course to the ongoing Covid-19 pandemic which has been wrecking the sporting calendar for well over 18 months.

Yet there have been some side effects to the crisis that ended up helping their preparation. From an extra year to train, to her partner Katie being able to relocate to Louth so they could work together regularly.

“She came over to Dundalk in March, she stayed until July so myself and herself were around the roads of county Louth for four months training, we’ve never had that before."

“It’s very different for Katie, I’m able to get up in the morning and go out on my bike, Katie can’t do that so she has never had 16 weeks of tandem riding, six days a week.”

“That’s something we’ve never had in our many years together because Katie lives in England and I wouldn’t be able to give my time away as the kids are in school. But the kids weren’t at school, I was at home like everyone else. I really think that it will stand to us, leaving us better prepared than ever before.”

The duo will compete in four events in total at the Tokyo Games, starting in the early hours of Thursday morning with the 1km Time trial before then tackling the 3Km Pursuit Race on Saturday. Both of those events will take place indoors at the velodrome.

Next week they will take to their favoured events on the road, the 34km Time Trial next Tuesday and the gruelling 95KM Road race on Friday.

In her third and final Games, the Dundalk cyclist is going to give it her all, but her overall feelings are she is extremely lucky to have the opportunity to even be involved with the games, having the chance to see first-hand the superhuman abilities of all those competing.

“I’m just so proud of myself and Katie because I know the work we have done, the stuff people don’t see. It is six to seven days a week, 20-25 plus hours of training and the ups and downs that come with doing that for five years.”

“There is always that extra humbling factor, as an able-bodied athlete to be among Paralympians and to see what they must do to present themselves on the World’s biggest stage. I’m just so thankful I’ve been given the opportunity; I’m privileged to be in that position.”