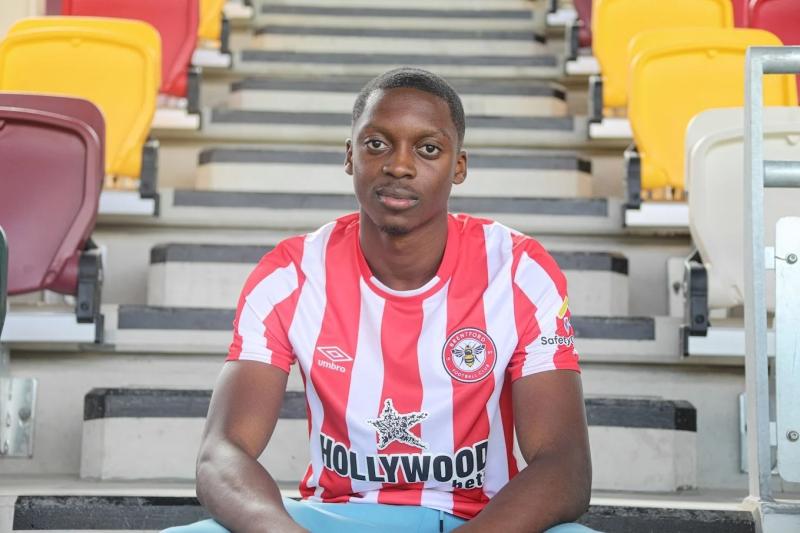 Val Adedokun in the colours of his new club Brentford. Credit: Brentford FC

Reports towards the end of last week linked the 18-year-old left-back to the London club, with Dundalk FC head coach Vinny Perth confirming that Adedokun was poised to leave.

Speaking after last Friday’s 2-1 home defeat to Drogheda United, Perth said: “Over the next 24-48 hours I expect to lose Val. We effectively lost him tonight. Ironically, he’s had a brilliant training week.

“It’s an amazing opportunity for him if it comes off. He’s a credit to this club. We signed him from Malahide as a 15-year-old with Tiernan Mulvenna and he’s come through the 17s, 19s.

“Val has an amazing opportunity and I think we owe it to him to give him the best chance to do that, so hopefully it goes well for him over the weekend if that can be tied up.”

The Dubliner, who is eligible to represent Nigeria through his parents, signed a two-year contract with Dundalk in March, meaning The Lilywhites will receive compensation.

“It’s a really good deal for the club. We’ve protected ourselves in that sense. We put him on a contract back in ’19 if I remember and it was Tiernan Mulvenna that was pushing me to do that at the time to be fair to him. It’s meant he’s under contract and we’re well protected.”

Adedokun was an unused substitute in last Friday’s loss to Drogheda, but has made seven appearances in the SSE Airtricity League since first signing professionally in 2020.

“I’m very proud of what I achieved with Dundalk,” said Adedokun. “I’m very thankful to everyone at the club who gave me the opportunity to play first-team football at a young age and that has helped me to mature on the pitch and off the pitch.

“I'm pleased to join Brentford,” he added. “It's been a goal of mine to get across to England and play for a club like this. To get this opportunity is more than I could have dreamed of.”

Adedokun has signed a three-year deal at Brentford, with the option of a further year.