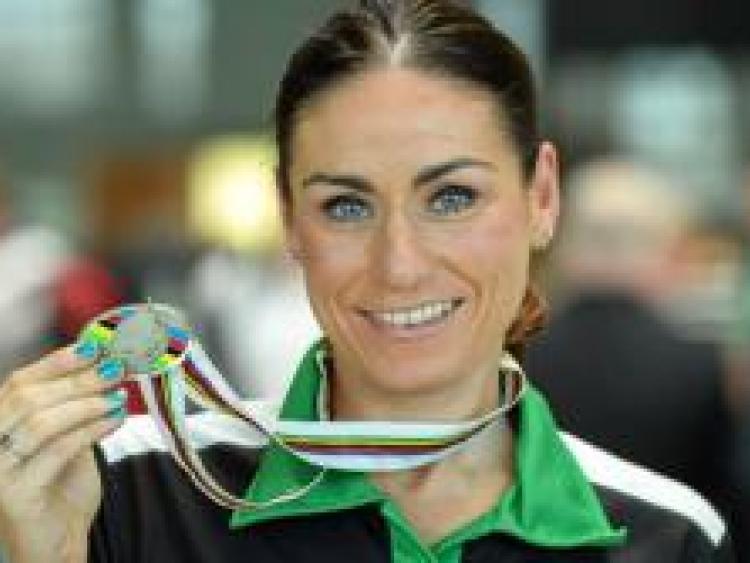 Eve McCrystal can put her sporting accolades up there with anyone, from completing gruelling Ironwoman triathlons to success on the bike as a National road racing champion, many of which were achieved while either raising her two daughters or juggling training with her work as a guard.

However, her most notable achievement came in 2016, where along with Katie-George Dunlevy she won a gold and silver medal at the 2016 Rio Paralympic Games competing in the tandem cycling road race and time trial as the sighted pilot.

The Dundalk native was a late bloomer to triathlon racing before eventually focusing her attention to two-wheeled action due to family commitments, a decision that ultimately led her to becoming involved with the Irish Paralympic team.

“I started locally with the Setanta Triathlon Club, about 14 years ago then went onto Cuchulainn Cycling club after that” she recalled. “Of the three disciplines swim, bike and run, I was always strongest on the bike so when I had my girls, I couldn’t do the three sports so I picked cycling.”

“I went to the National championship in Carlingford in 2013 and I medalled there and on the back of that medal I was asked to try out for the position as the sighted pilot in the tandem events.”

While her success in Rio will always live long in the memory as one of her greatest achievements, a more recent accomplishment that meant just as much to her happened last October at the National Championships in Limerick.

After years of coming up short, McCrystal turned over the young field with a staggering performance that saw her complete the 24.4 km Time trail course in 29:01 to finish 21 seconds clear of her nearest rival and take the gold in an event she medalled in five times previously since first competing in 2013.

“When lockdown happened in March, I just put my head down and never worked as hard in my life, so it was great to achieve that eight years later, in my head I felt I needed to be a national champion before even thinking about the Paralympics”

Despite having pretty much done all there is to do in the world of cycling, the 43-year-old continues to find inspiration to race again and again, stating it was creating short term goals that has kept her determined to achieve more from the sport.

“I keep my goals short which helps to motivate me, the idea of coming home to the kids with the medal now that they are a little older and can understand it, that’s what inspires me now.”

“I would be motivated for Tokyo, that’s the short-term goal but when Tokyo is over I can’t wait to put on a set of goggles and runners on me and get back to triathlon, I’m already thinking of that so I’d be striving for that too.”

McCrystal currently holds cycling seminars over Zoom every Wednesday night to help other women develop their skills, yet despite her success she is humbled by the impact her triumphs are having on others.

“I get a lot of messages saying they love following my journey and they get motivated through me and that is very humbling, because I’m just a mam getting up in the morning shouting at their kids to get up like every other mother and then I’m just riding my bike.”

“I don’t feel like what I do is amazing but to other people it is and if that motivates them to do something for themselves and make them content, helping them get through the day than I’m really happy I’ve done that.”