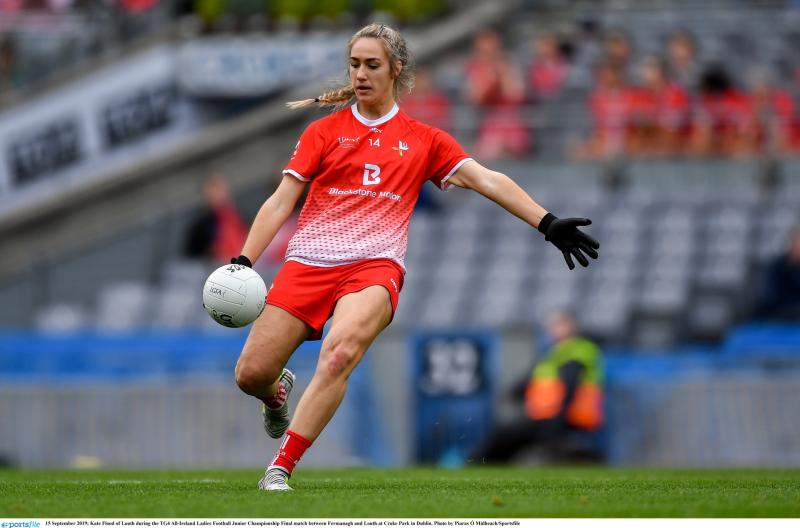 Kate Flood notched 1-4 in an impressive performance against Sligo

Patrick Flaherty at Sligo IT

Despite leading for much of the contest, the Louth ladies had to settle for a draw at a wet and windy IT Sligo.

Having started the half strongly, The Wee County found themselves behind going into the final moments only for Rebecca Carr and Kate Flood to show great composure with two late frees to earn their side a valuable point.

The visitors, with the elements in their favour started the brighter, calmly going through the phases and moving the Sligo defence out of position, allowing them to open up spaces to shoot and utilise the wind.

This resulted in five scores in a row from the boots of Niamh Rice, Laura Collins and Jenny McCourt to build up a 0-5 to 0-0 lead after just seven minutes.

The home side were struggling to even get out of their own half, needing their marquee forward and best player on the day Katie Walsh to drop back into midfield in search of possession. Through her interventions Sligo pegged back two scores as she both created and bagged two frees.

Just as they looked like getting back into the contest Louth negated their comeback with a goal, some superb fielding from Niamh Rice teed the ball up for Kate Flood. Her attempt from distance would drop short and into the net as the Wee County went six clear.

A point apiece left it 1-6 to 0-3 at the first half water break, after which the scoring opportunities dried up for the Girls in Red. Three in a row from Sligo narrowed the gap before a nice score from distance from Flood left Louth four up at the break, 1-7 to 0-6.

Sligo upped the intensity in the half, Rosin Molloy bagging a score seconds after the restart. Suddenly Louth had to work much harder to get and keep the ball with many of their forwards dropping back to help negate a home side which had gone up a few gears.

Flood bagged her third point from play on 37 minutes, before another prolonged period without a score which lasted almost 20 minutes. Walsh was terrorising the Louth defence, coming from even deeper positions now, her solo runs a constant threat as she bagged free after free.

Her efforts were rewarded with a goal on 45 minutes, the Tourlestrane clubwoman soloing past three defenders before unleashing a bullet towards the top corner of the net which Una Pearson had little chance of ever stopping.

The game was much scrappier in the second half, with a lot more frees handed out by referee Kevin Corcoran, as scores very much became a premium.

Two more points from Walsh saw Sligo go into the lead for the first time on 56 minutes, but Louth were able to dig deep into the well just when they needed it most.

Substitute Seona Galligan managed to get free in the corner and her darting run along the end line saw her being fouled from close range. Rebecca Carr duly tapped over Louth’s first point from a place ball.

Sligo regained the lead soon after before Carr again was Louth’s saviour, winning a vital free that was converted by Flood resulting in the points being shared.

It will feel like a point dropped for Wayne freeman’s troops, having led for so long and they even had an extra player on two occasions with Rachel O’Brien and Maeve Casserly sent to the bin late into each half. Sadly, those sinbins had little impact on the final score.