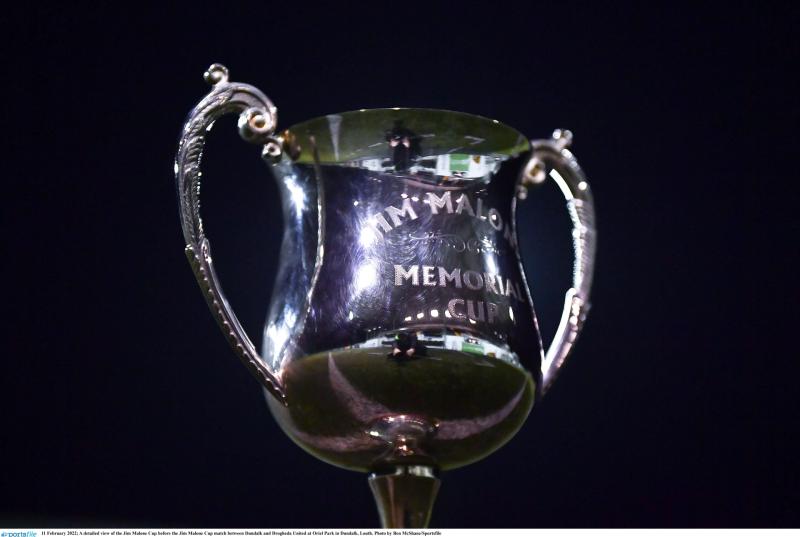 The Jim Malone Cup, which tonight was won by Drogheda United for the first time since 2014. (Pic: Ben McShane/Sportsfile)

Drogheda United lifted the Jim Malone Cup for the first time since 2014 thanks to a 2-1 win over Dundalk FC at Oriel Park on Friday night.

A first-half goal from James Clarke and a Chris Lyons penalty in the second period put Drogheda in command, but a late strike from David McMillan gave Dundalk some hope of retaining the trophy that had been in their cabinet since 2015.

It was the Oriel crowd’s first opportunity to welcome new head coach Stephen O’Donnell – and his new-look side started the brighter of the two, without creating anything of note.

They finally fashioned the game’s first real opening on 20 minutes when after some excellent link-up play between Robbie Benson and Joe Adams, the latter fired just over.

However, it was Drogheda that took the lead on 32 minutes through Clarke, who crept in to head home from a Dylan Grimes corner after some slack defending from the hosts.

Dundalk could have levelled six minutes into the second half when an incisive pass from Patrick Hoban found its way to Daniel Kelly, who showed tremendous pace and composure to fend off Keith Cowan before being foiled by visiting goalkeeper Sam Long.

However, Drogheda were awarded a penalty by referee Derek Tomney, who penalised Mark Connolly for a needless foul inside the box on Lyons – and he subsequently dispatched on 72 minutes despite Dundalk substitute Peter Cherrie guessing correctly.

Dundalk got themselves back into the contest six minutes from time when a delightful ball from Keith Ward was poked home by McMillan, but despite a grandstand finish, which encompassed 10 minutes of stoppages, Drogheda held on to lift the trophy.

BREAKING: €4.1m for sports clubs in Louth - breakdown for each club