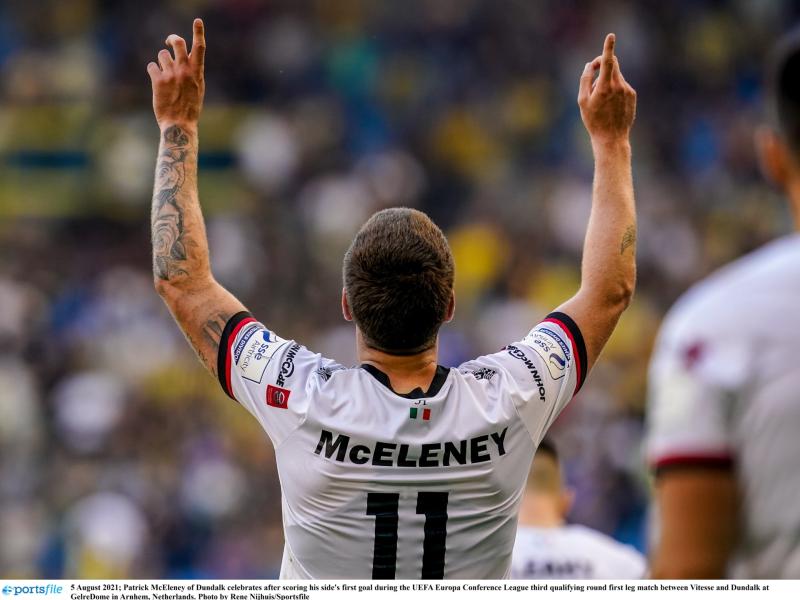 Dundalk FC recorded a remarkable 2-2 draw in Arnhem on Thursday night in the first leg of their Europa Conference League third-qualifying-round tie with SBV Vitesse.

Things could have been very different for The Lilywhites, however, as the slick Dutch outfit peppered the outstanding Alessio Abibi’s goal in the first half, but only had Slovakian international Matus Bero’s 20th-minute strike to show for their dominance.

Indeed, Vinny Perth’s side stunned the confident natives on 65 minutes through Patrick McEleney’s header, before the Derry man put Dundalk ahead just over ten minutes later.

Lois Openda equalised for the Eredivisie side two minutes from time, but was shown a straight red card by Greek official Anastasios Papapetrou late on for kicking out twice in frustration at Sam Stanton, as Dundalk held out for what was an unbelievable result.

More impressively, they did it without their star performer in Europe this season, Will Patching, who was a late withdrawal from the team after he picked up a stomach bug.

However, Michael Duffy took his place in the starting line-up after missing both legs of the second-qualifying-round success over FCI Levadia due to a Covid-related issue.

Vitesse dominated the first half, but Dundalk did have an early opening with Daniel Kelly’s dangerous cross from the right having to be dealt with by Markus Schubert.

At the other end, former Dutch international Riechedly Bazoer fired in a shot from distance which flew just over the top of Abibi’s crossbar, and the Albanian goalkeeper had to save twice from Maximilian Wittek and Yann Gboho throughout the early stages.

The Dutch side went ahead not long after that when from a swift counter-attack, Million Manhoef ran half the length of the pitch before feeding Bero who finished brilliantly.

Dundalk almost responded immediately in what was by far their best chance of the first half through McEleney, who curled his long-range effort off the frame of the woodwork.

Vitesse laid siege to the Dundalk goalmouth after that and Gboho turned a shot wide; while Manhoef and Openda both saw their respective attempts go agonisingly off target.

Abibi kept the visitors in the tie going into half-time – first foiling Nikolai Frederiksen after another counter, before keeping out Bero’s shot which looked destined for goal.

Early in the second half, Abibi made another fine stop, brilliantly tipping Tomas Hajek’s header over the bar after the Czech defender had got on the end of Wittek’s corner.

The impressive Bazoer rifled a shot off the post, while the unmarked Danilho Doekhi headed over from close range after getting on the end of Wittek’s set-piece delivery.

Still only 1-0 down, Dundalk were beginning to grow in confidence against their Dutch counterparts, as the ball broke kindly for Greg Sloggett in a dangerous area, but he unfortunately couldn’t get enough purchase on his attempt as Schubert saved easily.

The unplayable McEleney was Dundalk’s brightest spark on the night, and his first-time shot from a Raivis Jurkovskis pass was easily gathered by Schubert, but both players once again combined for what was a well-worked leveller after 65 minutes had elapsed.

Fresh off the bench, Patrick Hoban teed up Jurkovskis on the right, and the Latvian international whipped in a pinpoint cross that was guided home by McEleney’s head.

Still reeling from that concession, Vitesse incredibly fell behind on 76 minutes when Hoban played McEleney through on goal, and he floored Doekhi before exquisitely dinking the ball over the helpless Schubert, as Dundalk defied the odds in Arnhem.

A stunned Vitesse desperately went in search of an equaliser, and after being set up by Oussama Darfalou on the edge of the box, Oussama Tannane’s shot was deflected over.

Vitesse found their leveller in the 88th minute when Wittek’s ball into the area wasn’t dealt with by Sonni Nattestad and as a result, Openda was allowed to finish with ease.

Despite equalising, Vitesse would have been bitterly disappointed overall, and their frustrations bore through when Openda received a straight red card for lashing out at Stanton, which means the Belgian will miss next Thursday’s return at Tallaght Stadium.