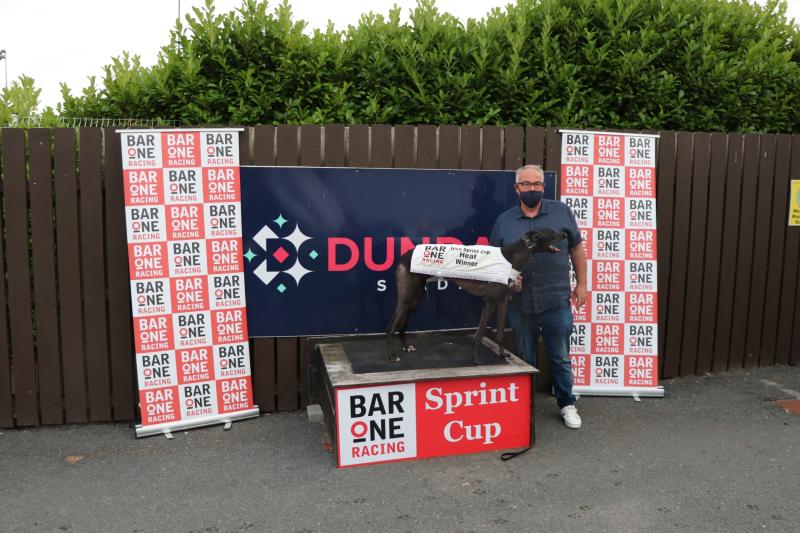 Corback Prince, who will go into semi-finals of the Bar One Sprint Cup as one of the favourites

Corback Prince is the one to beat as the Bar One Racing Irish Sprint Cup moves to the semi-final stage at Dundalk Stadium. The Robert Gleeson-trained speedster not only ran faster than any of the others in last Saturday night’s quarter-finals, he did it from an unfavourable inside draw.

While three of the 25 races run so far in the €20,000-to-the-winner Classic have been won by the red sheet  - one more than trap 5 and just one fewer than 6 ( trap 3 is the leading berth with seven winners) - the number of slow-starters from one, in graded races as well, has been noticeable.

Corback Prince, running for a kennel that previously tasted success in this competition, wasn’t first to show in the first of the quarter-finals, but he soon asserted his authority, taking the lead off Coolemount Boss before the opening corner.

The son of Laughill Blake went on from there to score convincingly in the fastest clock of the competition so far, 20.86, which is just two lengths off the track record.

The Gleeson runner has an unbeaten record in the competition, as has Good Cody, another quarter-final winner to beat the 21-second barrier. This Tipperary runner wore the three sheet, and proved too good for eventual second in the field attempting to preserve an unbeaten run, Maybe Aye.

The runner kennelled closest to the track, the Newry-based Blue Corner, caused a minor surprise in the fourth qualifier. Shortly after their compatriot, Brendan Matthews, collected the televised €20,000 Champion Stakes final with Da Machine, the father and son combination, Oliver and Thomas Shields saw their home-bred finish well clear of the warm favourite, Agent Stanley, clocking 21.15.

An even bigger outsider, 14/1 shot Ela Supremo, won the opening quarter-final in the manner of an odds-on chance. Peter Cronin’s charge flew from six, and with the others getting into a tangle at the opening corner, the Ballymac Best dog raced to a 4-and-a-half length win in his best-ever, 20.97.

The Shields’ runner is unlucky that he has drawn the inside in the opening semi-final, but is still not without a chance of advancing. Better placed – in three – is Corback Prince, who’ll be aiming to bring up his seventh successive victory, his three runs prior to his Sprint Cup challenge coming in 525s.

Corback could get an odds-on quote, and it would seem anyone wishing to back Good Cody in the other semi will have to ‘buy money’. This lad goes from two, and if, as reported, Brody’s Magic, drawn in trap one, won’t be taking his place due to injury, he should have a clear run to the opening corner.

The move has been welcomed by Sinn Féin TD for Louth, Ruairí Ó Murchú

Louth punter turns €5 Lotto bet into a lot of money