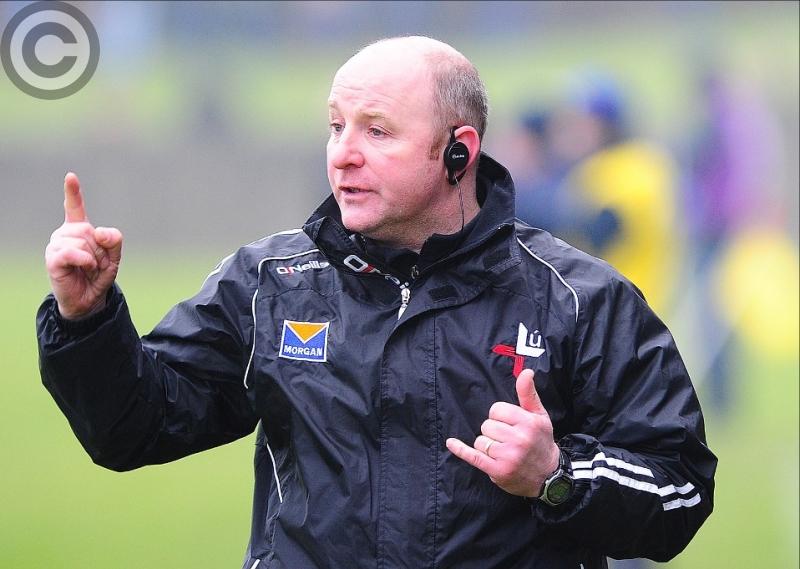 Operations Manager Francie McMullen confirmed the involvement of Kelly and others, as per The Democrat’s story from earlier in the week, saying the role had been left unfilled since the departure of Colm Nally some time ago to join Meath GAA and that Kelly was “the best option we’ve had” as a replacement.

St. Mochta’s delegate Paul Murtagh requested to know if the position was a paid role, which McMullen confirmed it was; although the latter was eager to get across that the majority - if not all - of the related funding would come from the provincial body as the vacancy is on foot of the East Leinster Project.

Chairman Peter Fitzpatrick, when pressed on the matter, said the fee involved amounted to no more than “expenses” and talked up the prospect of adding a man of Kelly’s experience and coaching ability to the set-up, his remit involving the development of U13-U16 players.

Yet Murtagh continued his probing. He maintained that he bore no ill-feelings for the former Louth forward but alluded to his previous involvement in various capacities, saying that he felt “fresh blood” was required and pointing to the underage success of Ardee St. Mary’s, Naomh Máirtín and Geraldines as proof that expertise lies elsewhere.

Mr Murtagh asked if the job was advertised, especially considering that it’s involuntary, with Mr McMullen confirming that it wasn’t, explaining that the approach was the same when Nally was handed the responsibility. It was about, McMullen insisted, “getting the best person”.

The Mochta’s delegate was strong in his belief that the vacancy still ought to have been advertised, commenting that if the protocol had to have been the same under previous chairmen, “there would have been war”.

“This is a money job”, he bellowed, instructing that the Louth County Board can no longer be giving out positions without a formal and due interview process. “My opinion is that Colin Kelly must be the only coach in Louth, because every time there is a job up he gets it; the seniors, the U21s. He went to Westmeath and Wexford against us. Now he’s got a job over all underage in Louth?”

“Who is in charge of Louth underage?” Murtagh asked.

“Of what section?” McMullen replied.

Murtagh spoke of a ‘tree’ formation in his place of work whereby there is a specified head with others filtered below in terms of seniority. He asked for it to be explained at the next meeting who exactly was at the summit, saying there were several who held “chieftain” status, mentioning specifically McMullen, Shane Lennon, Derek Crilly and now Kelly, “with not enough Indians”.

Furthermore, the Louth Villager demanded to know the “goals” of those involved on the coaching side of things, querying how their performance is measured. He said it should be brought to the County Board meeting monthly, insisting that “we want facts; what’s Colin Kelly’s role? Not, ‘to make Louth football better’, his actual brief”.

McMullen said he’d have no problem in explaining this whenever required.

Chairman Fitzpatrick took responsibility for the leakage of the information to the press, which Murtagh and Naomh Fionnbarra delegate Thomas McQuillan took issue with, prior to Wednesday night’s gathering.

He confirmed that there were other interested parties in the position but insisted that Kelly was “the best for the job; we’ve got a top quality man for the job and he does deserve a chance”. He refuted a claim that it was “jobs for the boys”.

Sean O’Mahony’s representative Pat O’Brien commended Murtagh on his contribution to the debate and for asking “straight questions”. He said that his fellow delegate wasn’t questioning Kelly, he was merely wanting to know why the opening wasn’t advertised.

“You came in under a banner of transparency, Peter,” O’Brien added, “you were going to tell us everything that was going on. This looks bad; it came out in the press and wasn’t advertised. For all intents and purposes, it wasn’t advertised. Francie said to Paul, ‘how do you know we didn’t ask anyone else?’ That’s not good enough. All we’re looking for is transparency.”

This triggered further debate over the lack of advertising with Fitzpatrick and Murtagh going back and forth.

Vice-chairman Seán McClean interjected, saying that most big companies “headhunt” for a “critical role”, as was the case in Kelly’s recruitment. Murtagh said that was “fine”, but supposed that if the Dreadnots man was “a failure”, “do we sack all of you, because you appointed him?”

After a chorus of laughter from the floor, Fitzpatrick said he would take ultimate responsibility.

Dreadnots delegate Anthony Murphy asked about Kelly’s working hours in the position and whether it included days or nights, and how many? Fitzpatrick said that he would be working with McMullen and Lennon, and that more clarity on the situation would be offered at the next meeting.

David Rogers, St. Kevin’s, was thankful for a “good discussion” and glad that the position which Kelly now fills has been established, saying that it’s something he’s long been calling for. He said every County Board employee’s working schedule must be made accessible and well-known going forward.

“This is a fabulous opportunity to get it right,” he added.

St. Brides’ Paddy Farrell recalled watching Kelly playing for Louth as an U16 and minor, and “carrying the team”, a trait, which Farrell believes, he’s taken with him throughout his involvement with Wee County teams.

Mr Farrell proposed an end to the meandering discussion and wished Kelly well, calling for everyone to back him.