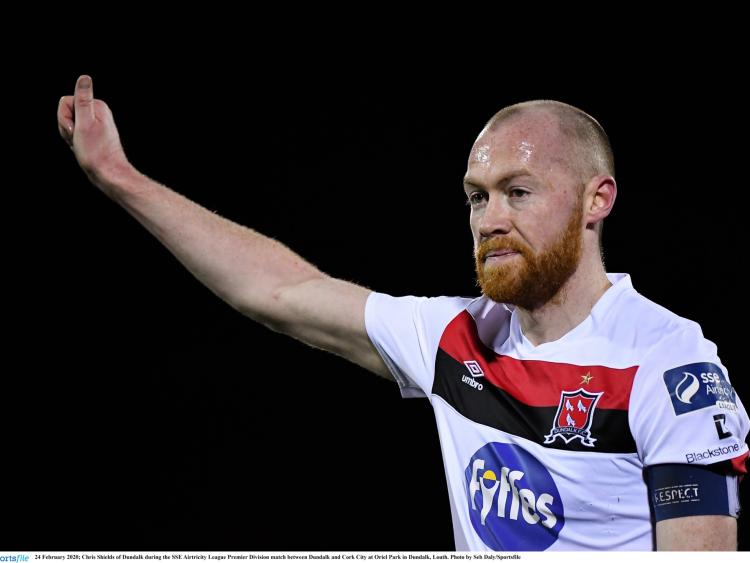 Chris Shields is, undeniably, one of the elder statesmen in the Dundalk FC squad, for he made his debut with the club eight years ago. (Pic: Sportsfile)

Now 29, Chris Shields is, undeniably, one of the elder statesmen in the Dundalk FC squad, for he made his debut with the club eight years ago, after moving from Bray Wanderers.

That particular season proved to be a difficult one for Dundalk and Shields, with the financially-crippled Lilywhites needing the reprieve of a play-off to consolidate their Premier Division status.

Few would have envisaged that, eight seasons on, he would still be at the club. Even fewer would have foreseen his development into one of the greatest midfielders in League of Ireland history.

Next up for the champions is a trip to Tallaght Stadium to take on Shamrock Rovers, the team most likely to knock Dundalk off their lofty perch, but Shields is unsure if they are, indeed, the only threat.

“I’d say they’d be up there and we plan on being up there ourselves, but look at us in 2013. Nobody expected us to be up there, so you can never really say that A and B is going to be challenging for the title.”

Shields, along with several current first-team players, have been winning trophies with Dundalk for a number of years and he believes that continuity has been a vital cog in the club’s frequent successes.

For example, two of those players happen to be Andy Boyle and Patrick Hoban, who scored on Friday night. Both players, with others, played in Dundalk’s last league visit to Tolka back in 2013.

“Vinny (Perth) said it himself in his team talk to us tonight (Shels away). Within the squad, there’s a lot of player-drive there, not for standards to drop. Even though Andy’s been away and came back, it’s like he never left, he’s still raising standards.

“There’s a core group there that have always been there and always drove that. Any new player that’s come in, has always got behind it and it’s what you need if you want to go and win things.”

Dundalk’s trip to Tallaght Stadium takes place on Friday night at 7:45pm and will be broadcast on RTÉ.